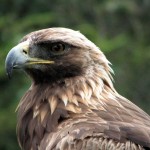 According to a new article published by the BBC, such is the case on the Isle of Lewis. Located in Scotland, Lewis currently boasts to have one of the highest eagle population densities in Europe.

Over the past few years, says Isle of Lewis estate owner Nick Oppenheim in the article, the human population of the estate has decreased. Over the same period of time, Mr. Oppenheim goes on to explain, the populations of white-tailed and golden eagles has increased on the island.

Now, a new energy project to build a 39 turbine wind farm on Lewis is being embraced by the owner and protested RSPB Scotland. The future of the eagle population is at the heart of the issue.

The full BBC article can be found here: