The MMPA prohibits U.S. citizens from removing marine mammals from US seas, and bans the import of marine mammals or marine mammal products into the country. The MMPA was passed by Congress in 1972, as a result of the realization that many marine mammals, such as polar bears, manatees, walruses, otters and sea lions, were facing extinction at the hands of humans. The act is designed to protect all marine mammals and their habitats, as well as replenish dwindling populations.

“It was the first law that we actually have that took into consideration whole ecosystems, whole environments, instead of just one species, “said Mike Weimer, in a statement referencing the anniversary of the MMPA. Weimer is Chief of the Fish and Wildlife Service’s Branch of Resource and Mapping Support. 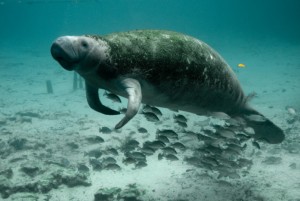 As result of MMPA protection many marine mammal populations, such as the West Indian Manatee, California sea lion, Pacific harbor seal and elephant seal, are no longer in decline and have steadily increased. Many of these marine animals are also now protected under the Endangered Species Act.

The 40 year anniversary celebration included a week-long series of marine life education and awareness events in many parts of the country – and more events are planned throughout the year.

Photos courtesy of the U.S. Fish and Wildlife Service.