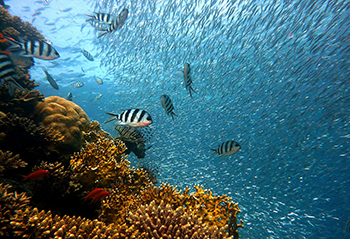 Biodiversity is the degree of variation of life forms. This variation can be within a species, an ecosystem, a biome or even a planet. Biodiversity is also a function of climate. Warmer terrestrial climates, like tropical rain-forests, are typically rich in biodiversity, while colder climates or polar regions support a much smaller variety of life.

Usually three levels of biodiversity are discussed—genetic, species, and ecosystem.

At the smallest scale, genetic diversity within a species is a measurement of all the different variations in traits within a species. Having a variety of genes protects a species from environmental changes, diseases, and other threats.

Species diversity describes the variety of all the differences within and between populations of species, as well as between different species.

At the largest scale, ecological diversity describes the complexity and abundance of life in an entire ecosystem or biome. Ecosystem diversity is all the different habitats, biological communities, and ecological processes as well as variation within individual ecosystems.

Biodiversity is often used to measure the health of an ecosystem. Healthy ecosystems are biodiverse ecosystems. Each organism in the ecosystem has a specific role, a place in the food chain and a function in the environment. 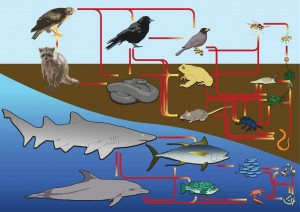 An ecologically diverse ecosystem is more resilient. It can endure and recover from disasters (such as wildfires or climate changes). When the population isn’t very diverse, the ecosystem loses this flexibility and the whole system can collapse.

Why is biodiversity important?

We are also part of the ecosystem. We depend on the organisms in our environments for many things and are directly affected by decreasing biodiversity. Humans have always depended on the Earth’s biodiversity for food, shelter, and health.

“It is reckless to suppose that biodiversity can be diminished indefinitely without threatening humanity itself.” — E. O. Wilson

Biodiversity has provided a wealth of plants and animals and allowed us to hunt, fish, gather, and grow food in almost every region of the world. Wool, cotton and fur have clothed us, and many different plants have provided materials to create shelters with.

Our environments have given us a wealth of medicinal resources, from plants used in traditional medecine to naturally occurring compounds and extracts used in by the pharmaceutical industry. As new species become extinct and genetic diversity is lost – so is the potential that research might have been able to develop a new vaccine or drug.

From the wealth and diversity of life scientists have found animals models to help solve human health problems. For example, researchers can study how seals, whales and penguins use oxygen during deep-water dives to find new ways to help people suffering from strokes, shock, or lung disease.

Mankind has become accustomed to many of the ecological services supplied by biodiverse ecosystems. Biodiversity plays a part in regulating the chemistry of our atmosphere, soil and water supply. These are the things that make life livable on Earth.

Any loss of a population of animals or a species or a group of species from an ecosystem can unbalance that system and disrupt the ecological services we depend on. For example, the loss of biodiversity in honeybee populations and other pollinating insects has been very problematic for farmers in recent years.

Estimates vary, but scientists think there are between 3 – 30 million species on Earth (a few studies predict that there may be over 100 million species). But scientists have only identified approximately 1.7 million species of living creatures to date. Currently species are becoming extinct at the fastest rate known in geological history and most of these extinctions have been tied to human activity.

Since life emerged on Earth there have been five major mass extinctions and several minor events causing large and sudden drops in biodiversity. Since the emergence of humans, there has been an ongoing reduction in biodiversity. Now we are on the verge of a sixth great extinction. Scientists have calculated that three-quarters of today’s animal species could vanish in just 300 years. So as we move forward into 2013, the global loss of biodiversity continues to be an important issue.

Fortunately, it’s not all bad news. Researchers say that the good news is if we take action now by protecting endangered and threatened species and their habitats – this mass extinction can be prevented or at least delayed by thousands of years.

A great infographic on biodiversity created by The World Bank

Photo courtesy of LadyofHats (Own work) [CC0], via Wikimedia Commons