Chief Salaton Ole Ntutu lives in Kenya, where he runs a tourist camp and cultural center. Last year, Salaton visited the United States for a month to fundraise and raise awareness about his camp. During this time, Sarah Abdelrahim took the opportunity to have a Skype video discussion with him about the camp and his traditional Maasai views about nature.

Chief Salaton Ole Ntutu is a Maasai community leader and elder, former warrior, and an entrepreneur. Growing up in a small, rural community in southern Kenya, Salaton never received formal schooling, and cannot read or write, but he believes in the power and perseverance of his culture. He had the foresight and entrepreneurial skills to start the Maji Moto Maasai Cultural Camp, which sits at the foot of the Loita Hills in southern Kenya.

The Maji Moto Maasai Cultural Camp provides visitors with the opportunity to encounter some of Kenya’s diverse wildlife while simultaneously learning about Maasai culture. Visitors stay in an actual Maasai community, rather than in a commercially-built camp, and they have the chance to experience the intimacy of village life. 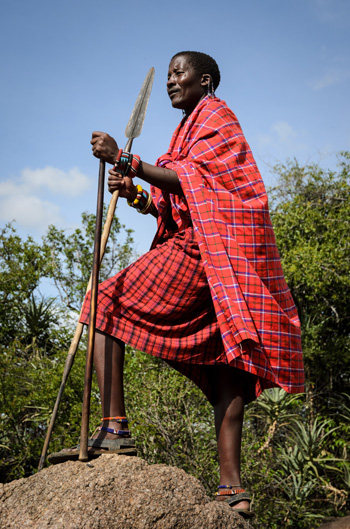 Salaton started the camp more than six years ago to help preserve the Maasai’s traditional way of life. According to him, 80 to 90 percent of the Maasai people in southern Kenya are not formally educated, yet they possess traditional knowledge specific to their way of life and natural surroundings. Knowing this, Salaton decided to find a way in which his cultural traditions could promote tourism and create jobs within his local community while also protecting the disappearing Maasai culture. In our interview, Salaton explained that the younger generations of the Maasai community were increasingly moving to towns and cities to pursue formal education and jobs. But he saw opportunities to create jobs in his community by educating not only tourists about Maasai culture, but Maasai youth as well.

“There are 42 tribes in our country, the country of Kenya,” he explained. “The Maasai people still have a very old and strong culture.” Estimates put the population of this ethnic group at nearly 850,000 in Kenya. Nowadays, government programs encourage the Maasai to abandon their traditional semi-nomadic lifestyle.

The Maji Moto camp grew organically, starting as a campground where tourists could come and set up a tent. Then cottages were gradually added. As tourists kept coming, wanting to learn more about Maasai life, and as the local Maasai became more willing to share their traditions, the camp grew.

The camp serves to educate tourists while simultaneously giving community members the opportunity to come together to share and preserve their own traditional Maasai knowledge. Salaton tries to create awareness in his community about the importance of the land for different species, knowledge that he fears is at risk of being lost. For example, the Loita Hills contain a number of important medicinal plants, he pointed out, and the area provides important corridors for several animal migrations. Salaton noted that there is a need to create harmony between people and their natural surroundings, and between people and the animals that share the same land.

“But, we – I say we as humans – are self-centered; we go and chop the trees to grow more wheat or beans or other foods,” he reflected. “And after we plant all these crops, we use a lot of fertilizers. And it’s not good for the animals or the bees.”

Salaton believes that the Maasai have a unique role to play in preserving the land. For the past several decades, government demarcation of Kenya has gradually partitioned land throughout the country into plots for individual ownership. The Maasai held out, however, insisting on governing their own territory as a community. But the process of privatization has divided up larger tracts of land near Maasai holdings. There, landowners have developed the land, creating farms and building factories. And, according to Salaton, the human population of the Loita Hills area has grown significantly over the years. 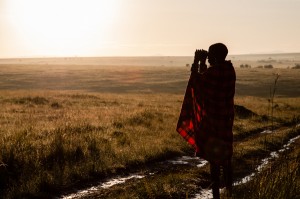 “Before the demarcation, we were living as one small village on one side of the land, and the larger animals were able to go to the other area to graze, so there was no problem,” Salaton said, reminiscing about the formerly healthy relationship between Maasai and the animals with whom they shared the land. “But now that the land has been demarcated, each and every person tries to go claim different sites of the land, so the land is becoming smaller for the wildlife.”

Salaton believes that the Maasai hold some of the only remaining land that is large enough to sustain wildlife as it grazes and reproduces. The animals, he says, have nowhere else to go. He believes that, because the Maasai are native to the land, it is up to local community leaders to lead conservation efforts and establish a dialogue with the Kenyan Wildlife Service to ensure that local views about nature are taken into account.

According to Salaton, the Loita Hills region is central to the Maasai community and its livelihood. The land is home to many plants and wildlife, and also hosts the herds of Maasai cattle and goats, which are important to their traditional way of life. “In our community, because we are not formally educated, rather than use a bank, we use the cow as a walking account,” he says. The size of a man’s herd is an indicator of his wealth, and cattle are used to settle debts and seal contracts.

But these herds are not the only animal with which the Maasai interact on a regular basis. Salaton also talks of encounters with wildlife. “The elephant is one of the animals with a very strong memory. So when the elephant passed a trail 50 years ago, he can still remember, and come back and use the same trail.” Today, those same trails pass through villages and near more modern developments.

Because people now own the land, they have altered it in many ways, by planting crops for example, which elephants raid, and by creating arbitrary borders around properties. People have also been building irrigation systems for farms and gardens, and the water lures elephants onto cultivated land. All these changes have led to an increase in people encountering wildlife, sometimes with deadly results.

“The big issue is people try to occupy the trails and the land ... it is very self-centered.” For Salaton, the loss of the traditional knowledge of animal migrations and herding puts everyone – wild animals and people – in danger. Wildlife isn’t limited to animals, however. The Maasai also respect plants, which play a significant role in their culture. Salaton described the importance of traditional medicinal plants to his own family. His mother was a strong medicine woman, and when she grew older, she started to train other young women and also trained Salaton, her last-born, who is now a respected shaman.

Unfortunately, this traditional knowledge is being lost because most local youth want to leave the villages to pursue modern opportunities. “The younger generation is just looking one way, instead of looking at the broader exchange of learning,” Salaton told me. He tries to address this loss with various programs at Maji Moto. These include encouraging young Maasai to participate in the camp as a way to learn about and preserve old traditions. He believes that he is part of the last generation that was raised close to traditional Maasai culture. “So we are trying to bring the local families and young people together to understand and preserve our culture.” 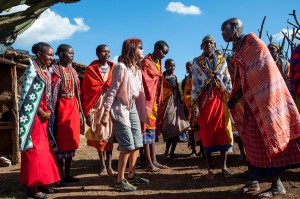 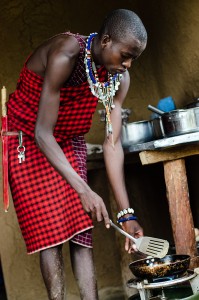 The Maji Moto camp employs an average of 15 people at any given time, but dozens of others, like those who live in the widows’ village, have the opportunity to earn income by selling souvenirs and vegetables, fetching water and firewood for the camp, or doing one of the many other tasks necessary for the camp.

Salaton hopes that the Maasai culture and land can be preserved and hopes that by protecting Maasai traditions, he can empower his community. If he can demonstrate to the community and to the Kenyan government that people can still make a living by preserving traditions and respecting the natural world, he believes he will have succeeded. 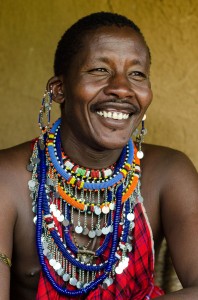 “Right now,” he said, gesturing to his clothing, “I’m dressed in my traditional dress. And you see my beautiful dress. But I don’t want you to see my naked body. In our community, in each and every community, if you see a naked person, you are ashamed of yourself. So we are the children of the world, we need to show respect. The land is older than us. And we give it respect: The land is one of our first elders. Then, after the land, we came into the world. Why are we removing all of the clothes from the land? Why are we not respecting the land? We see human encroachment is huge in the world and we do not have respect for the elder. That’s why we see, everybody – elder and young person – change in the world. Because of people not respecting their land. People try to say we own the land – but nobody owns it.”

All images are copyright protected and may not be used without permission. Photos are courtesy of Michael Benanav

To see more of Micheal Benanav's work, please visit his website at www.michaelbenanav.com, as well as the website of the non-profit Traditional Cultures Project, at www.traditionalculturesproject.org