An excerpt from the cli-fi novel Weather Menders 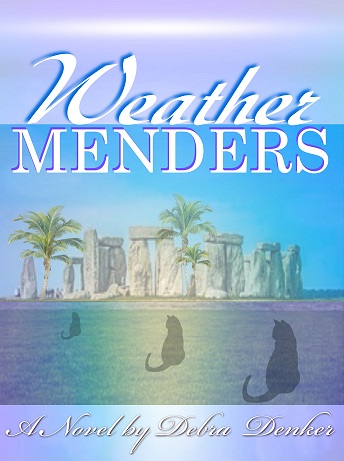 I conceived Weather Menders during a very hot summer visit to the UK in 2013. I had been looking forward to escaping the heat that in recent years has become characteristic of Santa Fe summers by going to Alaska in June and then to the UK in mid-July. The joke was on me, as both places were experiencing unprecedented record-breaking heat.

As I sweltered while walking through Crop Circles near Stonehenge and almost fainted during a water blessing ceremony at the stone circle of Avebury, I started “seeing” flashes of a very old woman leaning her back against the cool black stone of the Cove of the Moon, and heard the voice of her adopted great-granddaughter telling her of the strange silvery human-like figures she has seen at the great Henge. I heard the purr, and then the mind-whispers of a gray cat who would follow the old woman anywhere.

The year is 2050, and the world has been through three pandemics. The pockets of survivors have lost contact with each other, as there is no more internet or other speedy communication except, perhaps, for the Elite in the city. The ordinary people have reorganized into an arguably kinder and more equalitarian society.

Imagine that you are in that decimated world and time travelers from 300 years in the future suddenly arrive with the urgent message that time travel is the only way to reverse the catastrophic climate breakdown and the decrease in atmospheric oxygen that will threaten all life on the planet within 50 years. Where and when would they travel to? Would you join them? Would you let your cat come with you? Could you stop him?

A distinctly dystopian future began to emerge as I wrote the first draft of the novel in 2015, but always in entanglement with the hope of creating an ecotopian alternate history. As I wrote, often tearfully, about the three Great Plagues, the economic crash, the sea level rise and the severe disruption of climatic patterns, I thought I was wildly exaggerating for the sake of fiction, to grab the reader’s attention to a cautionary tale, to entertain, shock, move deeply and even amuse.

But just as Margaret Atwood’s terrifying vision in The Handmaid’s Tale came uncomfortably close to the truth of recent years in the United States, I watched the climate warnings flash and jangle ever more harshly as I wrote.

Here’s a sobering thought: we are closer to 2050, the year in which Weather Menders begins, than to 1990, which was only two years after Dr. James Hansen testified before the US Congress that he could state with 99% certainty that recent temperature rises were the result of human activity.

Absent time travelers and other miracles, we now have (maybe) about nine years to consciously co-create the most rapid and radical transformation in history, one that must touch on all areas of human society. The climate emergency and the biodiversity loss crisis are intertwined like twin demons that must be transmuted and vanquished. We live daily with a sense of urgency — and a wild hope.

As always when she first awakened, Tara wondered why she was still alive, and at age 96, even healthy and fit.

That would be her step-great-granddaughter, Leona.

Tara stretched, pulled her long, white hair away from her sweaty neck, and attempted to curl back up into the relatively cool shade of the great standing stone against which she had fallen asleep.

Tara yawned a wide yawn at the same time as the sleek gray cat curled up at her feet yawned. She laughed and petted Georgie.

“Thank you. Did you sleep well?” Soft words formed in her mind. She looked at the cat’s intense green eyes and blanked out what she thought she had heard. At her age…

Leona ran towards her excitedly, splashing through a rice paddy, her wild, dark, kinky hair spread out around her like a raven’s wings. She was out of breath by the time she reached Tara.

“Careful,” admonished Tara. “You’ll get heat stroke running like that.”

“I’m used to it. Remember I was born a lot later than you, Gran.”

“Right, right, so your body is adapted to the heat, etcetera. What’s all this tamasha about?”

The girl’s hazel eyes glittered in her dark-skinned face, reminding Tara of the cat.

Leona settled down beside the old woman, seeking out the shade of the ancient dark stone.

“Where are you coming from?” Tara asked.

“In one day?” Tara marveled at the girl’s energy. It was nearly 40 miles away.

“Most of it was on the canals. I didn’t run all the way.”

That’s right. Tara still forgot about how many new canals had been dug as the waters had risen, extending the 18th century network as much of the West Country progressively turned into marshland, making foot roads impassable.

Tara sat up abruptly. “Leona, have you been…”

“No, Gran, no drugs, no moonshine. At least not recently.”

“You’re sure you’re not dreaming? Even as a child…”

“I haven’t been able to talk to them. But they see me, and I see them.”

“None of the others can see them. Well, I think Janus does sometimes, from the way he looks, but he hasn’t said anything.”

“I have seen them…” Again, soft words in her head. She shook her head to clear it and looked at the cat. Georgie was staring at her intently. “Cats do.”

She scratched the cat’s ears, assuming that her hearing a cat speak was a sign of impending dementia. She was a little surprised, and grateful, that she had avoided it this long. Perhaps she was not too long for this world. Leona was almost grown…

“Have you seen them before?” Tara asked the girl.

“Always at the Henge?”

Leona nodded her head. “Always. Up till now.”

“What’s…” Tara stopped, squinting towards the whitish sun just dipping behind the horizon in the west. Georgie the cat froze, looking intently in the same direction. Three silvery figures advanced towards them, through the rice paddies, just as the dinner gong sounded from the Longhouse in the distance.

“Can you see them?” Leona whispered.

“I see something,” Tara said uncertainly. “Just humans. But…Maybe they came all the way from the City.”

As the figures advanced, she had time to observe them. She had the keen sense that they were observing her as well. She glanced down at Georgie. He was tense, expectant, but did not put his back up or hiss.

Clearly human. A little misty around the edges, but that could just be the late afternoon mists of what used to be autumn. Two men and a woman. Not quite space suits, more like the jumpsuits worn in Star Trek and other sci-fi films of her youth. Maybe that was the fashion in the City now. It was so rare that anyone came out into the depopulated countryside that she didn’t know.

The three stopped about fifty paces away. Their whitish garments glowed slightly in the gloaming.

Leona crouched by Tara’s side, like the long-extinct lioness that was her namesake, her eyes focused, staring the figures down.

“They followed me here,” whispered Leona. Tara could feel her great-granddaughter shaking next to her. She wasn’t sure if she herself was shaking as well.

“Welcome,” Tara called out uncertainly. Her voice was surprisingly strong.

“Thank you.” A human voice, male, deep. Not just a vibration or a thought in the mind.

“Do you come from the City? You are welcome to join us for dinner in the Longhouse. We don’t have much variety, tuna, rice, a little greens…”

The man shook his head quickly. “No time now. You can see us? Both of you?”

“And the cat,” purred the soft words in Tara’s head.

“And the cat,” said the man. The other man and the slim woman remained silent.

“Yes,” said Tara. She started to reach out towards the man’s hand, to touch. The party of three backed off a few paces.

Tara blinked. Leona and the cat stared at the place where the three had been. Lightning flashed purple-white and Tara could see footprints in the mud, which were quickly obliterated in the deluge that followed.

Georgie jumped onto Tara’s shoulder and tucked himself beneath the oblong woven reed umbrella that she put over her head. Leona unfurled her own umbrella from her knapsack and the two humans and one gray cat slithered and slipped their way to the Longhouse.

As they entered the pool of fish oil light, Tara looked meaningfully at Leona.

“I know,” said Leona impatiently. “They’d think we were crazy. I haven’t even said anything to Janus.”

Tara hesitated, the rain sluicing off her umbrella. “How often have you seen them?”

“This is the first time they’ve followed me,” said Leona evasively.

Tara stepped under the thatched porch and shook off her umbrella. She thought she’d seen everything in her 96 years—wars, revolutions, terrorist attacks, the climate breakdown, the three Great Plagues. She’d seen Crop Circles in the old days when barley and wheat grew in these very fields, and she’d seen UFO’s fairly routinely in her travels throughout the world as an anthropologist working on environmental restoration with indigenous peoples from southern Africa to Tibet to Taos Pueblo, where her maternal grandmother’s ancestors came from. But she’d never actually spoken with Star Beings or inter-dimensional beings.

Her heart stirred with hope. Had they finally come to help, at this late date? Were the Prophecies that she had long ago dismissed as myths about to be fulfilled after all?