Atrazine, a continued concern for all

Research published earlier this year, detailing the effects of the popular herbicide atrazine on amphibians, reignited ongoing controversy over using chemicals to control our environment. 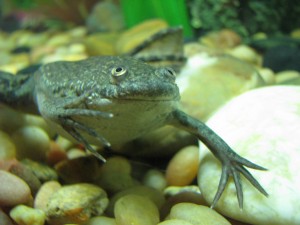 Various scientific studies have shown that frogs that come in contact with the herbicide are often born hermaphroditic, which threatens frog populations and brings up further questions about the safety of the herbicide for humans. According to a study at the University of California, Berkley, roughly 75 percent of male African clawed frogs exposed to atrazine were unable to reproduce because they lacked testosterone. Without testosterone, these frogs could not make sperm and had zero chance of successful reproduction.

Aside from the issues of endangering dwindling frog and amphibian populations, and negatively impacting ecosystems in the United States – questions pertaining to the herbicide’s safety in general continue to be brought to the table.

Research has linked atrazine exposure to immunosuppression in frogs, reproductive defects in fish, and prostate and breast cancers in rodents.  Some epidemiological studies suggest atrazine could potentially be carcinogenic in humans. Furthermore, once atrazine is introduced to an environment, it is difficult to get rid of. Atrazine remains in the environment at detectable levels for more than a decade. Even if the herbicide were to be banned today, its negative effects could be felt for years to come.

Unfortunately, atrazine is one of the world’s most popular herbicides, and it is commonly found in water sources throughout the United States. Around 80 million pounds of this herbicide is applied annually to agricultural products in the United States. Today’s controversy stems from the Environmental Protection Agency’s (EPA) recent decision to discuss banning the herbicide. 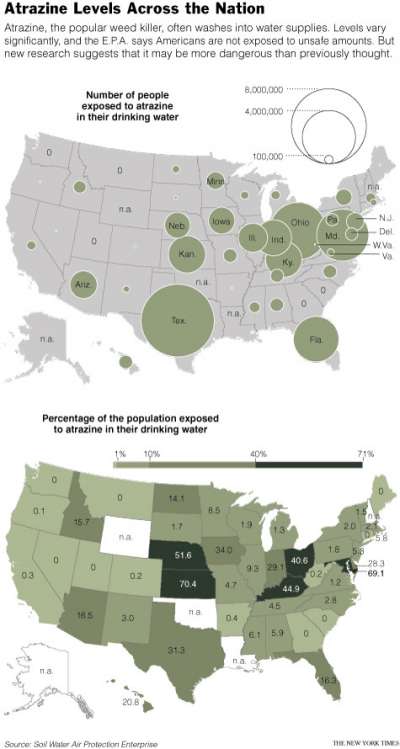 Graphic via NYT: Debating How Much Weed Killer Is Safe in Your Water Glass
By Charles Duhigg
Published: August 22, 2009

Atrazine is produced by Syngenta, a Swiss agrochemical corporation, and it has been banned in the European Union since 2005. The EPA has tried to ban atrazine in the past but according to activists, Syngenta inundated the EPA with lobbyists and held private meetings to thwart any efforts to ban the product. The company also has a reputation for conducting smear campaigns against scientists that refute their products in addition to their fierce lobbying techniques.

Fortunately, there have been diligent efforts made by activists to disseminate information about atrazine’s detrimental effects. “Save the Frogs,” one of the most prominent groups, is currently holding various rallies in support of the possible ban, as well as providing information for sympathizers and drawing up a petition for submission to the EPA.

To support the cause or for more information, visit Save The Frogs