For hundreds of years, the Navajo and Hopi thrived in the high, arid deserts of Arizona. Throughout recent history, these people have faced numerous assaults on their ways of life: war, forced relocation, Mormon and other religious evangelism, and the discovery of natural resources on their traditional lands, now coveted by the U.S. government and private corporations. 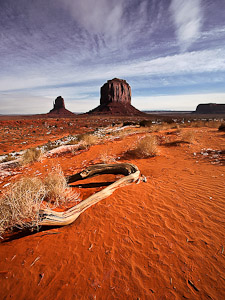 The Department of the Interior established nineteen grazing districts allocated to Navajo or Hopi based on population in the areas. Only District 6 was defined exclusively for Hopi use; some of the others were for Navajo, and others were Joint Use Areas. In April 1943, District 6 was enlarged by 631,000 acres, and the Navajo homesteading the land were ordered to leave. Those who stayed saw the mass slaughter of their animals, under the guise of reducing overgrazing.

These brutal acts were about more than agricultural policy; they represented the loss of the traditional livelihood of the Navajo and an assault on their culture. This kind of violation illustrates the huge gulf between the "good intentions" of legislators and the truth of what is experienced as a result. For the Navajo, this was one more example of a government that ignored their human rights at best, or at worst, was complicit in exterminating their way of life.

Some Navajo went to outside sources for help. After Congress passed the Indian Claims Commission Act in 1948, authorizing the tribes to hire legal counsel to sort out the land rights and seek compensation for losses, a lawyer from Salt Lake City approached the Navajo to become their claims attorney. When they rejected John Boyden, the Hopi hired him. Boyden, who was also a Mormon preacher, was dapper, chubby and tended toward flights of oratory. The lawyer for the Navajo, John Littell, was direct and assertive. Square-jawed, with wide, penetrating eyes and a furrowed brow, he had just been fired from his position as Assistant Attorney General by President Roosevelt. The charge was insubordination. Littell had made a reputation for himself by denouncing government-assisted monopolies, special favors to big business and the corruption of his own boss, the Attorney General.

These two men played a huge role in the dissection – and sale – of the Navajo and Hopi reservations. After the tumultuous years of negotiations, legal battles, Congressional resolutions and unrelenting oppression of the people living on the partitioned lands, it was revealed that Boyden represented Peabody Coal as a client at the same time he was negotiating the mineral leases for the Hopi. And Littell, although he was eventually fired again, had inserted into his contract a clause awarding himself 10 percent of the Navajo coal leasing claims. Neither had the best interests of the tribes in mind.

One afternoon, I hiked along the eastern edge of the canyon, the wind cold as it flaunted the afternoon sun. About a mile and a half from Annie Begay's, another elder, I found myself nearing her neighbor's homestead, consisting of a small, wood-frame house, corrals of livestock and two fat puppies waddling to greet me. I called "Ya-a'tay" to a man who emerged from a hogan dug right into the side of a cliff. Leo, he said his name was as we shook hands. His nose was broken, face rubbled with bones shifting like rocks under sand. Opening the door to his hogan, he invited me in to meet his mother, a hearty over-one-hundred elder who had walked down from the house on this cold day to see how her son was doing. It was hot inside the tiny space. Leo lifted something from a wooden box. Coal, he told me – a piece the size and shape of a black skull with a dark radiance that would heat all day.

Strip-mining on Black Mesa began in 1969 when Peabody broke ground at two mines on those forty thousand acres of the Joint Use Area and twenty-five thousand acres of Navajo Reservation. The pro-mining faction of the Navajo Tribal Council had won, even though the elders warned that it was a violation of the Earth. The Navajo believe that coal is the liver of this living being, water is her lungs. To move the tons of excavated mineral to the newly-constructed Mohave Generating Plant in southern Nevada, Peabody built a 273-mile long slurry line through the reservations. Over the thirty-five years of its operation, the slurry line sucked hundreds of thousands of acre-feet of water from the subsurface Navajo Aquifer. Contamination from 250 waste ponds surrounding the mines leaked toxic metals and arsenic into the groundwater, poisoning livestock and causing health problems for the people who depended on it. The incidence of acute asthma spiked from particle pollutants siphoning uncontrolled into the atmosphere. Worst of all, the natural springs throughout the Hopi and Navajo reservations were drying up, their only fresh water source in the high desert lands. Peabody steadfastly denied that the billions of gallons of water they used had anything to do with this, blaming the shortage on drought and climate change.

The negotiated sharing of revenues felt inadequate to both tribes and their lawyers, and in 1971, there was a renewed push for the actual partition of the Joint Use Area. Congress, with the help of John Boyden, introduced a bill to divide the property and remove all Navajo and Hopi living on the wrong sides of the line. It also transferred more than 140 thousand acres with all grazing and mineral rights from the Navajo Reservation to the Hopi. The land to be given to the Hopi was the farthest from their home mesas, which include most of Black Mesa.

The early 1970s were explosive with civil rights issues and anti-war sentiments, and the bill lingered for three years before it was passed. To ramp up the controversy, Boyden argued before the House Subcommittee on Indian Affairs that Navajo intrusions threatened the Hopi with their "systematic elimination as a people." He had the Hopi Tribal Council hire a Salt Lake City public relations firm to stage-manage the set of a contrived range war. The PR firm created a distorted picture of Hopi living in fear of Navajo rampant violence, leading TV crews and journalists to shot-up water tanks and burnt corrals. LIFE magazine ran a cover story; Time magazine, a full-length spread. In 1974, Congress passed Public Law 93-531, the Navajo-Hopi Land Settlement Act, authorizing the final partition of the Joint Use Area.

Boyden had told Congress the move would affect 3,500 Navajo; in fact, there were thirteen thousand Navajo and one hundred Hopi that would need relocation. The Relocation Commission, an adjunct power of the BIA, was set up to handle the logistics. The tenants of these lands were offered financial incentives to move. Five thousand dollars and replacement housing would be given to each family that voluntarily relocated in the first year. The amount would decrease by one thousand dollars annually for five years. By 1986, any family remaining would be forcibly ejected. The bill allowed the Hopi to impound up to 90 percent of Navajo livestock, which would devastate their traditional economy and culture. It authorized the Department of the Interior to sell to the Navajo tribe up to 250 thousand acres of BLM land at fair market value to replace the 911,000 acres they would lose at partition.

Very few Navajo living on what was now called the Hopi Partition Land (HPL) jumped at this opportunity. Katherine Smith had summed up their feeling in testimony at a Senate hearing in 1972. She said:

I will never leave the land, this sacred place. The land is part of me, and I one day will be part of the land. I could never leave. My people are here and have been here forever. My sheep are here. All that has meaning is here. I live here and will die here. That is the way it is, and the way it must be. Otherwise the people will die, the sheep will die, the land will die. There would be no meaning to life if that happened.

To help coerce the Navajo to leave the HPL, the Relocation Committee hired crews to put up fences, block access to sacred sites, and harass and disrupt the community. Gathering firewood was prohibited and a building moratorium was instituted, making new construction and any repairs on existing homes or corrals illegal. If new construction was found, it would be bulldozed and destroyed. However, when the crews started arriving on Big Mountain, they encountered stubbornly courageous Navajo elders knocking down fences, throwing dirt in their faces and pointing .22-caliber rifles.