Bobcats in the Hood 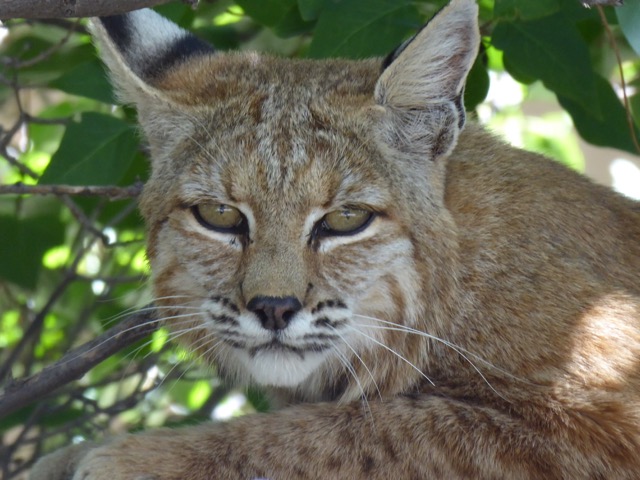 As I open my garden gate on an uncharacteristically sultry Southwest summer afternoon, I hear a growl, a thump and then scrabbling in the Russian olive tree above me. I round the corner and come face to face with a very annoyed looking bobcat mom. She growls once more, looking up at the branches to where her two kittens are peering down curiously.

I back off, speaking softly to her. I apologize to her in my language, sorry that I have startled her afternoon rest with her kittens. I ask her if she minds if I go get my camera. She relaxes and takes a few wary steps back.

I suspect the clowder of bobcats, as a group is known, will surely be gone by the time I find the closest camera. But a few minutes later, as I walk out into the wild brush land behind my home, I hear another growl and turn to see her about 30 feet away, lounging on my adobe wall in the afternoon heat, for all the world like one of my indoor cats on the back of a sofa. 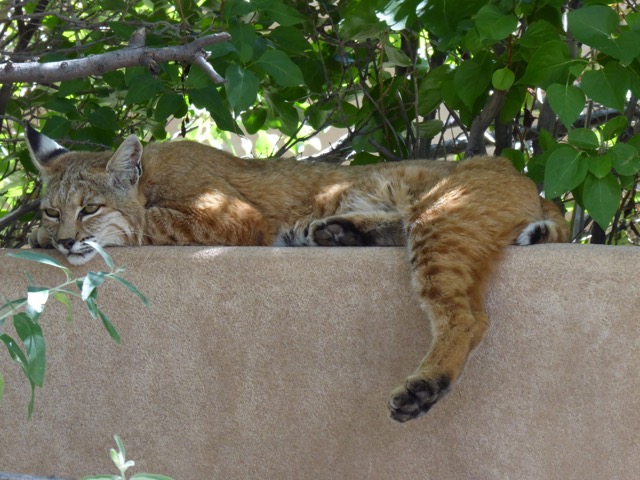 After the growl, she yawns, looking at me as I snap a couple of pictures from a respectful distance with a good zoom, and then promptly goes to sleep. One of her kittens is still in the tree, and she is aware enough to growl slightly as I point the camera upward, but then she puts her head down once more, apparently satisfied that I am no threat.

I am immensely grateful for this close encounter with one of the wild creatures who share their habitat with me, the encroaching human. I post the pictures on my neighborhood website, and for a few moments the contentiousness around issues from recycled road-paving to the use of Roundup on our trails evaporates, and everyone waxes rapturous about the beauty in which we live.

Like many in the US and other countries, I live on the edge of the human-wild interface, in a semi-rural subdivision outside Santa Fe, New Mexico. We share the land — or should I say the land is shared with us? — with a wide variety of species in this rolling pinon-juniper woodland at an elevation of about 7,000 feet. We live next to, and hopefully in harmony with, not only bobcats but coyotes, pronghorn antelope, cute but sometimes destructive pack rats (desert woodrats), and a variety of rodents, snakes, and birds ranging from diminutive hummingbirds and finches to quail to several species of hawks. There is even an occasional sighting of a mountain lion or black bear, individuals down from the mountains sitting only a few miles away.

I’ve lived here since the mid-90s and had never seen a bobcat up close in person (despite the nearby restaurant called the Bobcat Bite) until last year. On the Fourth of July, 2016, several guests and I were rewarded with a magical experience in my backyard. Beyond the garden wall, I caught a flash of movement and ruddy fur in the thick juniper grove. As we tiptoed to the wall, a bobcat mom strolled out of the copse and sat nonchalantly on the concrete slab covering my water cistern, grooming and flicking her ears to better show the distinctive black-outlined white triangles on the back. She yawned in the afternoon heat as she watched the five human heads on the wall watching her and whispering about her beauty.  When she strolled away, she was followed by three scampering, playful kittens.

That initial interchange occasioned some research on my part. I wanted to know all about bobcats (lynx rufus) and their habits. I learned that I am lucky to see them at all, especially in broad daylight, as they are crepuscular, meaning they are active and hunting in the hours around sunset and dawn.

After a few more sightings during summer and autumn months, I figure out that Bella (as I name her) must have a main den somewhere closeby, and that it’s almost certainly the same female queen bobcat I am seeing over and over, since bobcats are territorial. Respecting her wildness, I don’t look too closely in the greenbelt for the den. I suspect that in between hunts for cottontail rabbits, pack rats and mice, she and the kittens shelter in auxiliary dens in the rocks and branches of deadfall beneath my juniper trees. I notice that the population of pack rats seems a lot more in balance since the bobcats have appeared in the hood.

Bobcats are fascinating. They can “wear” their characteristic cheek ruffs puffy or “slicked back, depending on their mood,” according to some of the websites I visit. Their spotted coats enable them to blend in splendidly with their surroundings. They are named for their short, “bobbed” tails, which distinguish them from their much larger big cat cousins, mountain lions or cougars. They can jump 12 feet, which explains how they get up onto people’s roofs, often leaving their kittens there, safe from ground predators, while they go hunting.

Many of my neighbors have been startled by scrabbling sounds on the roof, only to come out and see a clowder of bobcats. Some people are frightened, for themselves or small pets, but bobcat attacks on humans are extremely rare.

Humans, on the other hand, are vicious predators to bobcats. The New Mexico Department of Game and Fish lists bobcats as “protected fur bearers.” The “protected” part seems to refer only to the fact that they can’t be hunted and trapped out of “open” season. Many states, including neighboring Arizona and Colorado, have banned body-crushing traps since the mid-90s, but New Mexico still allows their use, resulting in horrific deaths for bobcats, as well as deaths and injuries to other wildlife and pets. Attempts in the state legislature to enact humane legislation have so far failed, and in July 2011, Game and Fish ignored 12,000 public comments opposing trapping and instead allowed unlimited trapping for a $20 license fee. A coalition of groups under the name TrapFree New Mexico is actively working to ban trapping on public land.

I’m thankful that our development is on private and thus protected land. The bobcats are a sign of relatively healthy biodiversity in our neck of the woods. Without them, pack rats tend to overrun the area, invading people’s sheds and cars, chewing wires and causing very expensive damage. I and others on the neighborhood website do our best to educate people that the use of rodenticides can sicken and kill the very predators, such as bobcats, coyotes and owls, that can naturally control the rodent population. In California, studies show that bobcats in suburban areas are developing a form of mange, which is often fatal, due to their immune systems being weakened by exposure to rodenticides.

Many people throughout our neighborhood have bobcat neighbors, and most seem happy about it. I’m glad mine trust me, but I want them to remain wild for their own safety, so I always keep my distance. Not all humans are to be trusted.

I reflect on what might attract the bobcats to my two acres. A small pond and birdbaths on the ground provide water, important during dry spells, as attested to by my nighttime critter cam photos of bobcats and coyotes. Another factor might be that I don’t mow the native grasses on my land, except for a 30-foot zone around the house to help protect against wildfire. After over two decades in the area, I have yet to understand why some people mow their entire property, depriving wildlife of cover, decreasing biodiversity and causing loss of contiguous habitat. Some have mentioned fire safety (though mowing everything seems extreme to me) and others say they wish to discourage rodents and snakes near their houses.

I, on the other hand, am fine with rodents as long as they are not in my house, ceiling or car. I also greatly appreciate the many bull snakes and the beautiful, bright pink red racers (also known as coachwhips) that, along with bobcats and coyotes, help keep the rodent population balanced.

My land remains unmowed, wild and biodiverse — all the better for the local humans, bobcats and other species, whether they are furred, feathered, scaled, winged, burrowing, crawling or slithering.

Photos owned by Debra Denker, and cannot be used or reproduced without permission.

To learn more about bobcats and efforts to protect them, head to: