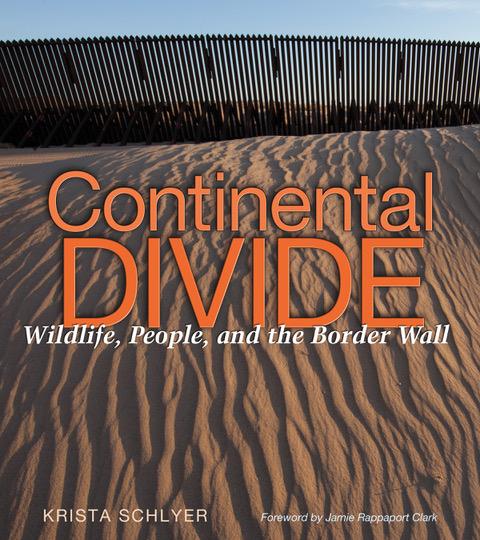 This could be a coffee table book. It’s large, with the dimensions of a three-ring binder. It’s fat, at 292 pages, and it’s full of pictures. But don’t let your dinner guests flip through it — the full-page photos of beautiful sunsets and wildlife are interspersed with images of unnamed gravesites, a desiccated frog and small creatures pathetically seeking a way through the wall, perhaps their only chance at survival.

The divide that Krista Schlyer so elegantly describes is the proposed wall along the US-Mexico border, envisioned to be an impenetrable barrier. The border wall is intended to separate people, but Schlyer’s Continental Divide takes a wider view by documenting the immense biodiversity found along its route. She writes, “…a wall that if it comes to fruition along the entire 2,000-mile border, will divide not only two nations and their people, but an entire continent of creatures…”

Schlyer writes with a reporter’s attention to detail and a writer’s mastery of words that evoke emotion and imagery. Her writings and photographs have appeared in numerous national news and environmental magazines. Continental Divideis the result of five years of documentary work along the border, including an expedition the author led with members of the International League of Conservation Photographers to document the borderlands. It has received numerous awards, including the National Outdoor Book Award.

Schlyer’s work and Continental Dividemade the media outlet rounds.  High Country News reviewed the book and featured Schlyer. She was a presenter at the 2013 Moab Photography Symposium that I attended. The short video clip she showed of a toad throwing itself at the metal barrier over and over still haunts me today. The small creature was trying to return to its breeding grounds to fulfill a biological imperative that evolved over thousands of years.

It doesn’t take long for books to get pushed to a back shelf, as new ones are being published every day. It’s been six years since this book was published, and the author probably never imagined that her statement in the foreword about the news would become even more apt today. “…the complex vibrant character and rich history of the borderlands is obscured by a news media preoccupied with violence and criminality, and a politics of sound bites and insincerity carving wedges from the fears of a nation.”

This spring I happened upon Continental Divide in a book display for Endangered Species Week at the local library. I wonder if the librarian was aware that Continental Divideis as much about human culture, economics and politics as about animals. Schlyer documents the history of human migration and the failed political wrangling over what to do about “illegals.” It highlights the braceroprogram that, for about 20 years, allowed Mexican workers to legally enter and contribute to the US economy. She makes the case that as long as there is poverty in other countries and demand for low-wage labor within the US, the wall will not end the current situation.

Yet this book is also about beauty — of the desert, the grassland and the grand rio that lie along the border. Its 173 color photographs range from vast landscapes to often overlooked lifeforms. My favorite is a portrait of a buffalo with burrs stuck in its tousled hair, part of a small herd that still resides on the Mexico side of the border.

This book could not be more timely. It is needed in the hands of every member of Congress, even more so today than when it was first published. It is available on the author’s website, from the publisher, Texas A&M University Press, and online booksellers like Amazon and Barnes & Noble.