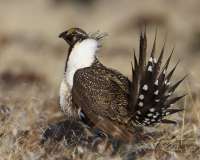 A dramatic decrease in Canada's sage grouse population reported this spring has led many to believe this prairie bird, listed as endangered in Canada since 1998, is facing extinction.

The sage grouse is the largest grouse in North America. This ground-dwelling bird is brownish-grey plumage with white patterning. Males have large black pointed plumes on their tails and a special air-sack on their chest used in mating rituals.

“The Alberta Wilderness Association says only 18 male birds have been counted in Saskatchewan — less than half of the 42 recorded in the last count in 2010,” reported CBC news.Sage grouse numbers in Alberta and Saskatchewan, provinces that were once abundant with this species of grouse, were counted at an all time low this year. Scientists estimate that less than 100 of these prairie birds remain in Canada. 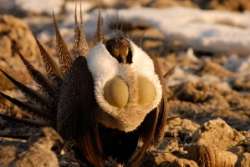 The birds are counted during their spring mating season on sage grouse breeding grounds known as “leks”. Leks, or sage grouse mating grounds, are found in fields, meadows, roadsides and other open areas with sparse sagebrush. Here, male sage grouse performa an elaboratemating dance to attract females to mate with, and eventually who will nest and lay their eggs. The male grouse puffs up the air sacks on hischest and spreadshispointed tail to make himself look larger and stronger to impress the females.

After the males dance, the females select the male with the most attractive dance. The dominant male usually dances in the center of the other males and females and mates with 80 percent of present females. After mating, the females can choose to leave the lek to nest, or use the lek as a nesting ground.

The sage grouse, as its name suggests, relies heavily on sagebrush. Sagebrush canopies shield nests and chicks from predators and the elements. But, for the sage grouse,  sagebrush not only camouflages and protects their nests – it also serves as their primary food source. In one Montana study, researchers found that 62 percent of the sage grouse diet year round is composed of sagebrush. During the winter months, it was the only thing the grouse ate. 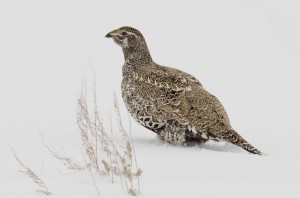 Development, in the form of drilling for oil and gas reserves, building roads, and spraying herbicides can alter or destroy sagebrush and is the biggest contributor to the decline in the sage grouse population.

These vanishing habitats are home to many other prairie animals throughout Canada and the U.S, .such as spotted owls, pronghorn antelope, pygmy rabbit and the pocket gopher, just to name a few.

Preservation of the sage grouse requires immediate action.  If sagebrush habitats continue to disappear and be destroyed, it may not be long until the sage grouse has its last dance.

CBC News: Sage grouse could soon be extinct in Canada

To donate to the effort to save the sage grouse visit: Voice for the Wild – Sage Grouse Protection