“When I started fishing on this coast, there was one hotel. Now, the whole coast is developed and the fish have moved away.” – Georgie Draboucan, artisanal fisher

Small island developing states around the world are the first to suffer the consequences of climate change, rapid population growth and unsustainable economic pressures. These problems can negatively affect one of the islanders’ most precious natural resources: the ocean. Solutions at a local level are vital to ensuring surrounding seas are not depleted of fish and other lifeforms within the next generation.

In places like Mauritius, there are positive signs that locals are willing to band together to protect the ocean. A small island in the Indian Ocean, Mauritius is home to 1.3 million people. After a failed attempt by the Dutch, the French successfully colonized the island in the early 18th century, setting up sugar, indigo, cotton and tobacco plantations. Sugar remained the main export through the 20th century, and sugarcane fields still cover about 40 percent of the island’s surface today. 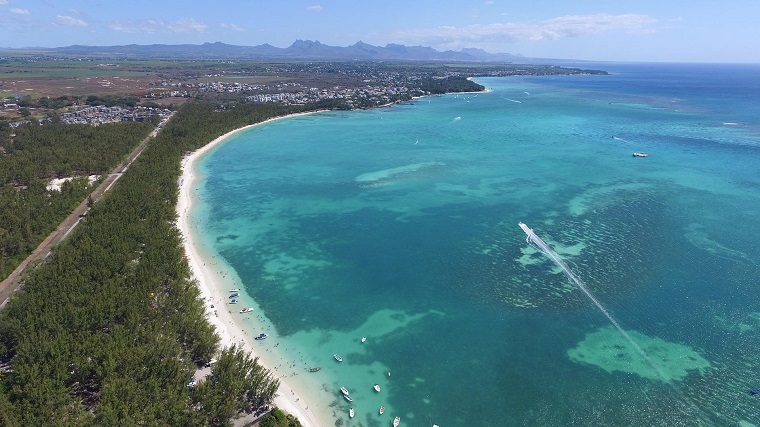 Starting in the second half of the 20th century, Mauritius diversified its economy by launching textile and clothing industries, and opened up trade with the rest of the world. The island started attracting tourists and building luxury hotels along the coast. Today, more than a million tourists visit every year.

Fishing has always been a major part of the island’s economy. While Mauritius is smaller than Rhode Island, its Exclusive Economic Zone is nearly three times the size of Texas and crucial to the economy. The island is surrounded by fringing coral reefs, which create calm and shallow lagoons, and protect the island from natural disasters. The reefs are home to over 1,000 fish species and provide a workplace for about 2,300 artisanal fishermen and women.

In a balanced reef ecosystem, the reef species and the thriving corals are interdependent. With an island population that more than doubled in 60 years, Mauritius has developed rapidly and unsustainably. Pollution and overfishing on reefs and in lagoons, in combination with global warming events, are putting these ecosystems under extreme pressure. Unfortunately, over 50 percent of corals in Mauritian lagoons are dead, and fish as well as octopus populations have decreased dramatically. 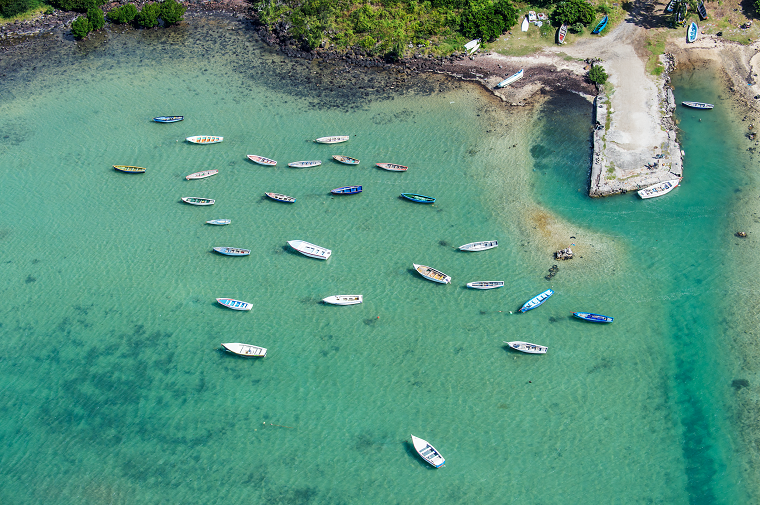 The people who are most directly impacted by the degradation of reefs and lagoons are the small-scale artisanal fishers. Fishing is a family tradition for many coastal families and has been their primary source of income for generations. Some fishers have extended their permits to fish outside the lagoons, but many families still rely on the zone between the fringing reefs and the coast for their living.

One of those artisanal fishers is Georgie. He comes from a long line of fishers and learned the practice from his father, who raised 11 children. In an interview, he shared:

“When I started fishing with my father, there were a lot of fish and octopus. From the money I made fishing, I got married and sent my kids to school. But now, it’s tough for us to make a living. We need to take on several jobs. The fishing profession is disappearing.”

Georgie has seen the decline in fish populations within his lifetime, but will not give up on the occupation he’s so passionate about. If recent positive developments in fisheries management continue, he may not have to.

At the end of 2014, residents of Mauritius elected a new government. The Ministry of Fisheries was renamed the Ministry of Ocean Economy, Marine Resources, Fisheries, Shipping and Outer Islands, thus acknowledging the economic importance of marine resources. One of the first ocean conservation initiatives under the new government was inspired by a success story in Rodrigues, Mauritius’ autonomous sister island.

Around 41,000 people live on Rodrigues, and the main economic activities are subsistence fishing and farming. Most fishers depend solely on octopus, but stocks were getting depleted as a result of overfishing. In 2012, the regional government of Rodrigues led the first seasonal closure of octopus fishing. The two-month closure was done in partnership with SmartFish, a program of the Indian Ocean Commission. 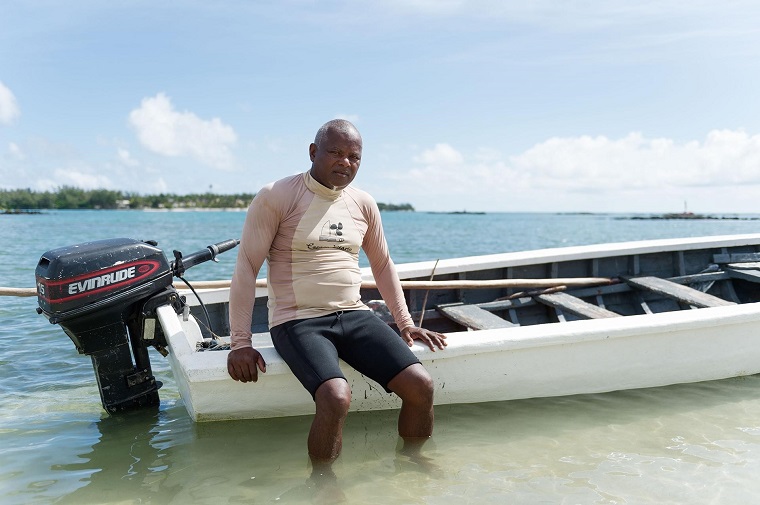 The octopus has a rapid life cycle (18 months on average) and can double its weight in only two months. A female octopus lays hundreds of thousands of eggs and dies about a month afterwards. The seasonal two-month closure of octopus fishing not only allows for exponential individual growth, but also for enough females to lay eggs for the overall population to recover. Following the first temporary closure in Rodrigues in 2012, annual catches for octopus were almost back to their 2003 levels. After 15 years of decline, that was a significant change.

In 2015, Mauritius’s minister of Ocean Economy, Marine Resources, Fisheries, Shipping and Outer Islands set up a pilot project in the south part of the country in partnership with SmartFish, local NGOs and UNDP’s GEF Small Grant Programme. The country’s southern coast is still rural and not as densely populated as other regions. Most of its inhabitants are fishers or planters, so it provided an ideal small-scale case study for the initiative. 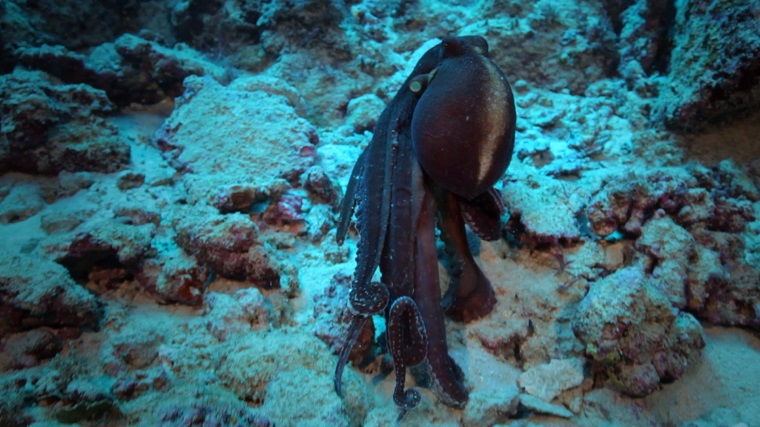 From August to October 2015, in sync with Rodrigues, Mauritius enacted a voluntary octopus fishing closure along the southern coast. Fishers were reluctant at first, but, thanks to the hard on-the-ground work of NGOs, the initiative was a success.

The next step was launching a national seasonal octopus closure in 2016, a difficult task. Mauritius is nearly 20 times bigger than Rodrigues, and therefore more challenging to regulate. Around 2,300 artisanal fishers are officially registered, but any individual can go fishing without the need to declare his or her catch.

To raise awareness around the island, the partners launched a national public information campaign. Posters explaining the octopus life cycle were placed in fishing villages, and locals distributed t-shirts with the closure dates. Radio and TV spots spread the news widely, and NGOs worked with schools and fishing communities. Vey nou Lagon, a 22-minute documentary film, was shown at free outdoor screenings. Discussions after the film engaged fishing families on a personal level. 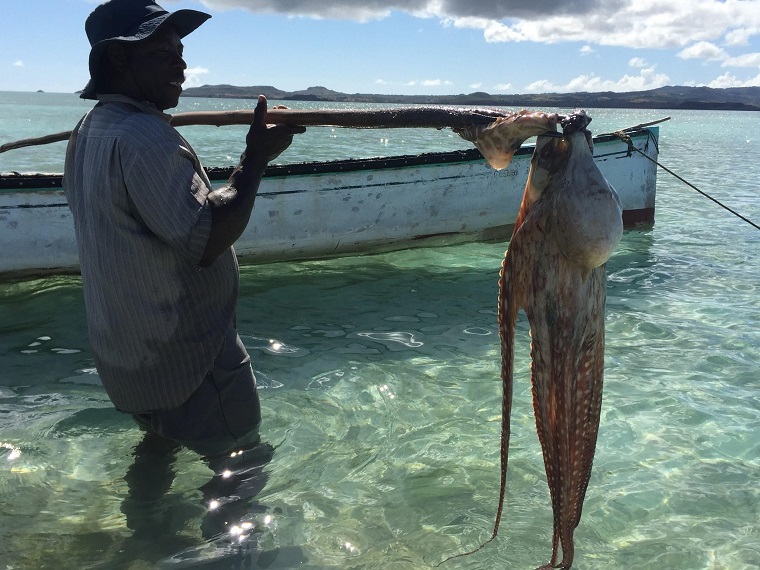 When the fishery reopened after the two-month closure, fishers were amazed by the size of the octopus they caught, nearly double the weight they were used to. One fisher brought in a 20-pound octopus (the record in Rodrigues was 13 pounds). Close monitoring of the fishery is ongoing, and the local government is preparing for the 2017 closure. Some areas reported a lot of illegal fishing, so there is still work to be done, but the first results are definitely encouraging.

This first national initiative sheds light on the importance of sustainable fisheries and mutual respect. Collaboration and solidarity among fishers, locals and tourists are essential. The octopus fishery initiative is an example of a successful effort that can have a crucial positive impact on lagoon ecosystems. Mauritians might also consider establishing marine protected areas to provide nurseries for small fish (and, in turn, lead to bigger catches for fishers outside the zone) and help lagoons regain their once-rich biodiversity.

If Mauritians agree to work together to protect their resources and respect the rules, this can be the start of important conservation measures that will help residents maintain their cherished way of life. As Georgie highlights in his interview:

“If all fishers worked together, we could control our seas. I will fight for the ocean. I love the ocean.”

Mauritius is one of many island developing states that face similar issues. The establishment of sustainable fisheries, with conservation initiatives adapted to the local communities and their way of life, is essential to development — and to our oceans as a whole.