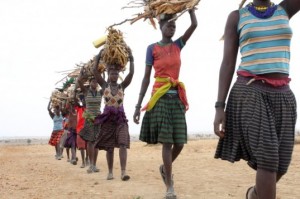 Everyone is affected by global climate change, but some are affected more than others. The poor fare worst of all, and most of the world’s impoverished people are women. According to UNECA, 70% of the world’s 1.3 billion people living in poverty are women.

Why do these women suffer more from climate change?

Climate change contributes to extreme and erratic weather, leading to an increase in droughts, floods, famines and other natural disasters. Women are more affected by extreme weather conditions because they tend to work in the agricultural sector more often than men. Women estimated to make up 50-80 percent of the world’s food producers.

In the developing world, women are often tasked with gathering firewood (for heating and cooking), and fetching water for their families. Decreased rainfall, drought, and deforestation make resources such as firewood and water more scarce. In the dry season, women have to walk farther and frequently spend the majority of their day gathering water.

As women devote more time to gathering firewood and water, their economic activities become marginalized, traditional gender roles are reinforced, and often they are forced to drop out of school. With this, their opportunities for social mobility shrink, and these women sink further into poverty.

Unfortunately, women are often powerless to combat climate change because they are left out of the decision-making process. As of April 2012, no nation in the world had a female majority in their legislative body. In the United States – supposedly a beacon of equality – only 17% of Congress is female. Without a political voice, women have few ways of combating climate change.

As the world warms, if these social trends are allowed to continue, gender inequalities are predicted to increase.

Towards an Environment of (Gender) Balance

Image is Courtesy of Oxfam America. All Rights Reserved.