The decision to pursue conservation biology came after an incredible and intense 14 months of traveling through South America. There was no one moment or epiphany, no strike of clarity, just a slow and steady increase in awareness that I needed to work with the environment. The Andes, the Amazon, the deserts, the salt flats, the coasts, they were all too extraordinary to be mere tourist attractions and certainly too important to be under threat.

When I returned home, I researched different programs and fields and decide to apply to a master’s degree in conservation biology, a field focused on the study and protection of biodiversity in all its forms, from the tiny gene to the earth’s massive biospheres. It is a crisis discipline inherently interdisciplinary in character, pulling from the fields of economics, biological sciences, and politics and extending even into subjects such as philosophy, anthropology, education, humanities and the arts (Soule 1985). It is a value-laden, goal-orientated science, with the preservation of biodiversity as its core (Meine et al 2006), claiming humans are stewards of the earth and thus obligated to protect and care for our planet’s inhabitants and biological systems.

The program I enrolled in had three main tracts: science-based, policy-based and education-based. Science was cataloguing and detailing all the problems; it was surveying the earth and distilling the interactions between animals and their ecosystems that were causing biodiversity loss. Of these, habitat fragmentation, invasive species, over exploitation, over population and climate change consistently rate as the most devastating. Policy, in theory, uses this information as basis for efforts in governing our interactions with the environment, for example, by implementing national parks, pollution taxes, and biological trading restrictions. Finally, education efforts focus their energy on how to teach students the science and understanding of the issues we face today.

As I had studied psychology and philosophy as an undergraduate, I decided to take post-baccalaureate courses in evolution, environmental biology and conservation biology to help me apply my knowledge. Perhaps there was an element of being back in an intellectual setting after three years that contributed to my excitement at the time, but I loved the classes I was taking and was eager to start a program. However, when I applied and was accepted to an MA program in New York City, I was overcome by a huge wave of uncertainty. At first, I chalked it up to commitment phobias and being daunted by the work load that lay ahead; but well into the second semester, I was still feeling (perhaps even more strongly) this great uncertainty about what I was doing. 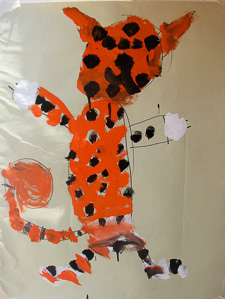 Yes, I loved science and I loved reading and learning about science, but I wasn’t sure I wanted to do science. Equally, I was hesitant toward policy. Although policy-based efforts are exceedingly important in protecting biodiversity and abating its loss, essentially I saw them as forms of activism, away from which I have historically shied.  Finally, the education tract, although perhaps the most appealing to me, was given such little weight within the program that I did not seriously consider it.

It took me a good few months of struggling with this uncertainty before I realized what was truly bothering me. None of the tracts addressed the issues I thought were at the root of today’s environmental challenges. They all seemed to propose Band-Aid solutions to wound with much deeper causes. It seemed evident that no matter how many studies we did and no matter how many parks we created, modern environmental issues would continue to persist so long as we didn’t address what was behind the human behaviors that led to those issues in the first place. Why do humans fragment habitats, spread species, exploit resources and over populate? What perceptions and concepts do we have of the environment that lay at the foundation of our beliefs and behaviors?

Indeed, it was perplexing to me that a program in conservation biology, a field founded on the charge of conserving biodiversity and inherently interdisciplinary in nature, would not have been structured to address these questions.  My program, however, was not special in this regard. Although conservation biology flaunts a multi-disciplinary intersection of the humanities and hard sciences, historically it has actually been dominated by hard science topics such as vertebrates, forests, landscapes, and single species, while showing a distinct dearth in interdisciplinary studies (Fazey et al. 2005).

Initially, I didn’t know exactly what to do. Although my intentions had changed, I had put a lot of time and energy into getting into this program and didn’t feel comfortable dropping out. At the same time, I couldn’t full-heartedly engage with it as it was.

Whilst dragging my feet academically, and perhaps in reaction to the heavily science-based program, I started rediscovering my love of art. I began taking drawing and painting classes and started doing performance art. I took welding courses, began doing carpentry and started assisting a sculptor in Brooklyn. I even turned my apartment into a gallery filled with the work of friends and other artists and opened it to the public for a month. Very quickly I began living almost two separate lives: a very academic and insular one and a very hands-on and extroverted one. These two aspects, in theory, could have worked to balance each other; however, they made me feel even more torn.  I had one foot in the door of science and the other in the door of art, one pushing me to ignore my feelings and the other listening only to my feelings. Indeed, far from feeling balanced, I felt of two minds. It was a very tumultuous and difficult period, and I struggled with these seemingly opposing interests for some time.

Not until a year into my program did I realized the only way I could move forward and still remain engaged in my degree (and not loose my mind!) was by combining the two. I was lucky enough to have an advisor who genuinely understood and felt my struggle and who was open enough to allow me the academic space and support to pursue this intersection fully.

My interest in art’s role in conservation biology stemmed from my initial issues with the programs composition: Although the discipline of conservation biology claims to be an interdisciplinary field, it is mainly based within the hard sciences. So many of the problems we face today, however, are caused by our day-to-day interactions, which in turn are caused by the perceptions we have of our environment and by how we understand our relationship to nature. Art, it seemed, had the ability to play a great role, not only in raising awareness about the environment but also in challenging our current views and concepts of nature.

Along with another student in the department, I began investigating the notion that artists and scientists might profit from collaboration. The argument ran as such: scientists offer a wealth of detailed and factual information, while artists have an ability to illustrate and convey that information in a poignant, accessible and engaging manner. Art is free of the structures so stringently imposed upon the sciences and can explore new and creative ways of engaging a wide and varied population of people. These collaborations, therefore, have the potential to instigate beneficial behavioral changes both within the individual and the community by making our environmental issues at once more accessible and more moving.

However, it soon became clear that this collaboration, as wonderful as it sounded on paper, often did not amount to the accolade it promised. Although there are certainly a number of passionate and insightful studies addressing these connections, art-science projects are frequently dismissed as not being artsy enough for the art community or science-y enough for the science community, in the end falling upon the eyes and ears of a very small subsection of people already interested in what these studies have to say.

My research into the connections between art and conservation helps me advise artists interested in environmental issues to allow these challenges to influence their art, rather than guide it, and equally to urge scientists not to compromise their methodologies in an effort to be more artsy; but these ideas are still extremely young and nascent. Far from negating art’s role in the conservationist’s plight, I believe my research highlights the notion that conservation biology is and needs to be a truly interdisciplinary field. How we envision the future of conservation biology will alter the number and type of people willing to contribute and engage with our environmental issues. The urgency required in our efforts and the ubiquity of threat across cultures and land is so vast that conservation biology would only profit from expanding its boundaries to include more seriously the humanities and the arts. It need not be a sub-discipline of biology, as it is often envisioned, but rather a discipline of its own accord.

Incorporating art into the field of conservation biology will be a long and slow task, yet there are a number of simple and obvious steps that can help facilitate this change.  Department curriculum can be modified to include classes such as environmental or ecological art, green sculpture, green design, environmental film making and creative writing classes. These classes would not only help conservation biologists think of how to present their work in other mediums but would also cultivate a different type of relationship between scientists and their research. What if mid-term and final projects in conservation biology classes took the form of art projects instead of essays or tests?  Being forced to exercise alternate creative faculties of the mind, students might gain insight into the causes and solutions of our most pressing environmental issues in innovative ways. It would also emphasize the idea that conservation biology is a goal-orientated discipline, not a hard science in and of itself.

Science and academic journals focused on conservation can also begin to include essays, intervention proposals and research papers written by artists engaged with biodiversity loss. This will bring different views and thought processes into heretofore heavily hard-science dominated settings, offering different perspectives from which to address the goals of conservation. Articles written by artists and by ecologists should be side by side in publications proponing to represent the state of modern environmentalism and natural resource management. Integrating art into conservation biology journals will familiarize artists and scientists with each other’s works, facilitating a more effortless progression of exchange.

Far from diluting the thrust of conservation biology, these simple actions will instead extend its reach, amplifying its influence and offering greater potential to create lasting change. Indeed, it behooves the conservation biology community to welcome artists whole-heartedly and openly into their field of study, for the more disciplines conservation biology embraces, the stronger a force it will become. Why should the fight for biodiversity take place on a limited platform when so many other spheres of influence are available and willing to contribute? Is not the widening of their reach proportional to the efficacy of  their actions?