Dead or Alive: The Promise of Tourism for Shark Conservation

When many people hear the words shark and tourism in the same sentence, the first thing they think of is how to avoid these creatures of the deep. The second thing is the ubiquitous image of a small diver in a shark cage, coming face-to-face with a great white in a caricature of what these intimate interactions once were and could be. Unfortunately, the people who give in to these ideas are missing the opportunity to witness and learn about one of nature’s truly astounding creatures. While shark attacks are real and many movies and media outlets capitalize on this fear, there are common sense ways to avoid danger and have a great experience while contributing to shark conservation efforts.

According to the conservation group Oceana, an average of four people per year were killed by sharks from 2006-2010, and there were only three fatal attacks in the United States in that time (out of 179 total). Beachgoers are more than three times more likely to drown than to die from a shark attack. Compare that to the more than 25 million sharks killed by humans each year, and it becomes clear who is more dangerous.

Sharks, as top predators in the oceans and seas, are critically important to the health of the saltwater ecosystem. One of the main reasons why many shark species are endangered is the international trade in shark fins, used as a delicacy in shark fin soup, consumed primarily in Asia. According to Shark Advocates International, they are also valued for their meat, hides, teeth and livers. Due to the facts that sharks grow slowly, take a long time to reproduce, and give birth to small numbers of offspring, these fish are especially susceptible to human threats. 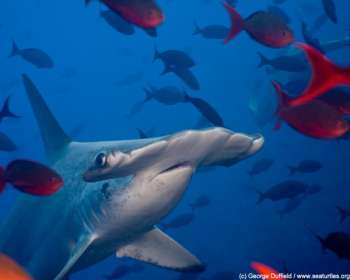 Tourism as a Conservation Tool

One strategy to help protect and research sharks that is gaining popularity is ecotourism. A recent study of sharks around Costa Rica’s Cocos Island estimated the value of a hammerhead shark to tourism at US $1.6 million each, compared to just less than $200 it could bring if caught and sold. A 2011 study by the Australian Institute of Marine Science had an even more dramatic difference, estimated a lifetime value of nearly US $2 million for a reef shark in Palau, versus only $108 for sale in a fish market. Governments are starting to take notice of this economic value: Countries including Australia, Palau and the Cook Islands have recently created large, new marine protected areas to protect sharks and other ocean life.

While diving to see sharks has its abstract value, many tour operators and volunteer organizations are taking advantage of shark tourism to directly benefit conservation. SEEtheWILD partner Sea Turtle Restoration Project has a unique trip for divers to the Cocos Island, where people can help tag hammerheads as part of a research program. In Belize, Earthwatch Institute has a volunteer program that allows participants to study shark populations and the value of marine protected areas.

Another way that travelers can support shark research is by participating in the Whale Shark Photo ID Library. Anyone with underwater photos of whale sharks, the gentle giant of the depths and the largest non-mammalian vertebrate on Earth, can upload them to this website for identification and cataloging, helping to build this important resource for conservation efforts. Finally, some shark trips generate donations for conservation efforts, including this whale shark trip to Isla Mujeres (Mexico).

For those who get sweaty at the mention of sharks, there are many ways to keep yourself safe when in the water with these animals. The easiest way is to swim with the least threatening of sharks, the whale sharks. Though these giant fish can be 40 feet long and weigh 20 tons, they don’t have teeth and are not aggressive to humans. Also, by remaining calm around sharks and keeping your distance, you can minimize the risk of experiencing a negative encounter with these fascinating creatures. If you are diving or snorkeling in areas where sharks live, ask your guide about what to expect and what species to look out for.