CHITWAN, NEPAL For three months, John Michaloski bathed, fed, and tended to elephants in Chitwan, Nepal, where he developed a relationship with an elephant named Sundar Kali. Here, John reflects on his experience living, working, and playing with the elephants. 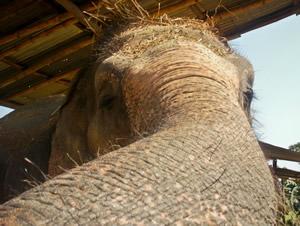 The moment I arrived at the elephant stable in Chitwan, Nepal, I was consumed. As soon as Sundar Kali came into sight I started to feel warm and whole inside. It was completely surreal to be standing next to an elephant. No cage, no chains, no zookeepers, just the elephant and me. But I instantly felt safe. In that moment, I established a connection with Sundar Kali that will never be broken.

The next day I was told to be at the elephant stable at 4:30am. I woke up at 3:30am and could not fall back asleep, so I decided to go to the stable early. When I arrived, it was pitch black outside, with only the stars and the moon to provide any light. In the stable, I walked right up to Sundar Kali and put both my hands on her forehead. She stood motionless in front of me, and in that moment I felt that we had somehow become one. 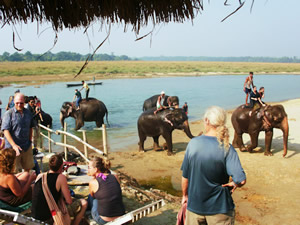 For a week’s time, Sundar Kali would not eat her koochi, an elephant food made from rice and straw. The elephant drivers, or Mahouts, would beat her with sticks, yelling “Eat! Eat!” in Nepali. Sundar Kali’s loss of appetite filled them with anger. I believed that Sundar Kali could sense that anger and that the physical abuse was not going to renew her hunger.

So, I asked the men kindly to stop their lashings. They were hesitant but respected my request. I put one hand on Sundar Kali’s forehead and one hand on the side of her face. I rested my head on her trunk. I looked into Sundar’s eyes and imagined how it would feel to be in the presence of a healthy, hungry elephant. Finally, I kissed her on the trunk, and a few moments later she began to eat. 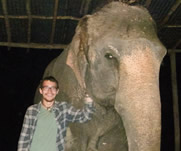 There is a spot along the Narayani River where private elephant owners bring their elephants to visit with tourists on safari. The tourists pay 100 to 500 rupees (between $1 and $7) to ride an elephant into the river. This is one of the only income sources for the Mahouts.

During one elephant bath, I had a conversation with a man from Sweden named Pontos who told me he had been afraid of elephants before visiting the bath. “My perspective changed when I sat on top of the elephant. It went from being a terrifying, huge, creature to a gentle being that I felt a strong connection and sense of safety with,” he said.

I think people often have misconceptions about the true nature of animals, as Pontos did. Once they interact with an animal physically, mentally, and emotionally, their whole outlook will often change, and that is such a beautiful transformation to watch.