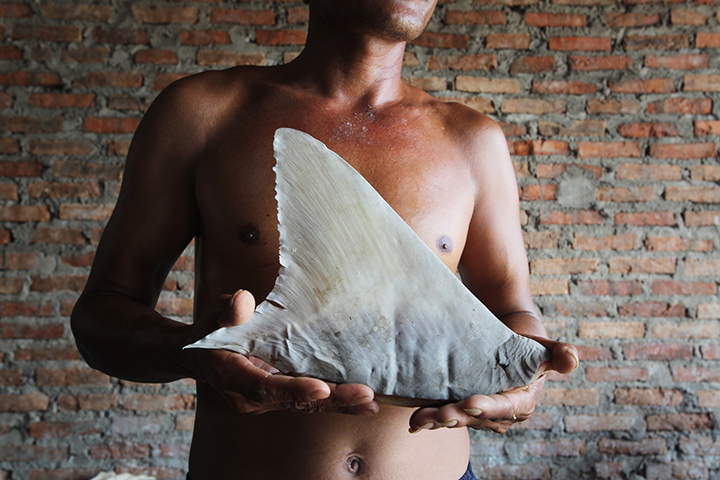 Half of the world’s shark species are threatened with extinction. Photo by Sean Gallagher.

As extinction quietly steals earth’s species, photographer and filmmaker Sean Gallagher is tapping into the popularity of social media to bring global attention to the crisis. Recognizing the urgency of the situation, Gallagher felt compelled to encourage more coverage of the problem in the mainstream media. Given the popularity of social media and Gallagher’s photographic expertise, he decided to create a specialized Instagram feed to highlight species extinction and celebrate biodiversity. The Everyday Extinction awareness campaign brings together 25 wildlife photographers, photojournalists, fine art photographers and scientists to show the world the realities of species extinction.

Tell us about one of the experiences that motivated you to inform the world about species extinction.

Through my work covering environmental issues in Asia, I had been aware of the biodiversity extinction crisis for some time; however, it was when I read the book The Sixth Extinction: An Unnatural History (2015) by Elizabeth Kolbert that it really hit home how severe this crisis was and how it was affecting all of global biodiversity. I decided that I wanted to focus more of my work on the plight of biodiversity, and use photography and film to better communicate this issue to the public.

How do you think photography communicates the stories of endangered plants and animals compared to the written word?

Visual imagery has a special ability in vividly communicating issues, whether that is topics with an environmental focus, or other important social stories. Photography captures moments that have the ability to linger in the viewer’s memory, often inspiring action or change. By using photography to communicate the plight of biodiversity, we hope to encourage dialogue about the causes, effects and solutions to the extinction crisis. Our images will hopefully have a number of purposes, such as instigating conversations, increasing awareness and inspiring action in our audience.

Image by @AdrianSteirn This was Hope, a four-year-old South African female white rhino (Ceratotherium simum) who was attacked by poachers in 2015. She’d been darted with tranquilising drugs and her horn was hacked off, she was then left for dead. Against all odds, she survived. Through the efforts of @SavingTheSurvivors Hope began to recover, she inspired conservationists and people from across the globe with her enduring spirit. Unfortunately, since then, despite all the efforts taken to ensure Hope was able to live a normal life, she succumbed to a bacterial infection in her small intestine in late 2016 after enduring several grueling operations. Hope’s story may have ended, but her legacy lives on, and she has given new energy to those fighting to save this beautiful species. White rhinos are listed as near threatened on the IUCN Red List. For more information or to assist, visit: http://www.savingthesurvivors.org/ #EverydayExtinction #Conservation #Biodiversity #Rhino #WhiteRhino #Hope #Africa #SouthAfrica #Poaching #Extinction #Trafficking #Endangered #Horn #Threatened

A post shared by Everyday Extinction (@everydayextinction) on Oct 1, 2017 at 5:47am PDT

Some of the articles I read mentioned a group of 25 photographers working on the Everyday Extinction project. As the project moves forward, will it only include the work of these individuals or are you planning to receive relevant submissions from others around the world?

While we initially started as a group of 25, we are always on the lookout for new contributors and will be expanding the pool of photographers. I have already received numerous enquiries from photographers and scientists around the world who are keen to contribute. Each month we will add new contributors who we feel strengthen and add depth to the current subjects and species covered. If someone is interested in contributing, they can contact me through Instagram or Facebook.

What are the requirements for including photographs from others in your work?

The main requirement we have is that the person has a high standard of photographic practice, i.e. they can take good photos or video, and that they are active users of Instagram. We are mainly professional photographers but we also have a growing number of professional scientists that contribute who are also very good photographers. It’s important for us to have a wide variety of professional viewpoints and also to make sure we are covering different global regions and underreported groups of animal and plant species.

Explain why you chose to use social media for this project instead of doing a series of publications. How is your reach different using Instagram rather than publishing through a magazine or journal?

Instagram is currently one of the most widely used social media platforms. It has millions of daily users who are sharing images across the world, creating a truly global ecosystem of shared imagery. With the rise of the smartphone, everybody has a camera in his or her pocket and hence there has never been a time when photography was as accessible and as popular. We want to tap into this popularity and use social media as a way to reach people on a daily basis. The Everyday Extinction feed is updated twice per day, giving our followers daily insights into the global biodiversity extinction crisis, often directly from their phones.

Image by @adriansteirn. There hasn’t been a more dangerous time to be a pangolin (Pholidota). The species has become the most trafficked mammal in the world. They are illegally traded for their scales, as bush meat or for medicinal purposes. But the threat of their extinction rarely makes news. An organisation in Zimbabwe aims to change this by educating the public about an animal many may not know even exists. Enabled by the @TikkiHywoodTrust, a group of men dedicate their lives to rehabilitating captured pangolins. They are entrusted with caring for animals that have endured major stress, often having been transported many kilometres bound in a sack, starved and dehydrated. Eight species of pangolin exist, four Asian and four African, all appear on the IUCN Red List, ranging from endangered, to critically endangered and vulnerable, all eight of the species' populations are decreasing. With the depletion of the Asian populations, poachers have redirected their efforts to Africa. For more information or to assist visit: http://www.tikkihywoodtrust.org/ #EverydayExtinction #Conservation #Biodiversity #Pangolin #Scales #Africa #Asia #Zimbabwe #Poaching #Extinction #Trafficking #Endangered

Did the Everyday Everywhere Instagram feed influence the creation of Everyday Extinction?

How do you see photography being most effective in species conservation?

Photography has the power to illuminate and highlight issues in a way that other mediums cannot. It can highlight damage, depict beauty, inspire change and provide hope. All of these things are important when trying to combat the extinction of species, whether that is through images published in the mainstream media, shown in classrooms, used by governments for campaigns, etc. All of these are possible pathways for photography to be used. Ultimately, however, photography is just one part of the solution. Action must be taken from all sectors of society if the biodiversity extinction crisis is to be averted. Photography is just one powerful tool that can be used as part of the solution.

What are your thoughts on how social media can be better used for the field of conservation?

One of the most interesting campaigns I have seen recently was the Scientists Who Selfie movement on social media. I thought this was good because it helps to give a face to scientists across the world and helps people see the real people behind the research, demystifying the profession a little and inspiring enquiry into scientists’ work. I’d like to see more scientists using social media to highlight the work they do, as I think that will inspire more people to be interested in their work and conservation issues. At Everyday Extinction, I have tried to incorporate a number of exciting scientists who are doing interesting work in the fields of conservation and who are using social media to reach new audiences. I hope this will strengthen the message we are trying to communicate.