I wake up at 4:30 a.m. in my tent and go out to admire the dark, cloud-covered forest. I meet with my team of locals to warm up and discuss our plan of action. Over a nice cup of Colombian coffee, we sit on a wet log and fantasize about catching a toucan or an owl. We have had both experiences before on this six-month journey through the cloud forest…

What brings me to the deepest part of the Andean forest? My Ph.D. research. As a graduate student at Duke University, I tasked myself with improving conservation for the most endangered tropical birds: those only found in one place (endemic), and those imperiled by habitat loss, hunting or the pet trade (threatened). I focused my efforts on the Western Andes of Colombia, an area so diverse that one could go bird watching for a day and report over 200 species. That is half the species found in the entire state of North Carolina! 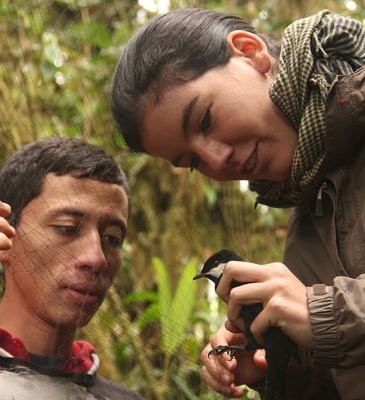 These forests currently face a wide variety of threats. Deforestation for agriculture, cattle grazing, and industrial activities such as mining and oil drilling endanger this and many other tropical biodiversity hotspots.

I am especially interested in how deforestation at lower elevations impacts the distribution of birds along elevational gradients (mountains). That brings me back to the dark, cloud-covered forest. We set out to open 15 mist nets in order to capture, identify, photograph and release birds that can give us information on the state of the bird communities and how they are impacted by deforestation. We move these nets to different elevations every five days, covering a gradient from 2,200 to 2,800 meters (7,000 to 9,000 feet). We have this experiment set up in two transects: those that are completely covered by forest, and those that are partially deforested.

In addition to mist-netting, we also record birds seen or heard in point counts, sampling a large variety of species. By studying the bird communities along these gradients, we can understand how species are currently distributed, how deforestation affects them in the present, and how climate change will exacerbate these effects in the near and distant future.

The six months we’ve spent living in these forests have been amazing, and very challenging! We started with tracts of unexplored forests that had no trails and obviously no cabins (or bathrooms). The first hike through these forests revealed that what I had mapped on Google Earth was hard to access … and that the statistical models would have to adapt to some chaos. The slopes were steep and muddy. Some areas had unstable soil made out of roots that would break as soon as you stepped on them.

These Andean forests seem untamed, but they will not remain so for long. Deforestation is creeping up these mountains. A planned road will cut the deep Choco forest in half. It will bring “development” and, with it, hunting and degradation. 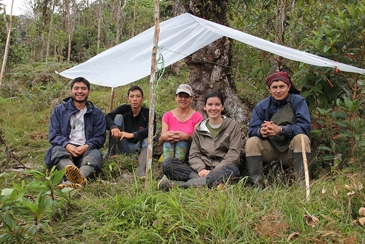 Why is that? Some species that depend on seasonal resources, such as fruit or nectar, migrate altitudinally (up and down mountains) in search of their preferred food source. Their foraging areas are reduced when portions of forest are cut down.

My colleagues and I sit together for a warm dinner before getting inside our tents, where we will dream about the next day. Once again we will be studying some of the most beautiful birds on this planet, and perhaps helping to save them.

Photos are copyright protected and may not be reproduced without permission. Photos  are used  with the permission of  Natalia Ocampo-Peñuela.