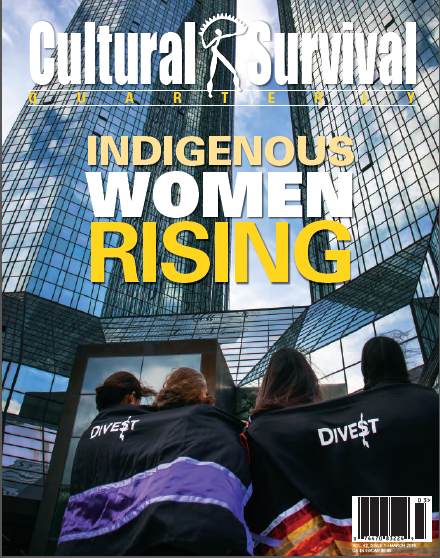 Indigenous peoples hold knowledge and traditions that have been passed down over generations, providing insights into different species, their roles within broader ecosystems and how to protect them.

Cultural Survival has been supporting Indigenous peoples in advocating for their rights and their homelands since 1972. The organization supports Indigenous peoples through grant-making, advocacy, and community radio and journalism efforts. Radio is a particularly important tool, especially in Indigenous communities with limited electricity or internet access.

Cultural Survival also recognizes the importance of supporting the next generation of Indigenous leaders, and recently launched an initiative to empower young, aspiring journalists and radio broadcasters. The fellowship will support Indigenous youth, ages 14 to 25, for a 6 to 8 month period. Fellows will participate in community radio projects while learning about international Indigenous rights advocacy. Six new fellows were announced in March 2018, representing communities in Mexico, Guatemala, Costa Rica and Ecuador. The fellows already serve as community leaders and have demonstrated experience in radio production. Through the new program, they will participate in trainings, conferences, radio production projects and community radio exchanges. Fellows will also be mentored by Cultural Survival staff to further develop their skills.

“Youth are the future and hold the power to shift the dynamics of the world,” says Cultural Survival’s Indigenous Community Media Youth Fellowship Coordinator, Nati Garcia. “Indigenous youth in particular continue to face racism and discrimination, and are still marginalized in society. However, when they have a sense of belonging and a strong cultural identity, they become resilient, powerful individuals.”

From racism to language preservation, the youth fellows face a range of issues affecting the well-being of their people, cultures and communities. With respect to biodiversity issues, the new fellows bring important perspectives.

According to Cultural Survival, many governments and multinational corporations still operate mining and development activities on Indigenous lands, often without the consent of local Indigenous peoples. Such activities can create conflict with the species and ecosystems that are so important to Indigenous cultures and livelihoods.

“Indigenous peoples have been caretakers of their lands for thousands of years, where a profound relationship is intertwined with their identity, spirituality, culture and language,” says Garcia. “Their development and capacity-building in media, journalism, advocacy, technical abilities, and regional knowledge will benefit and enforce their self-efficacy for their future efforts and participation in the global movement of Indigenous peoples’ rights.”

Cultural Survival’s has worked with many Indigenous leaders and advocates over the years. The organization aspires to develop not only community leaders, but leaders whose voices can also be elevated to the global stage.