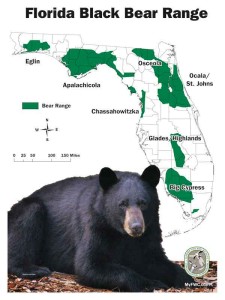 The Florida black bear, a subspecies of the North American black bear, was removed from Florida’s Endangered Species List by the Florida Fish and Wildlife Conservation Commission on June 27th. 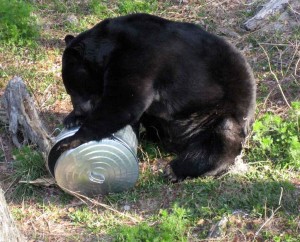 After conversations with the public and other stakeholders the FWC approved a ten year  “Florida Black Bear Management Plan” to protect and perserve the current Florida black bear population as well as to provide a framework for monitoring the bears.  Under the plan state-wide bear hunting will reamin illegal. Harming or molesting a black bear will be a misdemeanor.  Bears and their habitats will be protected and conserved. Wildlife officials aim to increase bear populations in low density areas (areas with less than 200 bears) and keep at least one area, such as Ocala National Forest, a high density area with over 1,000 bears.  The plan will go into effect after the official bear status change in August.

Rising bear numbers and continued depletion of the forests and swamps in which they reside due to development has pushed the bear into the public. As the bear population continues to rise, the frequency of public interactions with the Florida black bear will increase as well.  Currently over 100 bears die on roadways each year, and reports of bears in backyards and towns have more than doubled. 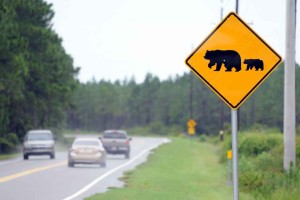 Keeping bears off roads and away from populated areas is no easy task.

“The best thing that Florida can do to protect bears is to conserve the lands where they roam with a wildlife corridor running the length of the state, and limit there interactions with cars by constructing highway underpasses.” - Commissioner Rob Bergeron of Weston, as reported by The Miami Herald.

“We have bears where we have never had bears before,” said Mike Orlando, a bear coordinator with the FWC, in an interview with the Tampa Bay Times. Orlando was commenting on a recent bear capture on Busch Boulevard near the University of Florida in Tampa. The same bear was captured on Sanibel Island last year after fleeing from Big Cypress National Preserve in southwest Florida.

Many bears, Orlando said, encounter humans while looking for food or crossing cities trying to find a new home, when their own habitat is destroyed. Some young male bears are trying to mark out their own territory.

Commission Chair Kathy Barco warns Floridians that as bear populations rise so will bear-people interactions. People need to adapt to this change.
“This is a success story. But there’s a huge disconnect: People want bears, but not in their yard. ‘Why do I have to change the way I live?’ At some point, you have to learn to live with these guys.” said Barco, as quoted by the Miami Herald.

Despite arguments from skeptics – the decision has been made. Now it is up to the people and government of Florida to protect the black bear, and prove they made the right decision.