For the Love of Chimpanzees 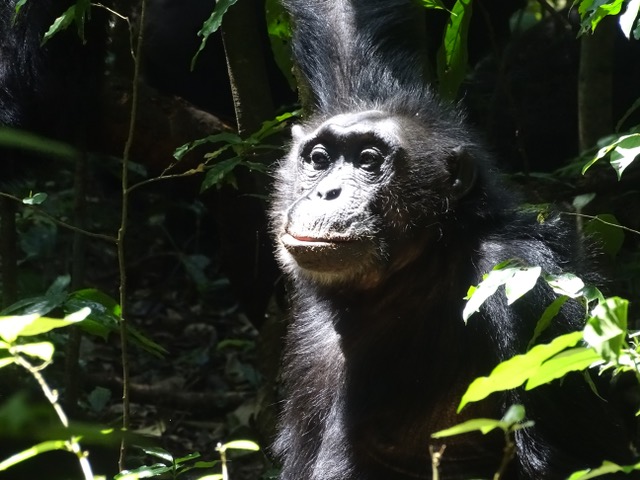 Chimpanzees live primarily in large intact forests dotted across Equatorial Africa and, out of all other animal species, are considered our closest living relatives. Despite their large range (25 countries), they are already extinct in four of those countries and the IUCN lists them as “endangered.” The Jane Goodall Institute (JGI) reports that there were about 1 million chimpanzees at the turn of the century — today their numbers are estimated at 172,000 to 300,000. With chimpanzee populations continuing to decline, JGI fears that we only have 1½ to 2 generations to correct this spiraling trend.

Chimpanzees are in decline for a number of reasons, most associated with humans and habitat loss. Their habitat is being cleared for agriculture, logging and mining. Diseases like Ebola Fever and the commercial bushmeat and exotic pet trades also pose serious dangers to this species.

Why do I care about all this? Well, in 1998 I had a Fulbright Scholarship to study a community of chimpanzees in the Budongo Forest Reserve in Uganda. Budongo was founded by Professor Vernon Reynolds in 1962. He was forced to leave the site due to civil unrest, but was able to return in the late 80s. He was shocked to find that chimpanzee infants were being captured in Budongo and smuggled to Dubai. Reynolds knew that he could help this population if could get the funding needed to create a research site. This goal came to fruition, and the Budongo Conservation Field Station became an international center of research and conservation. Prof. Reynolds, born in 1935, has an amazing mind and continues to conduct chimpanzee research.

Under the guidance of Dr. Michael Huffman, I began studying self-medicative behavior in chimpanzees. At the time Dr. Huffman was studying chimpanzees at Mahale Mountain National Park in Tanzania. There, he documented behavior that appeared to be self-medicative (Huffman, Gotoh, Izutsu, Koshimizu, & Kalunde, 1993). One of the most intriguing observations he saw was that of an adult female named Chausiku. She had difficulty walking, couldn’t keep up with the community and had diarrhea. She purposely moved toward a small shrub, Vernonia amygdalia, commonly known as bitterleaf. She sat down, pulled off some branches, chewed the tips and swallowed the juice. Within 24 hours she was moving with the other chimps and gorging on a perennial favorite — figs. I was hoping to see similar behaviors in Budongo and then compare them with other chimpanzee populations. 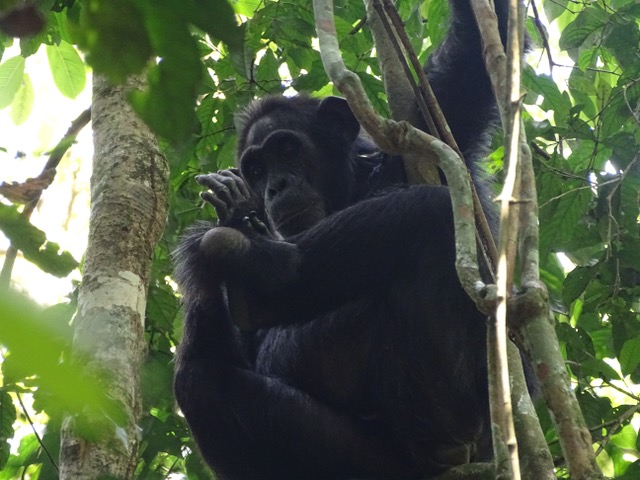 The life of a field biologist is a strange one. You get settled into your new abode, whether it’s a cabin, hut, tent or yurt. If you’re lucky, the mosquitos don’t carry malaria. If they do, as was the case in Budongo, you put up your mosquito net, throw on your hiking boots and head into the forest. But you don’t go alone. It’s not safe to move alone, so we spend our days with our animal subjects and an invaluable field assistant (FA). I could write a whole story on FAs, but for the moment let’s just say that they are the backbone of research sites. The field assistants in Budongo know all the chimpanzees by heart. To be more precise, they don’t just know their faces, they also know the females by their sexual swellings and the males by the size and shape of their testicles. The FAs teach students what the chimpanzees eat, how and where they move, which chimpanzees are friends, who is high ranking and which “children” belong to which momma.

I hadn’t been in Budongo long when I had the pleasure of meeting Nambi, who was born in or before 1962. During her life, she had delivered five offspring: Muga, Andy, Musa, Nora and Night. Muga and Andy died fairly young, and Nora and Night immigrated to a neighboring community. To avoid inbreeding, female chimpanzees leave the community they were born into once they are sexually mature. Nambi and I have a few things in common. We’re both mothers and were born about the same time, though I didn’t have children when I first met her. When spending time with chimp mommas, you can’t help but notice how different their mothering styles are. Some new moms don’t let their offspring out of their reach or rescue them at the first peep. Not Nambi — she let her children try to solve their own problems and only rescued them when they were truly in harm’s way. I decided that I would emulate Nambi’s mothering style when I had children of my own. After leaving Uganda in 1999, I returned to Colorado, had my children and got my PhD from Kyoto University in Japan. I then had the good fortune to return to Budongo in 2015.

I wasn’t sure how long chimpanzees lived in the wild, but I was thrilled to learn that Nambi was still around and commonly seen. Chimpanzees have a fission-fusion society, which means they regularly come together and break apart. Like humans, chimpanzees have individual personalities. There are shyer ones who usually keep to themselves and bolder individuals who seem to beckon the researchers to keep up. You might think there’s no advantage to a chimpanzee being followed by researchers, but you’d be wrong. Firstly, there is strength in numbers. People living outside the forest enter and set snares to catch animals for food. Their targets are usually duiker and bushbuck, but chimpanzees also get caught in them. A 2008 publication stated that between 2005 and 2007, BFCS staff removed approximately 220 snares every month (Amati, Babweteera, & Wittig, 2008). They went on to say that about 30 percent of adult members “show permanent mutilation from snare injuries.” These mutilations are often missing hands or feet, or twisted limbs. Those are the lucky ones; the unlucky die. Over the years, chimps have become better at recognizing snares, but those placing them have also stepped up their game. Fortunately, BCFS staff continue to search for them and remove all that they find.

Secondly, researchers can function as a shield. The Budongo chimpanzees seem to recognize that the researchers neither hurt nor help— and that neighboring communities don’t know that. I was moving with the chimps one day when they entered a neighboring community’s territory. They were eyeing the other community’s Cynometra seeds since they had eaten all their own. The Budongo chimps were moving slowly so the researchers could keep up. When the other community came rushing out to defend their territory from the invaders, they took one look at us, turned tail and ran. I know I’m anthropomorphizing, but I could swear I heard the Budongo chimps laughing. 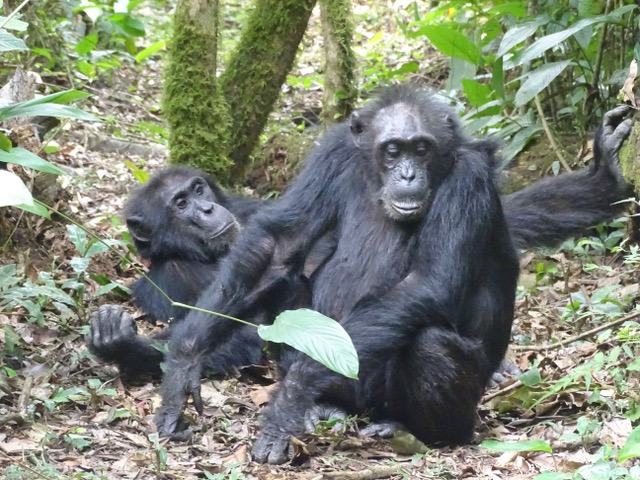 Researchers try hard to not interfere with chimpanzee life, but it’s a challenge. It seems only fair that we offer them something in return for the privilege of spending time with them. We earn our degrees and publish papers, but what’s in it for them? Part of the reason I returned to Budongo was to give back to this community. I study soil eating, also known as geophagy, and am determined to understand why animals eat soil. It’s clear to me that it’s an adaptive behavior and a form of self-medication. More importantly, if I can demonstrate that soil is important to health, I can urge government officials and conservationists to protect and conserve sites where animals congregate to eat soil.

One review found that approximately 300 kinds of animals eat soil (Young, Sherman, Lucks, & Pelto, 2011). Earlier this year, I published an article that reviewed non-human primates and found that over 130 eat some form of earth (Pebsworth, Huffman, Lambert, & Young, 2019). My current research from Budongo confirmed that soil from one site has the ability to bind up toxins produced by plants to keep animals from eating them. Pretty sneaky. Soil eating appears to protect the body from gastronintestinal distress caused by plant toxins. That is part of the story, but not the whole story.

Not all soil is the same. Some soil can bind up toxins and some can’t. I won’t bore you will the details, but suffice it to say that chimps eat soil from several different sites, including termite mounds. A recent paper from Vernon Reynolds discusses the acquisition of minerals from eating termite mounds (Reynolds, Pascual‐Garrido, Lloyd, Lyons, & Hobaiter, 2019). See, in addition to protecting your gut from plant toxins, parasites and other pathogens, soil may also provide micronutrients.

The global climate crisis is affecting more systems and species than many realize. Unless you live under a rock, you’ve read about the plight of the polar bear. But do you know that the increase in carbon dioxide is negatively affecting plants? The nutritional quality of plants is in decline. One study looked at 10 tree species in Kibale National Park in Uganda. They found that mature leaves had increased their fiber concentrations by 10 percent, while young leaves (which chimpanzees and other animals like to eat) had increased it by 15 percent. Protein, on the other hand, had decreased by 6 percent (Rothman et al., 2015). Climate change is also having an effect on plant toxins. One study showed that tannins, a common plant toxin, have increased by 19 percent (Marsh et al., 2013).

So even if we don’t kill animals to eat them or take their land away to grow palm oil, our production of CO2from a myriad of sources is decreasing the quality of their food. Our recently published study also shows that tannin concentrations are increasing (Pebsworth, Hillier, et al., 2019). Luckily for the chimps, one of the geophagy sites they visit binds up tannins. Another curious effect of tannins is that they can interfere with iron uptake.

Past studies have shown that the iron found in soil isn’t bioavailable (Seim et al., 2013). A research team at Cornell University figured out that you can assess iron bioavailability and its uptake with an in vitro technique that uses human colon cancer cells (epithelial colorectal adenocarcinoma cells, referred to as CaCO2 cell cultures). One of my co-authors, Ray Glahn, used these cells to see if the iron in the soil from Budongo was bioavailable. I previously studied baboons that ate soil in South Africa and Glahn tested the soil the baboons ate. Despite containing iron oxides, the iron wasn’t available (Pebsworth et al., 2013). I was expecting the same outcome with the Ugandan soil samples. Needless to say, we were all surprised to see that soil from three of four geophagy sites released bioavailable iron. This line of research just seems to give me more questions than answers. The three geophagy sites with bioavailable iron are found at the base of trees. We started brainstorming — were the roots exuding something that put the iron in solution, or was it iron-oxidizing bacteria? We still don’t know, but I do know that soil is important to chimpanzee health. For the sake of my old friend Nambi, I’m asking — okay I’m begging — to protect and conserve sites where animals come to eat earth. Though it may just look like just dirt to some, it’s not. If I’ve piqued your curiosity, you can check out our video here and paper here.

Today is July 14 and World Chimpanzee Day, commemorating the day Jane Goodall first stepped foot in Gombe Stream National Park in Tanzania. Please consider donating to an organization like Voices for Biodiversity, whose mission is “to build a diverse story-sharing community to save biodiversity.” And you can share my story showcasing the uniqueness of chimpanzees, their plight, and appropriate actions you can take to protect and conserve them.

Finally, here are a few ways to reduce your carbon footprint: 1) stop eating (or eat less) meat, 2) unplug your devices, 3) walk, ride your bike, take public transportation (drive less) and 4) eat local or, better yet, grow your own food. In short, behave like we’re not the only species on the planet.

Huffman, M. A., Gotoh, S., Izutsu, D., Koshimizu, K., & Kalunde, M. S. (1993). Further observations on the use of the medicinal plant, Vernonia amygdalina(Del). By a wild chimpanzee, its possible effect on parasite load, and its phytochemistry.