Forecasting a Future for Cheetahs 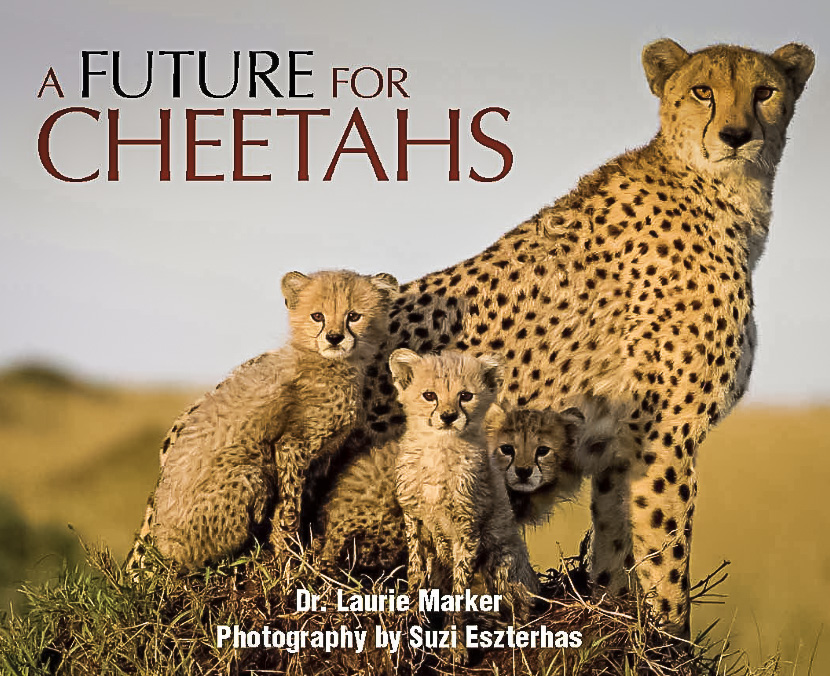 “When a cheetah looks at you, it looks beyond you. A quick glimpse has the power to penetrate into your soul, and transport you into a different world: a world of past…and future. For the cheetah, their future is unknown and in our hands as humans to ensure they survive.” –Dr. Laurie Marker, A Future for Cheetahs.

A century ago, the cheetah was widely distributed across 44 countries in Africa and Asia. Today, the population has disappeared in 25 of those 44 countries. Only an estimated 100 cheetahs remain in Asia—did you even know they used to exist there naturally? Alarmingly, we have lost 90 percent of the cheetah population over the past 100 years.

Dr. Laurie Marker, an American zoologist, has worked on cheetah conservation since the 1970s. In 1990, she set up the non-profit Cheetah Conservation Fund (CCF) in Namibia. CCF works to protect and rehabilitate injured cheetahs, and serves as a center for research and education for cheetah conservation.

Dr. Marker’s recently published book, A Future for Cheetahs, features stunning photography from wildlife photographer Suzy Eszterhas and provides an in-depth look at this charismatic big cat and the threats it faces. The narrative is informative, and the accompanying photographs provide a powerfully intimate glimpse into life on the plains. With a forward by renowned biologist George Schaller, A Future for Cheetahs takes the reader through the lifecycle of a cheetah, from birth through adolescence and adulthood.

The book also provides a compelling look at the cheetah’s potential future. Because of low populations, cheetahs possess a lack of genetic variation, relative to other species, which makes cheetahs more susceptible to disease and environmental changes, endangering its long-term survival. Cheetahs also face habitat destruction and declining sources of prey, largely due to human encroachment on the cheetah’s habitat.

For these reasons, the immediate implementation of conservation strategies is critical to ensure the cheetah’s survival. CCF cares for injured and orphaned cheetahs that require critical care at a young age, and prepares them for re-release into the wild. Because larger and more aggressive predators serve as competition for the cheetah’s prey, 90 percent of cheetahs do not live in protected areas, and often have to survive alongside human communities. As a result, CCF works with local farmers to help them find ways to protect their herds from cheetah predation in the hope of discouraging farmers from killing cats that attack livestock. Protecting the final remnants of the cheetah population also means working closely with local residents to conserve the remaining habitats of the cheetah.

Following the recent release of A Future for Cheetahs, Dr. Marker sat down with Voices for Biodiversity’s Sarah Abdelrahim to answer a few questions about her work.

We live in a time when poaching, human encroachment, and habitat fragmentation are posing threats to many large mammals. What makes the plight of the cheetah unique?

The cheetah doesn’t do very well in wildlife reserves due to competition with larger predators. As such, the cheetah is one of the few apex predators that still live outside protected areas, where it plays a very important role in maintaining the health of ecosystems, since the absolute lack of predators could result in unhealthy, large populations of grazers (the cheetah’s prey). This in turn would cause overgrazing and desertification—a problem aggravated by cattle and livestock. By hunting prey that is old, slow, sick or weak, the cheetah contributes to healthy and sustainable populations of grazers.

How does the Cheetah Conservation Fund work with local communities and, more broadly, how does it promote its mission outside of Namibia and Africa?

CCF is a global organization with a local approach. In Namibia, where we are based, CCF’s programs, all designed based on our scientific research, emphasize education and training that includes children, youth, farmers, and the community in general. Our aim is to convey the importance of healthy ecosystems that benefit everyone, and build our capacity to empower communities.CCF has reached more than 300,000 children and youth, and more than 3,000 farmers. As a result, tolerance toward cheetahs is increasing. Where the cheetah used to be considered vermin due to conflict with humans and their livestock, today the species is increasingly accepted as a predator with which it is possible to co-exist without livelihoods being affected.

Our Livestock Guarding Dog program—along with integrated livestock-predator management courses that train farmers on techniques to improve the health and productivity of their herds—has been so successful that, today, livestock farmers who use our dogs to protect their herds report an 80 to 100 percent reduction in losses, not only to cheetahs, but to other predators as well. In addition, as CCF is a model farm, we are developing alternative income strategies such as the production of goat-milk products, gape growing, apiculture, and horticulture.

Similarly, CCF provides advice, educational materials, and training to hundreds of conservation biologists from all cheetah-range countries in an effort to enable them to adopt and adapt our programs in their respective countries. Our model has served as the foundation for cheetah conservation programs in countries like Kenya, Botswana, Iran [the last Asian country in which they still occur], Tanzania, and Zimbabwe. We work closely with countries such as Iran and Algeria, where cheetah populations have greatly decreased, and have acted as consultants in re-introduction plans in countries where the cheetah is now extinct, like India, Uzbekistan, and areas of Zambia.

Internationally, we fight the illegal taking of wild cheetahs for the pet trade—working with governments, NGOs, and individuals to reduce demand. In addition, my staff, global CCF boards and trustees, chapter members, and I work tirelessly to educate the public in general about the cheetah’s plight through the internet and social media, lectures, events, and educational materials. Educating the public is another important tool that allows us to raise much-needed funds to continue carrying out our programs on behalf of the wild cheetah.

Your book talks about safaris and African wildlife tourism, and the threats that they can pose. You mention that safari vehicles can often stand in the way of hunting cheetahs and their prey, and that sometimes they separate juvenile cheetahs from their mothers. Without banning safaris, which fund conservation and anti-poaching activities, what can be done to ensure that tourism activities are conducted in a less intrusive manner?

Ecotourism is a very important source of income in African countries, and undoubtedly the cheetah is one of the species every visitor dreams of seeing during an African safari. As such, it is important to not only maintain, but to encourage responsible tourism. Fortunately, there are already some programs and campaigns in place that educate tour operators and tourists on how to admire the wonders of Africa in a safe and respectful way for both animals and people. What is needed is more education as well as enforcement of laws and regulations that, in most cases, are already in place and that restrict activities that affect wildlife, such as off-road driving. Our hope is that those who visit Africa discourage irresponsible behavior by safari guides and that tour operators enforce the rules amongst their staff.

Additionally, CCF joins other conservation organizations in discouraging activities that might utilize animals as tourist attractions under the guise of conservation by providing a list of questions tourists and volunteers should ask when visiting facilities that promote photo opportunities or playing with cubs.

In your book, I find it very interesting that you point out the role of women in conservation. You mention that for every year of schooling, a woman becomes more involved in her community and more concerned about the environment. Please talk a little more about this?

The education of women is critical in Africa and globally. Women are the caregivers to children and elders, and they care for the families and the communities. Unfortunately, women are objectified in many cultures of the world. Men are given the opportunities to go to school, as this is the culture; men are the breadwinners and women the bread makers! Also, the cultures in many regions do not allow women to be in the public sphere; therefore, it is important to help spread the word and assist in getting women into school to begin with, then into colleges!

You set up the Cheetah Conservation Fund more than 20 years ago. Has the long-term survival of the cheetah become more promising since then?

In Namibia, where we are based, I can say with confidence that the cheetah’s long-term survival looks promising. When I first arrived in Namibia in 1991, 24 years ago, the population was well under 2,500 cheetahs. Today, thanks to the Namibian people’s willingness to work with us, we estimate that the cheetah population is close to 4,000 cheetahs. That is practically one-third of the entire cheetah population across its range, which today comprises 24 African countries, with fewer than 100 in Iran.

Sadly, the picture is not as promising in other countries, and we must continue to expand our programs and training, particularly where cheetah populations live in small numbers, and where poverty and overpopulation play an important role in the cheetah’s decline. We believe that it falls on everyone—not only conservation organizations, but also governments and the public in general—to improve the health and economy of the peoples that share their land with these big cats and other wildlife.

What are the highest priorities for the Cheetah Conservation Fund, and what are some conservation efforts that will have the greatest impact on cheetah conservation?

Two of our greatest concerns are human-wildlife conflict and loss of habitat across the cheetah range. We know our programs work, as we have seen in Namibia through training, education, alternative income opportunities, and our Bushblok program. Bushblok is a high-heat, clean-burning fuel log produced by harvesting thornbush. Thornbush has spread rampantly due to overgrazing, which also causes desertification. By clearing the  veldt  of this thornbush, the grass can grow back for the benefit of wildlife and farmers alike. But there is much to be done if we are to have any hope of conserving the cheetah for future generations. It is imperative that we expand our programs further within Namibia and beyond. At CCF, we firmly believe that conservation cannot succeed if people cannot benefit from it. To save the cheetah, we need to save the people that share their land with this magnificent African icon.

A Future for Cheetahs can be purchased by clicking here. A significant portion of the donation will support the Cheetah Conservation Fund.

Photos are copyright protected and may not be reproduced without permission. Photos are used with the permission of Dr. Laurie Marker.