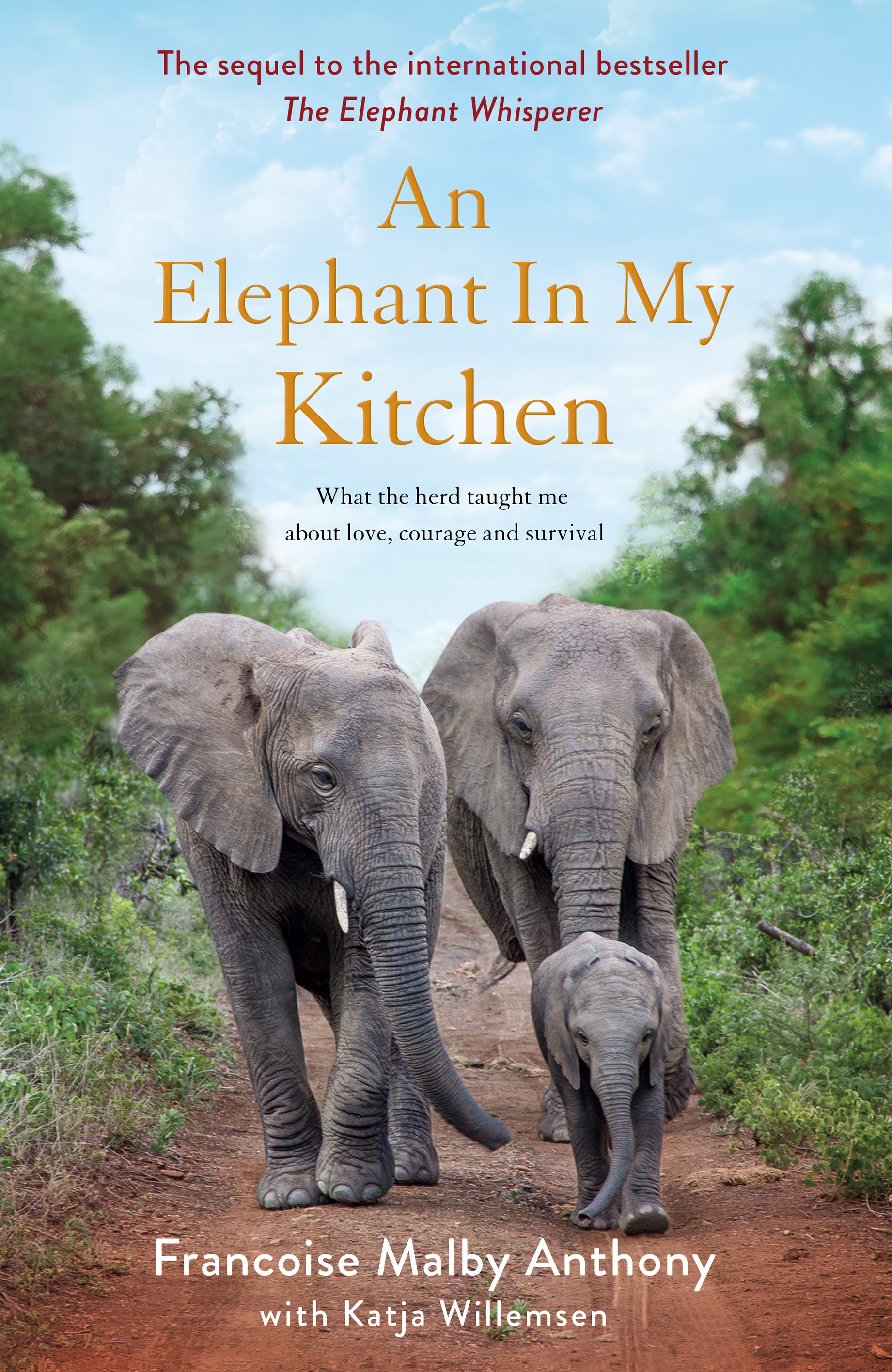 Françoise Malby-Anthony and her husband, best-selling author Lawrence Anthony, ran the Thula Thula game reserve in South Africa together until he suddenly passed away in 2012. In her recently released memoir An Elephant In My Kitchen: What the herd taught me about love, courage and survival, Françoise documents her experience being the sole person in charge of a reserve. Her efforts to stop poaching, the challenges of rehabilitating injured and orphaned animals, the shared grieving process of losing Lawrence and the conservation successes of the reserve are all powerfully portrayed. The book, published in July this year, is already going to be translated into French and German, and two film production companies are interested in bringing her remarkable tale to the big screen.

I had the pleasure of meeting Françoise when she was in London on her book tour. The memoir is already a best-seller in South Africa, and will undoubtedly rivet readers around the world. Thula Thula is now in its twentieth year and, in the wake of a tragedy at the reserve’s rhino orphanage in February last year when poachers killed two rhino calves for their horns, the publication achieves what the author tells me she set out to do: “I wanted to update people on how Thula Thula is doing after losing Lawrence, to spread more awareness about poaching and the work that we do to protect our wildlife, and to contribute to wildlife conservation as a whole.” 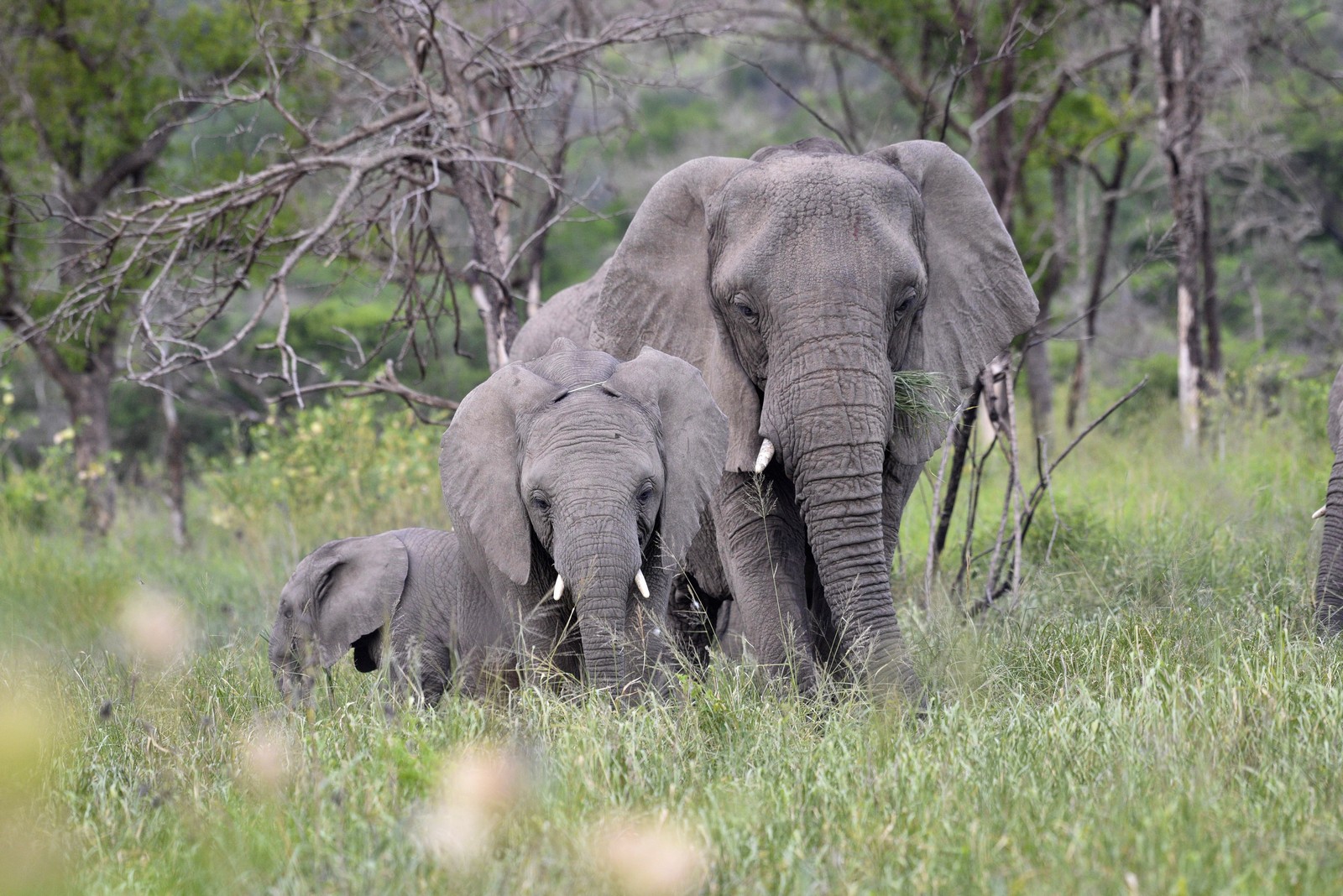 The first chapter begins, as Françoise explains, “when the herd unexpectedly, just after Lawrence’s death, comes to pay their respects. And then they came back at the same time for the following two years.” It was important to her that the book “show that elephants, and all animals in general, have souls, and that we should be relating to them like other living, breathing creatures, just like we do with humans […] everyone can communicate with animals, as long as you see them as having souls and emotions.”

The herd that is part of the book’s title is central to the memoir because, as Françoise shares, “the herd has a very important place for all of us, and it was very important to Lawrence.” The herd started off as a rogue group of seven elephants who would certainly have been killed if Lawrence and Françoise had not decided to take them on. The initial trials the herd caused, such as the search for them after they escaped the reserve, paid off. Trust and affection grew, and the herd now consists of twenty-nine elephants. 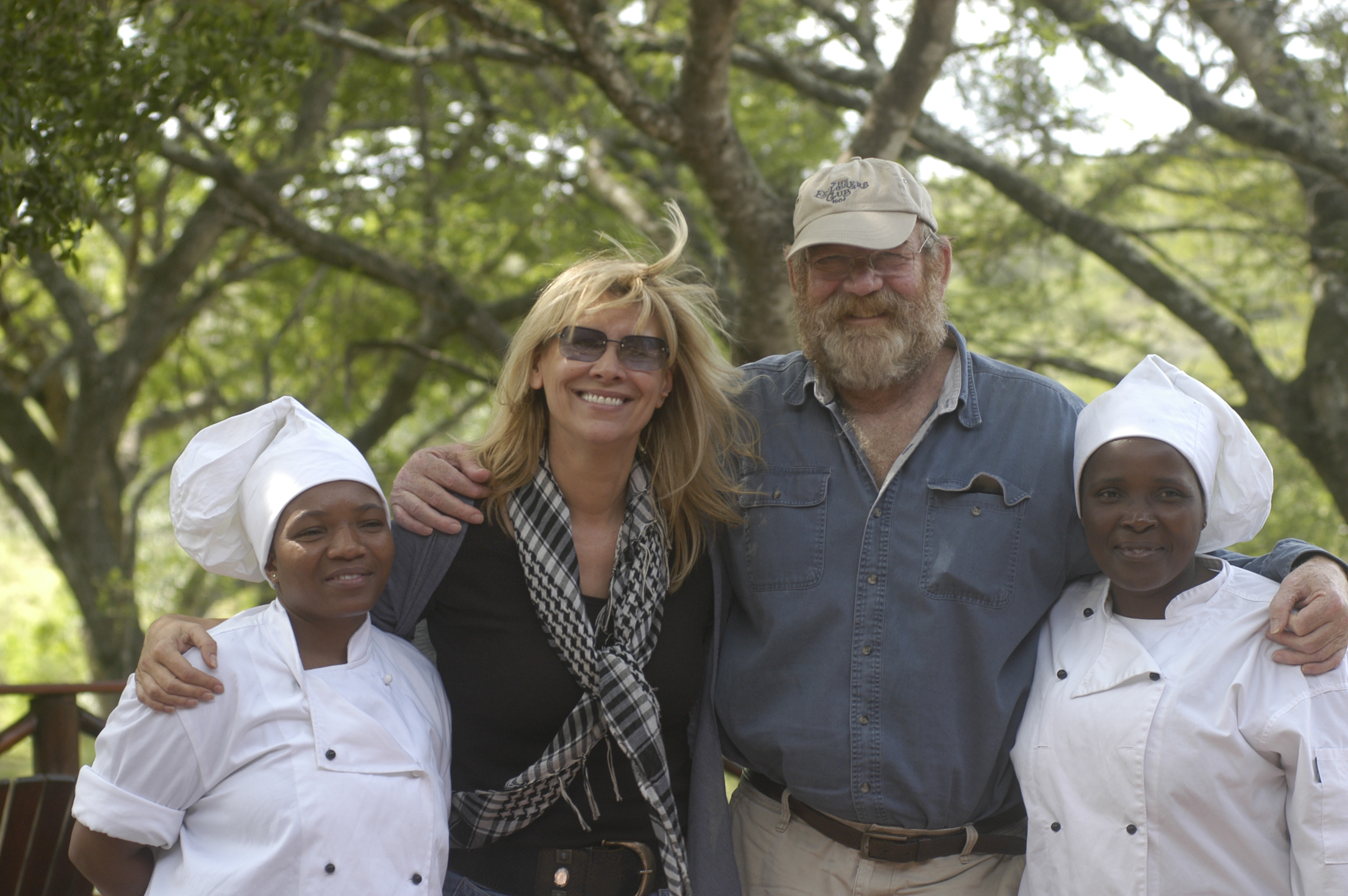 Before Lawrence passed away, Françoise tells me, “They knew Lawrence well. They knew me a little bit. I think they realized that once Lawrence had gone, I would be there for them. I had to build their trust on my side.” She was compelled to write about one memorable occasion, and explains “in the book, there is the rescuing of a baby elephant. It had a snare around its mouth, and we saved him. That evening I invited the whole staff, the security staff, the rangers, for a drink at the lodge, and guess who arrived — the whole herd to thank us! I think they realized we were doing good for them.”

Snares are a huge problem for conservationists in South Africa. In An Elephant In My Kitchen, Françoise details some of her experiences with what locals have dubbed the silent killers. She tells me: “Unfortunately they trap a lot of animals. They can leave animals permanently damaged. For the larger animals, elephants and rhinos, they are not too dangerous, but for the babies they are. Nana, a female elephant, had a snare around her leg. We had one baby rhino with a snare around its ears, and it lost half of its ear. A baby elephant got its trunk ensnared, and a big chunk was taken out of it.” 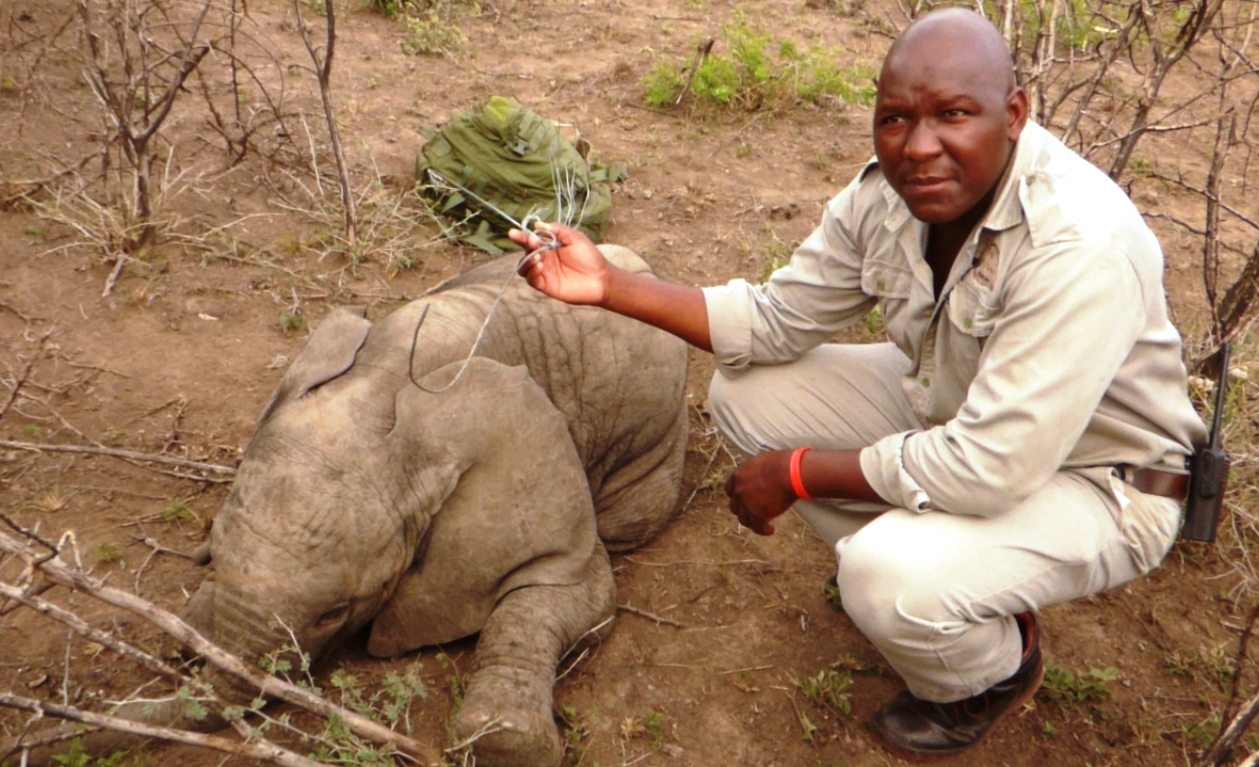 Tackling poachers is another one of the biggest trials for conservationists. In July this year, two men shot at the elephants and killed a few of the animals. Thula Thula’s anti-poaching K9 unit intervened, fighting the poachers all through the night. "One poacher was killed and one was seriously wounded. The others are currently in jail awaiting trial.”

In the constant battle against poachers, technology can be a powerful tool. As Françoise tells me, “Technology is foundational to how conservation can move forward. Since the orphanage got hit, we have had to take some serious security measures. We have set up 14 cameras over the game reserve, and we change the positions of the cameras every two weeks. We also have satellite collars and GPS collars on the feet of our rhinos so we can find them.”

Thula Thula is going from strength to strength. Françoise explains: “We had 1,500 hectares when we started; now we have 4,500 hectares. My plan is to further expand by 3,500 hectares because we have reached our maximum capacity of elephants. We have been giving reversible contraception jabs to our male elephants every six months for the last six years. So as soon as we have space, we can allow the herd to grow. We have no culling or selling of animals — we work to accommodate the animals we have.” 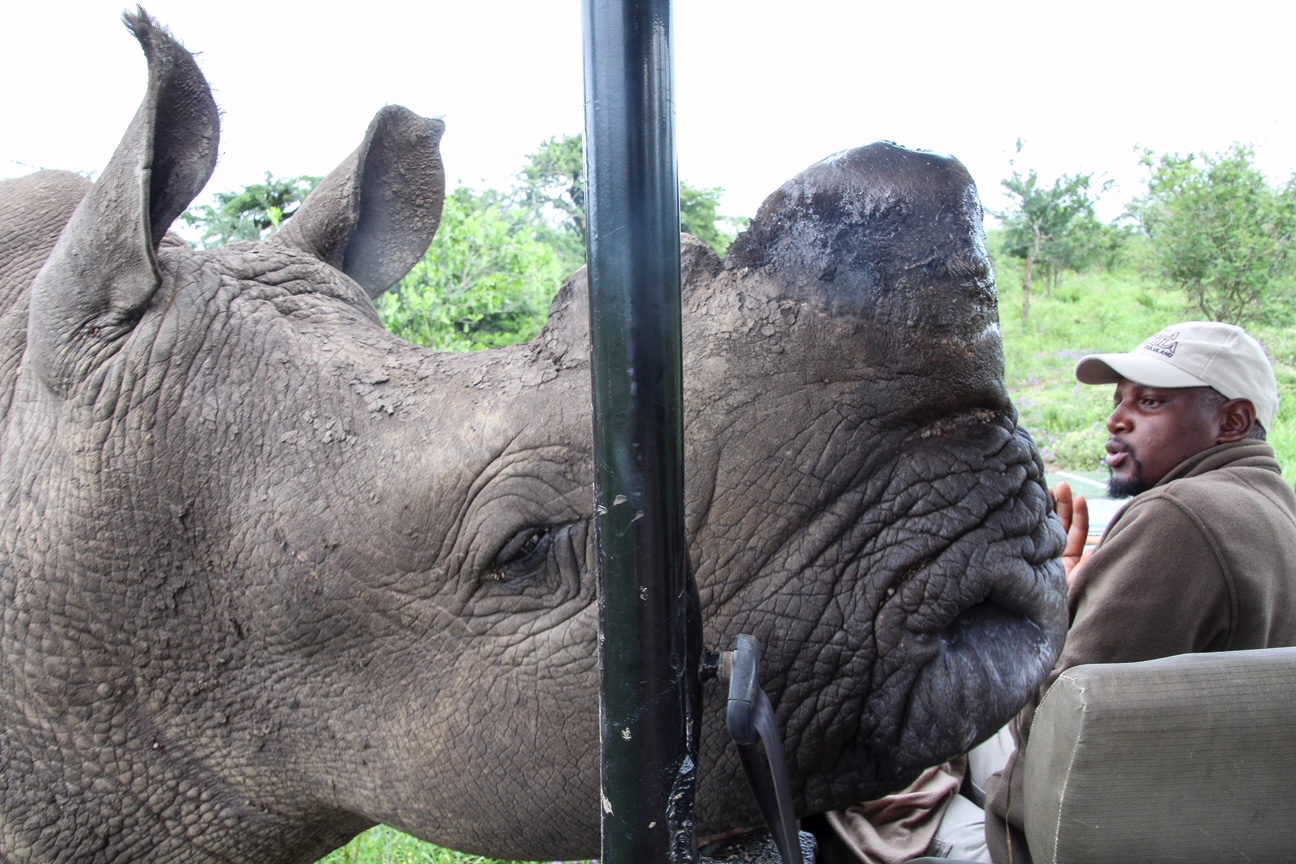 A recent change at Thula Thula that Françoise describes in her book is the transition of the rhino orphanage into the rescue and rehabilitation centre for all wildlife. She shares with me that “antelopes and genet cats are just some of the animal species that have been injured and are brought in from all over. They are babies and so they cannot survive on their own; as soon as they are old enough to survive, we release them into the game reserve.”

Visitors are given a warm welcome at Thula Thula, who can stay in one of the four-star lodges, and there is also a new volunteering program. Françoise proudly describes it to me: “People come for photo safaris, and they see the beautiful side of the reserve. Now I have just created the Thula Thula Volunteers Academy. It is a beautiful project because it has been designed to inspire and to educate. They pay a small amount of money, and then they come and proactively learn the work that has to be done to run a game reserve. They stay on a beautiful campsite on top of a hill with beautiful views. It’s for people who want to contribute to conservation. The money they pay, one hundred percent of it, goes back into conservation. It all goes to the South African Conservation Fund — it is a win-win situation. They learn about how a game reserve is run, from anti-poaching to rehabilitation programs. Also, every two weeks a person from a surrounding local community attends for free; with the education they gain, we are hoping to spread the importance of conservation to the people who have the most to lose without it — and the most to gain from it.”