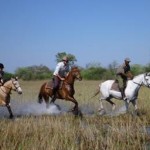 They say that once you have seen Africa you never get it out of your system. I have only just returned from my horseback riding safari in the Okavanga Delta in Botswana, and my dreams at night are filled with images of elephants trampling down the trees to reach the tender leaves at the tops (elephants are so destructive!), or of antelopes nibbling at the relentless new shoots sent up by the still rooted trees (the ever-productive cycle of Nature). My dreams are a jumble of water and endless savannah and of riding horses at a gallop through the shallow lakes and watery pathways of this dry desert.

For years I wanted to visit Africa. But where? Which safari? The moment I heard of the horseback riding in Botswana, my choice was made. There are riding camps in several countries, but the one I chose (you can see it at African Horseback Safari), has won awards and promises adventure for experienced riders. 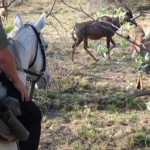 You fly to Johannesburg, then to Maun in Botswana, the gateway to the world’s largest landlocked delta, and from there you take a small six-seat charter into this nearly uninhabited watery desert. The Okavanga Delta begins a thousand miles upstream in Angola, and when the Okavanga River floods, it sweeps tons of water downstream to spread out over 5,791 square miles of flat dry sandy soil. Lakes and ponds swell. Islands form. It becomes a haven for wildlife—with tens of thousands of elephants, giraffe, kuku, tsessabe antelope, impala, hippos, zebra, wildebeest. In this area, the Macatoo horseback riding camp and its sister, the Macateer camp fourteen kilometeres and two hours distant, are the only occupants of a wildlife concession that covers half a million square acres– almost 800 square miles, and basically untouched by human hands. It must have looked like this 10,000 years ago, with only the whisper of the wind in the grass or the sudden frightened rush of a herd of zebra to disturb the quiet.

This is the land of timeless sunrise and sunset, of animals feeding. As for humans, the vast distances put us in our place—small and insignificant. 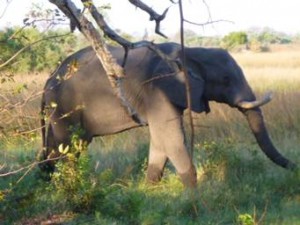 I am awakened in the soft gray African dawn to the tramp and thump of one young elephant tearing at the grass and the hoots of a baboon family that swings through the trees and bounces, sliding and tumbling, down the cloth of my tent roof.

“Good morning, Madam,” says Sopa, as she unzips the mosquito netting and sets down a tray of my morning tea and biscuits. This is pure luxury. I sip tea as I lie, luxuriating, in bed, considering the day to come. Breakfast at 6:30 is followed by a fast four-hour horseback ride during which we splash through knee-high water and gallop across the high ground, stopping to watch herds of elephant and giraffe and buffalo. We’re back at camp by 11:00am. Lunch is at noon and the afternoon free for napping in the heat of the day or talking to the 12 other guests. At 4:00 pm we meet for tea, with cakes and sweets, after which a two-hour, slower ride sets out, mostly walking and trotting this time, to observe the scenery as dusk falls and the animals settle for the night.

Riding six hours a day is hard. If you aren’t a rider (and not everyone on the safari is) or if you want to skip a ride, there are boating trips, game drives, and a helicopter ride (in which we saw our only lion). One of the benefits of this small group of only 12-14 people is having time to grow intimate with other guests. Most are from the United Kingdom. There is Derek, the London cab driver, married to an international libel lawyer, and Sam and Steve, social workers who operate a program for teens at risk, and whose thick Glasgow accents are such that I find myself baffled. 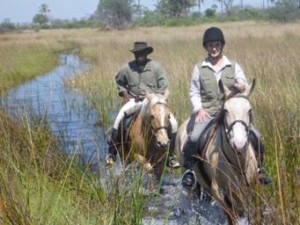 Steve rides up alongside me. “How’r you fainting yrsel?” he asks.

He repeats it to my continued confusion. Finally I ask, “I don’t understand, could  you spell that?”

I burst out laughing.  Oh! “How am I finding myself?”

Ariane, a German PhD economist and horse lover, has difficulty following the fast English conversations at dinner, especially since the words are lost in jokes and bubbling laughter.

It took a few days for me to recognize the most unusual thing is not the elephants tromping and blowing around our tents at night or the baboons bouncing off the cloth roof overhead, not the clear blue sky without even the cobweb of a cloud; not the pure air suffused with the hot, sweet scent of African sage—no, it was the absolute freedom from modern machines:  no cell phone, internet, email, no news of violence, war, distress, discouragement, despair.  There are no paved roads, no trash, no beer cans or plastic bags caught in the brush…and gradually I find my heart lifting (not fainting).  I am flooded with happiness.  Good food, exercise, sleep, no distress:  this was the way I remember feeling as a child. 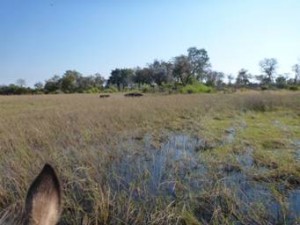 Today we saw two male kudus jousting for domination of the females. We stood a long time watching, and I thought that Sekongo, our guide, was taking photos with my camera, but later I discovered he must have been using someone else’s camera and I have no film of this extraordinary event.

We came across them by accident, as we rounded a hillock, and there on the far side was a small herd of females and right in front of us, no more than 30 yards away, the two battling males. Seeing us on our horses, they stood apart, heads high, examining us: (friends? enemies? threats?) A moment passed and by some indefineable signal they turned back to each other and charged, butting horns and heads.

We watched. Clearly there are kudu rules to battle. They stand eye to eye, lower their heads, and throw themselves forward, butting heads, antlers tangled and feet scrabbling so hard in the dusty earth that they dig a little pit, in which their forelegs sink. It is at this pit that they fight.

Rule 2: Butt only with heads. Shifting to attach at the shoulder or ribs is not allowed.

Rule 3:  When one buck withdraws the other in courtly agreement likewise pulls back. They stand a moment to catch their breath, eyeing each other or looking about, and by a mutual signal charge at each other again. 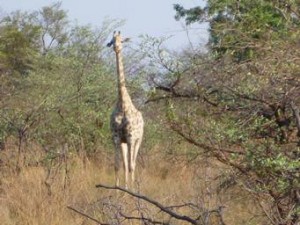 It takes some time to determine the winner, which in this case the old kudo is victorious. The  young contender trots off after a while, wagging his tail in humiliated but unharmed defeat. But no sooner has he withdrawn from the conflict than a second young contender trots up, eyes lively, and challenges the elder buck for mastery of the herd. The old one is tired now. He is breathing hard, but he has no choice but to accept the challenge. He has just spent twenty minutes of hard combat on the first challenger, and the time will come when he will be defeated merely by the constancy of strife.

We ride on. I’m thinking about old age and how inexorable this displacement of life is, everywhere in the food chain:  you are a youngster one moment, reach your full prime, and then spend years defending your vulnerable position at the top. At some point you will be defeated – by age itself, though you like to  think it’s by the stronger youthful generation; and then you wander off, a supernumerary watching the young bucks who have grabbed your territory. In this last stage you are only waiting to be taken by a lion or an accident.  Is it any different in the human realm? 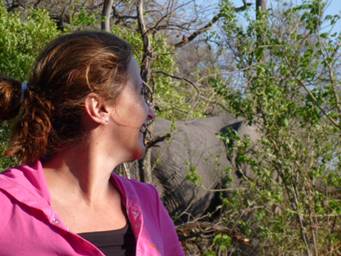 On my last morning’s ride, we spotted the black hulks of a small herd of elephants browsing in a wooded copse. We rode along the tree line. The horses jiggled, ears pointed, heads up; they liked to observe the game as well. Suddenly one big bull elephant broke from the trees and walked toward us, his huge ears waving. An elephant waves his ears for two reasons—to cool himself off, or to act as a warning. He made himself bigger to warn away a threat.

An elephant cannot run or trot but only walk. Yet, at a walk he can reach 35 km an hour and as this one headed toward us, his trunk lifted, ears spread wide, and our guide turned his horse. “Run,” he called to us, breaking into a canter, and we took off, galloping away as fast as the horses could run. The big bull chased after us, lumbering at a surprisingly swift speed. I am crouched over my horse’s neck, laughing and joyous as my gallant little gelding gives an extra burst of speed, racing over the savannah, hell-bent for leather, and through a patch of high water that sprays water and dirt up in my face. Soon we are far away.

We pull up and turn to look behind. No one has fallen off. No one been hurt. We are all exhilarated from the run. The elephant stands in the high grass, belly-high to his gigantic bulk, lifts his trunk and trumpets in triumph. It is his declaration at having run us off, at having protected his cows and calves.

This was my last ride, a suitable end. That afternoon I got on the land cruiser and bounce back to the tiny dirt landing field that’s been cut in the bush. I will fly to Maun, and thence to Johannesburg and later fly another 20 hours back to Washington and what we call civilization. It is only now that I recognize that Africa has gotten under my skin, and not only the comforts of this environmentally-aware safari, with its lectures, and not only the elephants or giraffe or zebra or hippos, or the horses racing through high water, the hot scent of African air, nor our formal seated dinners with white linen on a table set out on the sand, or my pleasure in talking to the others, or the helicopter ride, or my insights into the family life of Sekongo or Bongwa, our two magnificent horse guides—(the Botswana people are worthy of an article themselves, for their courtesy and kindness, for a good-hearted serenity I don’t see much of at home.)

No, it is the absolute freedom from modern life: for one week I’ve had no daily news of violence, war or politics, no wails of distress, discouragement and despair. For one week I saw no paved roads, no permanent buildings, no jet trails overhead, and only the occasional sound of a motor. This was an illusion, I admit, for all food had to be flown in from South Africa (Botswana is poor), and all our amenities for rider and horse. Outside the Okavanga Delta plans are being made to dam the Okavanga River for electricity, and wars are being plotted, and people are filled with restless longings and heartache. But, for one brief time I experienced the earth as when it was first visited by our ancient ancestors, an Eden unchanged for thousands on thousands of years.