From Restaurant to Reef: An Oyster’s Journey 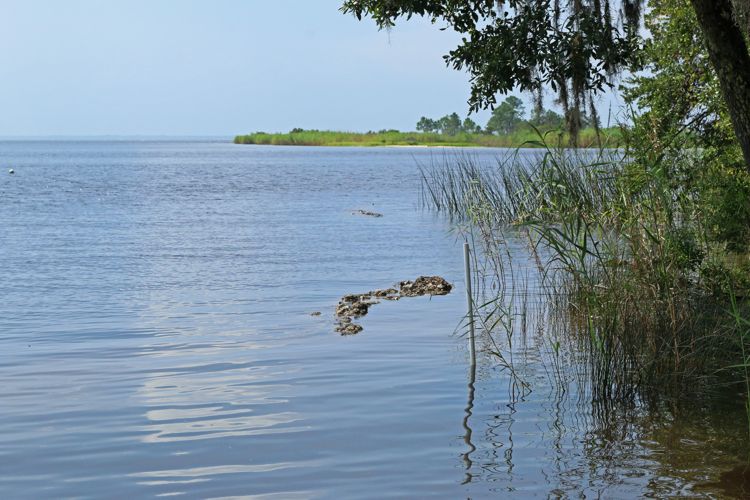 I sat at a high table at Half Shell Oyster House in Destin, Florida. Christmas music played softly in the background, complemented by fir boughs adorned with red bows on each table. General Manager Stephen Vallette sat across from me as we discussed details of the Choctawhatchee Basin Alliance (CBA) oyster shell pickup at his restaurant.

Soon the head chef came out of the kitchen, a large plate, full of oysters, balanced carefully on his raised hand. Setting it down in front of me, he explained each of the four styles: their award-winning Oyster Orleans, Charbroiled Oysters, Oysters Bienville and Oysters Rockefeller, complete with two pieces of garlic toast in the center. After taking photos of the dish from every conceivable angle, I dove in, my tiny fork ferrying each one of the flavorful morsels to my lips.

It all starts with an oyster shell. 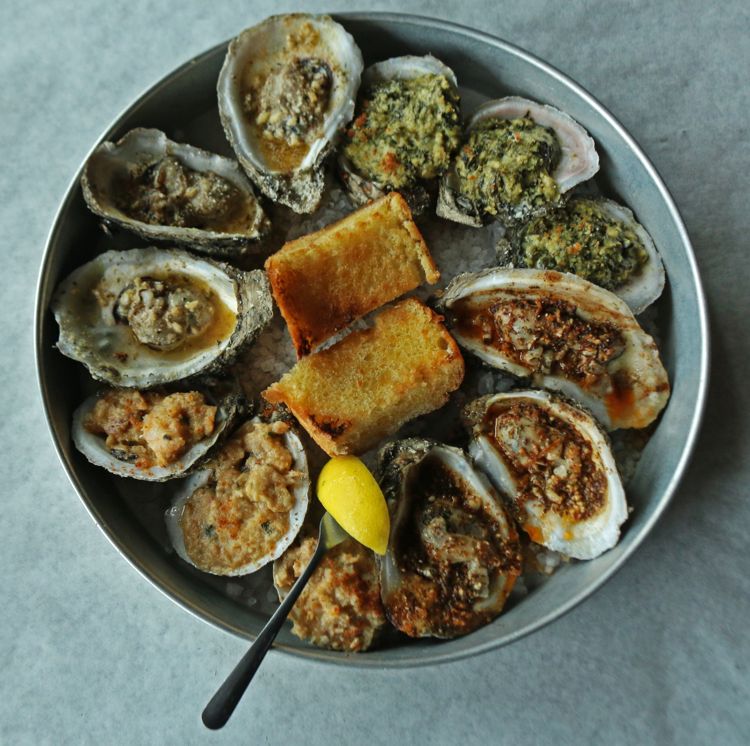 As members of the CBA oyster shell recycling program, the Half Shell staff shuck their oysters differently than neighboring eating establishments. When the top halves of the oysters are removed, they are carefully placed in waiting blue bins outside the restaurant that are provided by CBA just for this purpose. Two or three times per week, the CBA staff and AmeriCorps members hitch a large trailer to the back of a Ford truck, and rumble along the coastal thoroughfares to empty participating restaurants’ oyster shell bins and haul their contents back to CBA’s property in South Walton. After drying in the sun for three to six months — a popular part of the process for the black and turkey vultures in the area — the shells are ready for bagging. In Okaloosa and Walton counties, 13 restaurants donate their shells to CBA’s reef building program.

I’m a little embarrassed to admit this, but it took me over six months into my employment with CBA to come out to a bagging event — a delay that was entirely premeditated. I like to do outdoor, physical activities, but the few times I had picked up an oyster bag I marveled at how heavy it felt, and I didn’t want to embarrass myself in front my co-workers, huffing and puffing while trying to work alongside them. 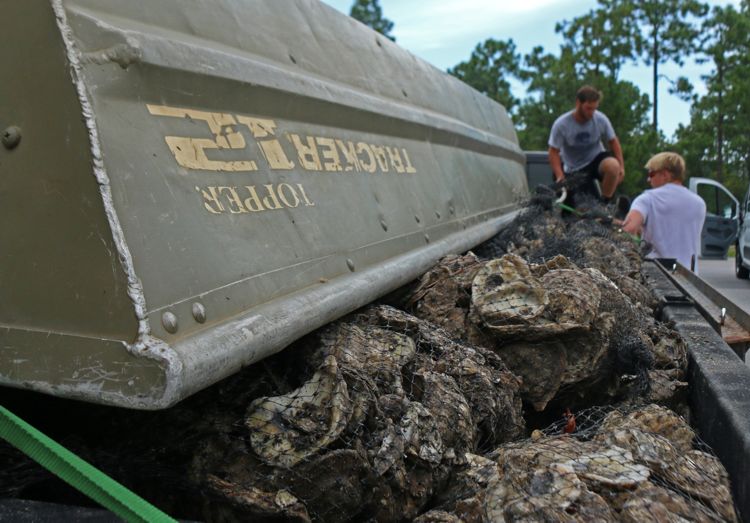 I felt a little silly as I searched my closet for gloves and a winter hat. Sure, it was December, but I live in Florida. Only the weekend before, I had been sweating in temperatures near 80 degrees, and now I was layering on long underwear, sweatshirts and jackets. The sun may have been shining, but my car thermometer read 37 degrees. No matter — it was time to build an oyster reef!

The team had already begun by the time I pulled up to the oyster shell pile. My boss Alison and her daughter Caity were there, as were two of our part-time ecology technicians Jamie and LaTrell, our restoration coordinator Rachel and three volunteers, including two kids. Make no mistake, those kids knew their stuff and busily cut bags and readied the shell for pouring.

To create shell bags as efficiently as possible, the volunteers formed an assembly line. In my group, Alison shoveled shells into a waiting bucket; I attached a mesh bag to the long, vertical plastic form that acted as a funnel, and Caity dumped the shells into the form and then tied the bag shut. Physically, my work was probably the least taxing, but I still felt the pull of my arm and shoulder muscles as the two hours flew by. After years of studying coastal ecology, moving projects forward from behind a desk and writing about restoring ecosystems, I was finally building part of a brand-new habitat with my own two hands. 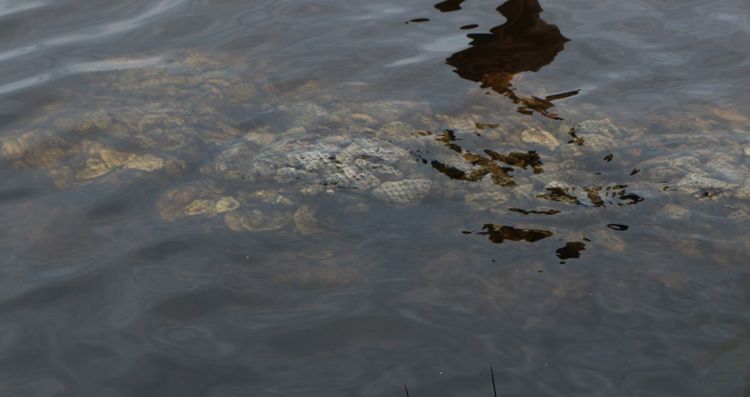 Most CBA reef building in 2017 centered around a 1,700-foot structure in Alaqua Bayou, an Eglin Air Force Base property. Erosion had become a serious issue, and the reef — CBA’s longest to date — would break wave energy before it smashed against the shore. By planting additional smooth cordgrass, the sediment would be held in place once more. And the new reef would provide hard substrate for baby oysters, known as spat, to grow upon, increasing the area’s oyster population. As each oyster can filter up to 50 gallons of water per day, an increase in oysters means a subsequent increase in water quality.

The area used to have larger oyster populations. Unfortunately, instead of realizing how important the shell piles were to the entire oyster life cycle, people mined the shell for use in agricultural and construction projects. Left with little to hold on to, the spat died, and the oyster population went into a steep decline. Each reef we build at CBA is an effort to reduce shoreline erosion and increase the numbers of these unique shellfish. As an added benefit, other creatures such as rays, sport fish and crabs will live in the new reef or the newly planted cordgrass.

To complete the Alaqua reef, we needed volunteers — a lot of volunteers. Volunteers who wouldn’t mind getting dirty and sweaty and wet as they bagged the oysters and then waded into the bay to place them. While we had a wide variety of amazing volunteer groups, from concerned citizens and students to military members and churchgoers, my favorites were the Northwest Florida State College Raiders baseball players. 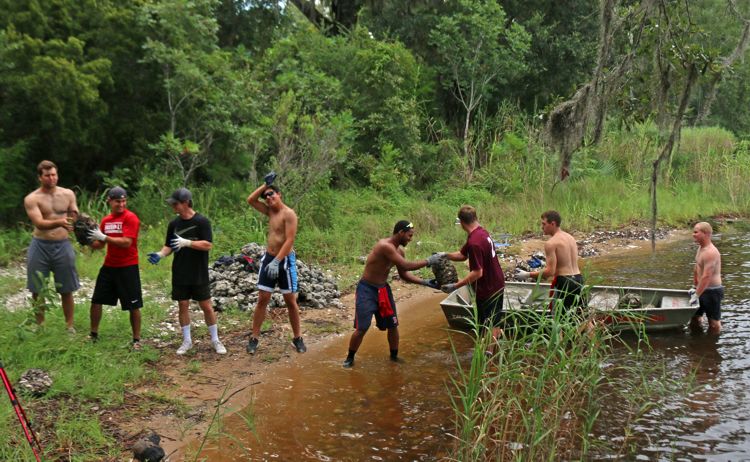 The team gathered together on a sunny Friday morning for both team-building and community service. Standing at our headquarters, they faced a mountain of oyster shells with a mixture of jokes and jocularity. Over the next three hours, the team members would bag enough shell to fill an entire trailer, which they then used to build a new section of oyster reef in Alaqua Bayou.

After Rachel gave a brief explanation of bagging procedures, the Raiders set to work. They talked and laughed as they bagged, and the clinking of shells reverberated across the South Walton campus. Though it was hot, the baseball team members worked efficiently, putting those long hours of regular athletic practice toward a completely different aim. Once enough shell had been bagged, the team loaded it on the CBA trailer to move to the bayou build site. Forming a line, the guys passed the bags from one to another, creating another pile of bags before following instructions on how to place them in the water. The reef is built using a pyramid-like structure; the very top is meant to show above the high-tide line and provide a resting place for a range of native bird species.

One by one, the players waded into the warm water of Choctawhatchee Bay to help with the bag placement, wiggling their toes in the sandy bottom of the bayou. The nearby coastline was full of beautiful, bright, leafed-out trees mixed with the deep evergreen of pine trees. A chattering belted kingfisher darted across the calm surface of the bayou while a brown pelican bobbed on the surface nearby.

If I had to guess, I’d say the team spent about 50 percent of their energy bagging and 50 percent of their energy being teenagers. Most had stripped to the waist before wading into the water, but others were surprisingly skittish, standing on their tiptoes to avoid dragging their shorts in the waves, cowering when splashed and shrieking at a particularly large grasshopper at the edge of the bayou they swore was a spider. Turns out some of them had only moved to Florida in recent weeks. Many admitted that this reef building was their first physical interaction with a watery landscape outside of the beach.

I know bayous can be nerve-wracking if you aren’t used to them. While the baseball players had found a grasshopper, there are a lot of spiders, plus crabs and mosquitoes and yellow flies. The bayou’s bottom may be sandy, but patches of muck suck at your feet, and aquatic plants and seagrass can tickle calves, feeling like sharks to particularly imaginative waders.

But there are also majestic egrets and herons, spreading their wide wings to take to the air in search of shallows in which to stalk their prey. The wrinkled bark and twisted trunks of live oaks, many sporting drips of Spanish moss from their boughs, grow along the edge of the water, while more pine and palmettos create the interior of this particular system.

For the more suburban boys, their lack of interaction with the natural world is tragically ordinary.

First given a name by Richard Louv in his seminal book Last Child in the Woods, young people in particular are suffering from “nature deficit disorder,” which simply means that “all of us, especially children, are spending more time indoors, which makes us feel alienated from nature and perhaps more vulnerable to negative moods or reduced attention span.” Through infrequent exposure, nature becomes foreign, uncomfortable and scary. Without routine trips to the outdoors, people become much like the early colonists, apt to see wilderness as something grotesque, to be conquered into neat fields and suburbia.

To their credit, the student athletes threw themselves into the physicality of the reef building, despite the misgivings of the more nervous teammates. Tossing the shell bags high in the air, they rapidly emptied the trailer and moved so many of the bags so quickly that Rachel, from her perch atop the recently completed section of reef, had to shout for them to stop. She and Riley, one of CBA’s ecology technicians, took each bag and placed it along pre-permitted lines, building a wide base-layer before creating the rough pyramid shape. By the end of the morning, the Raiders had created an entirely new ecosystem at the fastest pace of any group of volunteers before or since.

Through extensive community partnership and dedicated staff and volunteers, the Alaqua Bayou reef, now complete, will provide habitat and erosion prevention for years into the future. In addition to preventing oyster shells from ending up in landfill sites, the restaurant recycling program unites locals from Okaloosa and Walton counties in an ongoing effort to enhance the swimmable, fishable waters of beautiful Choctawhatchee Bay.

Part of this article originally appeared in “Building an Oyster Reef in the Choctawhatchee Bay” by Erika Zambello in a Nicholas School of the Environment at Duke University blog post.