Hippotherapy: Horses and the Human Condition

To the plains Indians, horses stood for wealth and power. To ancient Arabian peoples, the horse was grace incarnate, born from the blowing of a southerly wind. Across millennia, horses have gifted their riders with strength, speed and new athleticism. Although no longer a ubiquitous force in contemporary culture, horses make no less of an impression today. Legends such as Alexander the Great and Bucephalus are ageless testaments to the extraordinary feats people are capable of when coupled with the brimming power and intuitive emotion of the horse. Current day racetrack stars like Barbaro continue to elicit public outpourings of wonder, love and awe. Interestingly, the same such characteristics that have always made horses such fearless, willing partners on the battlefield and racetrack also make them the perfect instrument for another, entirely different kind of partnership known as hippotherapy. 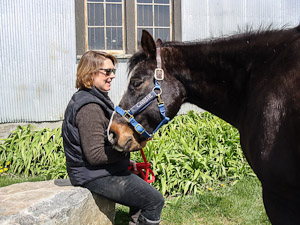 The History of Hippotherapy

Pioneered in Germany in the 1960s, hippotherapy originally relied on the rider’s passive response to a horse’s movement to aid in regaining physical strength and mobility. The horse’s natural gait causes movement of the rider’s legs and hips that simulates walking, thereby encouraging the rider’s muscle development, posture and balance. Further benefits of the practice, such as improved cognition and speech, were discovered in the 1980s when a specific therapeutic technique was by Jan Spink, a therapist and instructor who would go on to establish therapeutic riding programs throughout the United States. Integrating the fields of occupational therapy, speech therapy, special education and rehabilitation, the practice was formally accepted and legitimized with the establishment of the American Hippotherapy Association (AHA) in 1992.

Today, equine-assisted therapy – the umbrella term that encapsulates all horse-related therapeutic activities occurring both on and off the animals – is used to treat patients with physical, developmental and psychological disabilities. In the United States, approximately 700 organizations offer some kind of therapeutic riding. One hundred and fifty of those are able to offer the medical practice of hippotherapy, which can only be provided by an AHA-accredited organization to a patient with a physician’s prescription. Other forms of equine-assisted therapy often focus on finding solutions for emotional, behavioral and cognitive issues rather than concentrating on the patient’s physical difficulties.

In most cases, the therapy team is comprised of a certified instructor, a horse, and two side-walkers to direct the horse and physically stabilize the patient if necessary. Lessons range from gentle assisted walking, to stationary exercises while mounted, to improvement of able-bodied riding skills such as trotting, cantering and jumping. All horses must be thoroughly trained and supremely obedient, gentle and patient.

The potent, loving bond forged between humans and animals is not a new phenomenon. Horses have been domesticated for more than 4,000 years, and dogs, one of our first and finest pets, have been by our side for more than nine millennia. The mollifying, restorative effect these relationships have on our well-being is not new, either. In fact, using animals to treat all kinds of physical and psychological disorders is a well-worn practice: C.J. Tissot, French doctor and author of the book Medical and Surgical Gymnastics, wrote of the health related benefits of horseback riding in the 18th century! 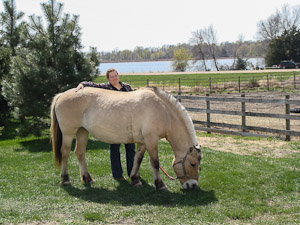 Recent studies now reveal that animals have a diminishing effect on cortisol – the hormone responsible for stress – and keeping a pet has been shown to decrease blood pressure, boost immunity and relieve loneliness. Victims of traumatic incidents and patients with certain behavioral disabilities also appear to greatly benefit from animal companionship. Organizations connecting horses, dogs, cats, rabbits and even birds with people in need of the placating power of animals are now ubiquitous. Additionally, in the United States, approximately 63 percent of all households own at least one pet.

For some, the animal-human connection goes even deeper. Temple Grandin, the autistic animal scientist responsible for designing the United States’ humane slaughter house facilities and author of the book Animals Make Us Human, writes of the innate connection between autistic people and animals: “Normal people stop seeing the details that make up the big picture and become oblivious in a way animals and autistic people aren’t.” In other words, both animals and autistic individuals are sensitive to new smells, sounds, sights and sensations that are often overlooked by other people, linking them in a special kind of understanding. Speech can also be a struggle for autistic people, making the body language used by animals easier to interpret and relate to in a non-stressful way.

The Horse as an Instrument of Therapy 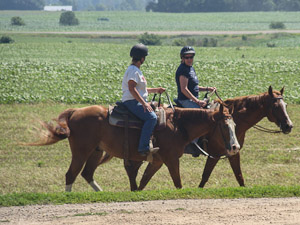 Horses were first domesticated on the vast and ancient grasslands of the Eurasian steppes. Evidence suggests they were raised for meat and milk prior to becoming work animals and instruments of war. Although the exact date of man’s first ride is uncertain, the moment and the experience surely changed the course of history. For thousands of years, horses have carried the likes of Ghengis Khan and Napoleon into battle. They’ve tilled our land, carried pioneers west and even skyrocketed to divinity status for cultures such as the American Plains Indians. Horses have been trusted with both our greatest conquests and our humblest needs.

The act of riding itself is good therapy, too. Riding requires acute focus and allows patients to escape from stressful, repetitive thought patterns or traumatic memories. Many trainers describe horses as a mirror, capable of reflecting even the most well-concealed emotions. It is imperative a rider learn composure and adopt an attitude of calm attentiveness in order to achieve success with a horse. For these reasons, Grandin writes in Animals in Translation, horses are particularly good therapy for troubled teenagers:

A horse is a huge responsibility, so any teenage kid who’s looking after a horse is developing good character. But for another, riding a horse isn’t what it looks like: it isn’t a person sitting in a saddle telling the horse what to do by yanking on the reins. Real riding is a lot like ballroom dancing or figure skating. It’s a relationship.

“They are powerful, but also gentle and forgiving, and they provide an entire body connection, with all senses engaged, and all body parts moving,” she said in an interview. “With a 1200-pound animal, the rider naturally is in the moment. A rider cannot let their thoughts drift elsewhere as the horse – and riding – require full attention in mind and body.”

Veterans and Hippotherapy: A New Role for the Warhorse 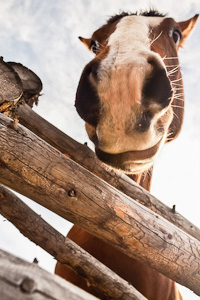 Veterans who have endured severe wartime trauma and emotional distress are one of the newest patient groups to benefit from equine-assisted therapy, claiming that riding provides patients with a refuge of peacefulness and a renewed sense of control over their lives. At Bjorklund’s Freedom Farm, a group of six female veterans return every week to spend time with horses. The routine provides a respite from the difficulties of living with Post Traumatic Stress Disorder (PTSD), allowing them to form positive relationships and focus on the healing process. As one Gulf War veteran at the farm put it:

For the first time since coming home, we feel safe, supported and listened to without judgment. We learn to trust each other here, forming unique bonds between our sisters and our horses. By sharing our experiences, we learn from each other, growing and healing our way home.

The confidence these women learn from their horses actively engages the healing process and is vital to overcoming the shackles of PTSD. Bjorklund believes the skills they learn while riding help them go out and reclaim life’s pleasures.

“For all, learning to feel all of their body again, as a whole, is a powerful experience,” she said. “The confidence from their time with the horses carries over to other things; helping with friendships outside of Freedom Farm and getting the confidence to seek employment.” For these women, riding bolsters a growing sense of mindfulness and focus and an ability to shape and mold their own lives.

What the Research Says About Hippotherapy 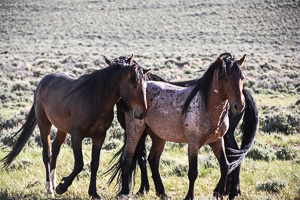 Although quantifiable results from hippotherapy have been difficult to determine, many doctors, caregivers and parents agree the practice brings patients improved focus, self-confidence, mobility, strength and a new degree of emotional stability. In 1998, a study in Developmental Medicine & Child Neurology researched the effects of hippotherapy on the motor function of five children with spastic cerebral palsy. In all cases, the children showed increased stride length and ease of motion. Similar results were recorded in a study on patients with multiple sclerosis, published in Journal of Neurological and Physical Therapy in 2007. The strongest scientific evidence of the healing power of equine-assisted therapy came from Dr. Daniel Bluestone of the University of California, San Francisco. Bluestone compared MRI scans of patients’ brains taken over the course of treatment. He discovered that neurological pathways between the cerebellum and the motor system were being steadily strengthened and rewired, improving motor function as they were repaired.

Quantifiable results are hard to amass across such a diverse array of patients with a variety of emotional and physical issues.  Most compelling are the testimonials provided by patients and caregivers. One anonymous side walker – someone who accompanies and supports those receiving treatment – explains that for one of her patients, riding is a way to reconnect with who she was before the accident that changed her life. Before her accident, the patient loved horses and, despite new physical and mental challenges, she still does. Riding for her is a time to smile, tell jokes, enjoy herself and remember. “She speaks of her past without anguish,” says her side walker. “She’s proud of what she was once able to do and what she’s able to do today, too.”

The long-standing connection between humans and horses tells of the special bond between the two species. Although many doctors still debate the calculable medical benefits of equine-assisted therapy, the number of hippotherapy barns continues to boom. For parents and caregivers with loved ones in therapy, the evidence rings loud and clear; one side walker recalled the time her largely mute and emotionally troubled autistic patient leaned down from the saddle to rub and stroke his horse. “He smiled a great big smile and said, ‘What a good boy you are, what a good boy.’”

Photos are copyright protected and may not be used without permission. Photos 1, 2 and 3 are courtesy of Molly Marquand. Photos 4 and 5 are courtesy of Jonmikel and Kathryn Pardo.