The photography and text filling the pages of In Predatory Light: Lions and Tigers and Polar Bears (Merrell, 2013) haunt like the dissolving edges of a gripping dream. This new book by art and conservation power couple Cyril Christo and Marie Wilkinson pays tribute to a shocking truth: On the cusps of this fragile planet, the great predators are dying. They take with them something so intrinsic to humanity we may not see it anymore.

Today's dominant Western society may have long ago dispensed with the animist beliefs of our ancestors, but the guardian spirits of our past still inhabit our deepest consciousness. We need "the others", the four-footed ones, and the life force that they embody more than ever. (13) 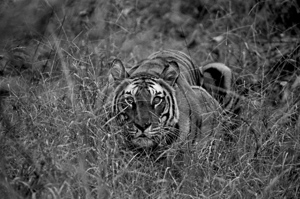 Partners in life and in work, Christo and Wilkinson traveled to remote areas of the globe still inhabited by these endangered animals, capturing their presence in stunning black and white photography and incantatory prose. As in Rainer Maria Rilke's 4th elegy: "And somewhere lions still roam, all unaware / In being magnificent, of any weakness." This weakness is us, the human predator. This is a critical point in time to save them – or to witness their annihilation. In Predatory Light demands that we pay attention, not for the sake of the animals only, but for ourselves. We need them more than we know.

In visiting these places, Christo and Wilkinson spent time with the indigenous peoples who have shared the land for millennia with these competing predators. They bring us the stories to which they listened, the stories we long for, illustrating "...the inexpressible bond between man and beast, the super-sensory realities that are still the hallmark of much that is most wondrous in life" (19). On a trip to the Kalahari in Botswana, Christo and Wilkinson stayed with a traditional hunter-gatherer community of Bushmen.

There we were transfixed by tales of medicine men who climbed the threads to God's village far above the earth, and at night we witnessed the famed trance dance, possibly the oldest human ritual on earth.

One of the elders, Bom, told of a lion roaring repeatedly after a dance as the sun rose. The men went out and found its tracks in the desert sands, the thick paw indentations becoming human footprints that led to a neighboring Bushman town. As the writers point out, it is not for us who have forgotten this primordial bond to explain it away as myth. An essay in the book contributed by anthropologist-writer Elizabeth Marshall Thomas speaks of the truce between the Ju/Wa Bushmen of the Kalahari and the lion, based on the mutual respect between the two predatory species. The tribespeople, she writes, "...would not speak the names of gods or lions in the day, for fear of disturbing them" (63). 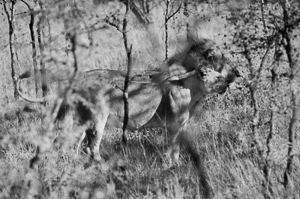 In 2012, while on their journey, the authors heard a most wonderful story of lions and men as they meandered toward the Chyulu Hills of Southern Kenya. Their guide, Koni, of the Waliangulu tribe, recounted what happened to his grandfather in a tale that evokes the Roman story of the runaway slave Androcles. One evening after a day of hunting, as Koni's grandfather settled down to sleep, he heard a lion's strange roaring. A while later, he woke to hot breath on his skin. Above him stood a male lion holding out his paw. Impaled in the paw was a huge thorn. The man took out his knife and removed it, and the lion vanished into the bush. A few days later, Koni's grandfather felt eyes staring at him, saw the same lion moving away, but turning to look at the man as if inviting him to follow. He did, and the lion led him to a clearing where a young, freshly killed giraffe lay untouched. Koni's grandfather understood, as the lion slipped into the shadows, that the giraffe was a gift from the great beast he had saved.

Fewer than 20,000 lions now inhabit all of Africa, a 90 percent population loss in half a century. Lions are killed for sport, for trophies to adorn walls of homes far from the mysteries of interspecies connection that is vital to the human spirit. The authors quote famed natural-science writer Loren Eiseley from his essay The Ghost Continent: "One does not meet oneself until one catches the reflection from an eye other than human."

The photos in the book are not National Geographic-style color images of the animals frozen in time. The black and whites are grainy, sometimes blurred with the motions of ferocity and play that we are privileged to witness. Nothing else can evoke these creatures' souls, the quickening of the pulse we feel seeing these great beings in wild landscapes where they are so utterly at home and where we no longer belong.

How else to tell a story so sad, with glimmers of hope and the agony of relentless loss?

Those who kill lions, tigers, polar bears and the earth's other predators are the destroyers of time, place and memory...We should be extremely concerned about the future of the human species if we were to become the only surviving predator. (15)

There are a few bright spots in the litany of death. The Maasai, who once proved their manhood by killing lions, now help protect them. There are international conservation efforts to preserve biological diversity, such as the Nagoya Protocol (2010), and some media attention spotlighting the issues. But man does not relinquish his blood lust for his rival predators easily. In a recent opinion piece for National Geographic Online, Melissa Simpson, director of Safari Club International, strongly argues against the petition sent to the U.S. Fish and Wildlife Service to add lions to the list of endangered species. This addition would prohibit bringing dead trophy lions into the United States. The petition has not yet been decided. 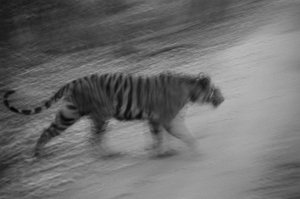 The plight of the tiger is even more foreboding. Fewer than 3,200 still live in the wild, a mote of their historical population and range. Gone are the Bali tiger and the Caspian tiger that once roamed the steppes from Kazakhstan to Iran. Tigers are hunted for sport and have been poached to the brink of extinction for their parts. Tiger bones, eyes, whiskers, penises are harvested for sale in China for "medicinal" uses, including for strength, to treat illness and as an aphrodisiac.

Could there be karmic repercussions to our participation in the extermination of these species? In Predatory Light relates the story told in the book The Spell of the Tiger by Sy Montgomery of what happened after the death of the last Javan tiger. Disasters took place directly afterward, including a volcano eruption, a plane crash that killed dozens of Indonesian pilgrims, and the sudden deaths of the crown prince and his mother. Montgomery is quoted commenting that these incidents "were widely attributed by the people of Indonesia to the shooting of the tiger and the extinction of the Javan subspecies" (73).

The karmic toll is unprovable, but there are scars of irrevocable loss: "Killing a tiger may or may not have consequences, but the world at large knows that if we do not save [...] the remaining species of tiger, we may have lost the path that saves humanity from itself" (73).

In the stunning language of the book, the tiger is described as "a being that moves between the visible and the invisible as few other creatures on this planet can" (71). Christo and Wilkinson tell of their visit to the Terai district of Bardiya National Park in western Nepal. Only a handful of Bengal tigers remain in this vast area in the Himalayan foothills, and they had little hope of seeing one. It was there that Wilkinson learned of a forest goddess who protected the Bardiya. She made an offering of oranges, prayer, and the smoke of a candle to bring her plea to the deity. Later that day, they saw their first tiger, not once but twice. Epiphany or apparition, the majestic animal showed itself before vanishing into the green veil of the jungle. 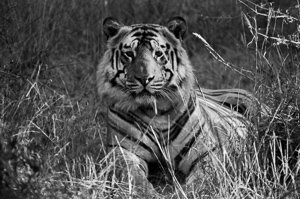 The book then reveres and mourns the last in the trinity of critically endangered predators: the polar bear. Not only is it the totemic animal of global warming activism, the ice bear is, in its essence, the guardian on the furthest edge of the world. "It was a four-footed predator, yes," says the prose, "but also a ghost affirming the loneliness of infinities that haunted our journey on this planet" (105). The Inuit people of the northern lands know and respect the polar bear as an ensouled being; white people they refer to as "the people who change nature" (108). As Loren Eiseley wrote in his essay The Star Thrower, repeating what the Eskimo told him, "Most of all we fear the secret doings of the heedless ones among ourselves" (105).

Polar bears are still trophy hunted, though the arctic safari can cost upward of $40,000. It is marketed as "the toughest hunt on earth," where a high-powered rifle will annihilate the giant as it lumbers silently across the ice.

Threatened by global warming as it shrinks their hunting range, polar bears struggle to adapt. Research has shown some change in foraging strategy: Bears are switching from a diet of seal pups to land-based Arctic geese and their eggs, caribou, berries and mushrooms. Some are starving. As if hearing the whispers from time, polar bears, which diverged as a species from the Alaskan brown bear roughly 250,000 years ago, are now interbreeding again with their brunette cousins.

Documentary filmmaker John Houston spent years among the Inuit, learning and recording their culture. He writes of their ancestral prophecy of the earth's burning that he heard from an esteemed elder:

I've heard from my grandfather that the earth and the sky can be changed by people. So I've heard. Now the animals with fur, if it turned out they had been burned, that would cause our sky and earth to change...The birds, polar bears, caribou, seal, all those with hair: he said they must not be burned, as this can cause damage to the land and the sky. This has been heard since who knows when. (144) 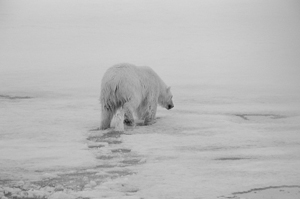 Recently, the Inuit of Baffin Island received a notice from the health center with a warning not to eat polar bear meat. It was filled with toxins and considered polluted. Through biomagnification, persistent organic pollutants (POPs) pass along the Arctic food chain from phytoplankton to the seals the top predator eats. These are industrial chemicals such as biphenyls and benzenes, pesticides, as well as coal plant emissions of mercury, arsenic and dioxins. They end up in the polar bear at a toxic, burning dose.

For the Inuit, the polar bear is the most powerful of the animal spirit guides. In shamanic tradition, if Nanurluk, the white spirit bear, found an apprentice worthy, she would consume him. The apprentice then would be reborn, part human and part animal, with the vision to see the things that are hidden and to heal those that are broken.

How to convey the sadness and magnitude of the loss of the great predators? Is it our destiny to become the loneliest hunters? Christo and Wilkinson write:

We have to wonder if we have left the savage state ourselves, for we kill mercilessly, out of caprice, out of misplace notions of manhood. Our century entirely depends on our coming to terms with the shadow side of our psyche. All the great predators have been considered to be both royal and vermin, at once icons of majesty and ruthless predators. Perhaps it is time that we see them as the beneficiaries of a supreme freedom that we no longer possess, and if we were to exterminate them, our freedom, too, with have dissolved into the mists. (32)

In Predatory Light: Lions, Tigers and Polar Bears awakens us to the truth of what we are losing. It is a photographic poem, a cry, a prayer.

To buy a copy of this touching book, visit Amazon.