In Search of a Common Wilderness

On the morning of January 19, 2017, I found myself in the Tararua Mountains on New Zealand’s North Island, in a gale. I had been in New Zealand for two months as part of a four-month hiking traverse of the entire country on the newly minted Te Araroa Trail. By 8 a.m. I was caught atop an open tussock ridge, gusts at 70 mph, snow ripping through the summer air. The baleful wind threw me off my feet with relentless force and in the ensuing surges of adrenaline I screamed-cursed-howled in fear at the implacable sky. The elements on that ridge peeled my consciousness back to a feral monotone: “Keep moving, keep breathing, find cover.” Eight hours later, I sat on a wooden bench in the town of Waikanae, sifting through a plastic container of just-purchased donut holes, having walked out of the mountains, and through forest reserves, tree farms, sheep paddocks, quarries and neighborhoods to get there. All in a day’s work, right?

Walking a country encourages a wide-angle perception of landscape. It took three days of slogging through Auckland’s sprawl to arrive at the city center; it takes two hours to drive that same distance. Relative to faster modes of transport, walking is like a sensory all-you-can-eat buffet. In a car, the world is perceived visually; on foot, the world is perceived through all five senses — walkers can feel the morning dew soak through their shoes, hear the hedgehog grapple with the tent fly at 2 a.m., smell the detergent on the clean clothes of approaching day hikers. Walking in New Zealand, the more I observed, the more I began to doubt the boundaries between urban, suburban, and wild. At a snail’s pace, there is plenty of nature to observe in a city, and plenty of humanity to observe in the thickest woods. Most conservation areas in New Zealand (and the world over) demarcate clear boundaries between what is “wild” and what is not, what is “native” and what is not. To me, this perspective seems dangerously simplistic. 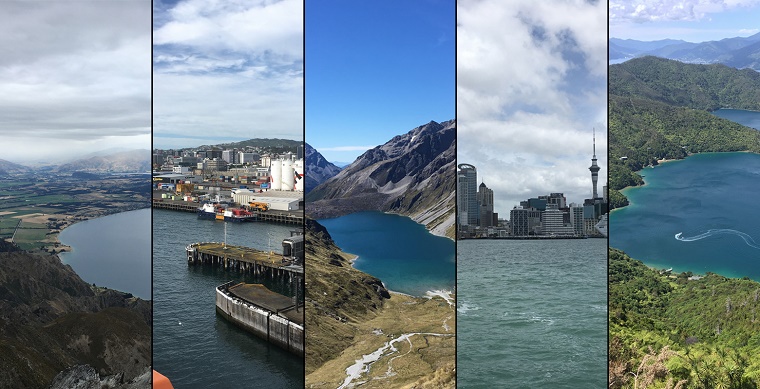 I have always been interested in how we define wilderness. The word carries such cultural weight, especially in the United States. In fact, it’s almost impossible to use the term productively because “wilderness” means so many different things to people. In the bible, wilderness is a desert, a place of exile, hostile to humans. To European settlers coming to America, wilderness was a blank canvas, an opportunity, a vast potential. To Thoreau, Muir and Abbey, wilderness was a temple, a sacred realm. Humankind has stubbornly tried to define wilderness through the centuries, but always as a place outside, or beyond, our daily lives. Ask an American today what wilderness means to him or her, and you might hear words like “untouched,” “raw,” “frontier,” “unknown.” These words, and the romantic idea of wilderness as a place of spiritual renewal, are the cornerstones of New Zealand’s tourism marketing. Before my hike, when I would tell people where I was going, the response would generally be, “New Zealand! I’ve always wanted to go there! So beautiful, so Middle Earth!” No one had any specifics; but there was an unshakable feeling that the landscape in New Zealand was almost mythic in its grandeur. Alongside vague imagery of heroic ridgelines, hiking trails themselves are some of the most notorious flag-bearers of wilderness as a sacred temple. A hiking trail is a wilderness narrative, told by the people who construct it. At my most cynical, I would call it a savage gash in the land, disguised as a “nature experience.” On a better day, I would say that a hiking trail brings us into a natural realm we too often disregard, allowing us the chance to experience the heart-swelling richness of an ecosystem at work. Either way, much like the tourist imagery of New Zealand, a hiking trail is man-made. 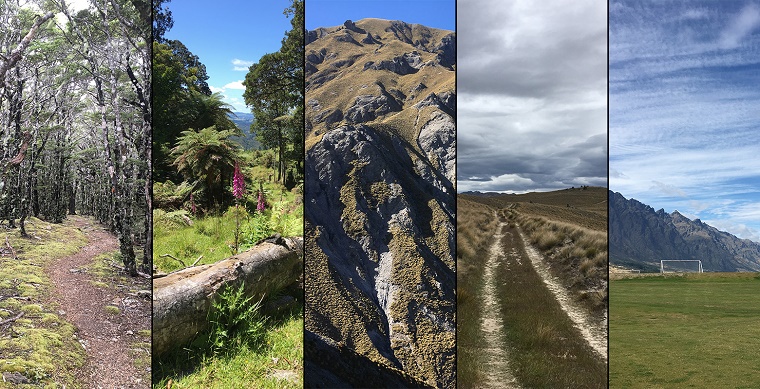 The wild ethos of New Zealand we’ve been presented is a half-truth; before doing any research, I’d expected a country of endless snow-capped peaks, fissured valleys, and rivers so clean no self-respecting water filter would dare get close. And there are indeed mountains and glaciers, fjords and forests that rip the breath out of you. But there are also suburbs and cities, dairy farms and sheepfolds, ranch lands and tree farms. Te Araroa passes through all these landscapes — a broad spectrum of human influence. In doing so, it highlights the fact that most of New Zealand is already a revised landscape; there is very little that is “untouched” there. Many of the Kiwis (the local people, not the endangered birds, with whom, incidentally, I never had the chance to speak) I met harped on the distinction between native flora/fauna and invasive flora/fauna. Because of its island geography, New Zealand is covered mostly by endemic species. About 80 percent of all plants and 70 percent of all birds in New Zealand can be found nowhere else in the world. In July 2016, then-prime minister John Key launched a program to eradicate all non-native predators by 2050. However, the rats, stoats, weasels and possums, identified as targets, can’t hold a candle to the country’s deadliest invasive species: Homo sapiens. Since the arrival of the Maori some 1,000 years ago, and the additional surge of Europeans in the 1800s, humans have played the critical role in exterminating local flora and fauna. Since our arrival, 50 percent of native New Zealand birds have gone extinct and forest cover has decreased by 55 percent. So while “Predator Free 2050” is an admirable program, its refusal to identify humans as a “predator” seems willfully naïve. 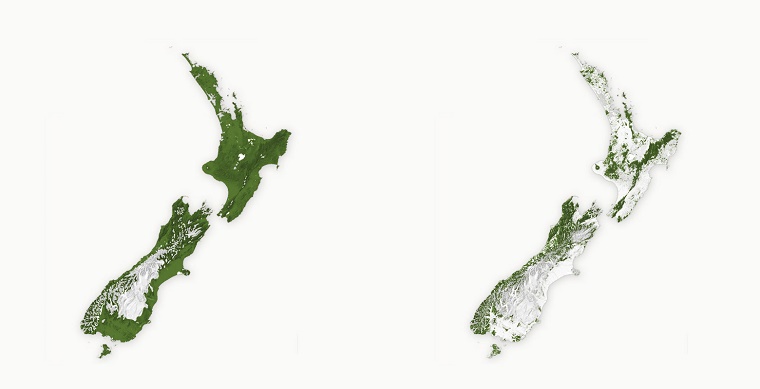 This initiative is a good example of how the traditional definition of wilderness, as a place uninhabited and pristine, can be a huge detriment to conservation efforts. After all, if we think of wilderness as a place “untouched by human hands,” then to preserve it, we necessarily can’t live, work or interact with it. By presenting the success of humankind and the success of the natural world as diametrically opposite, we stall productive conversations about preservation. Writers such as Bill Cronon, Michael Pollan and Robert MacFarlane have made this argument before. To them, the first step for conservationists should be to stop thinking of wilderness as existing someplace else, and instead start looking for it inside human life cycles. They talk of the window planter, the sidewalk tree, the back garden, and the median of an interstate as places just as vitally wild as Yosemite or the Taiga. While the hedge in my backyard may lack the elemental poetry of a giant sequoia, both provide an equally vital scaffold for animal life. And, importantly, the hedge is a place where humankind and the natural world overlap, interact, and share. On that storm-shellacked ridge in the Tararuas, the snowy wind hitting me like a wet sledgehammer, and my mind cornered in animalistic fear, I stumbled across a cheerfully painted sign marking a trail junction. I thought, “What kind of sick joke is this?” But even in the quintessential harshness, the unforgiving “wilderness” of that environment, there was evidence of human work. 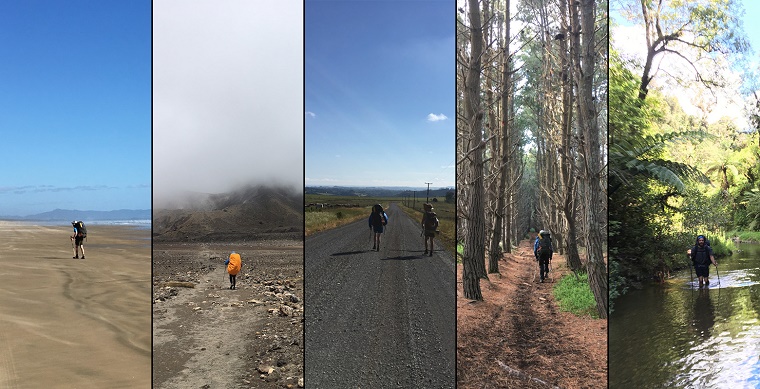 In New Zealand, I walked through the mythic grandeur I’d heard about, and it all bore traces of the people who had used the land before me. Yet that didn’t ruin my experience by any means. Words like “purity” and “untarnished” are enemies of those hoping to engage with the natural world, because if that’s what you’re looking for, you won’t find it. And that’s OK by me. I agree with the conservationists who say that in order to preserve wilderness, we have to put ourselves back into the equation and acknowledge the immense role we play in shaping natural landscapes. Like all species on Earth, we are greedy for surplus — the point is that we are in fact like all species on Earth, not separate from them. Half of New Zealand’s native bird species, a third of its native plants and a quarter of its people live in Auckland. The trail revealed fluid edges between wilderness and settlement — and maybe our cities should reflect that. Perhaps if we think of our urban areas as widely populated ecosystems, or our backyards as a place of communal exchange between one species and others, we could start a new dialogue about preservation and wilderness.

I’m not sure what that would look or sound like. But one recent event in New Zealand could be a possible starting point. During my hike, I spent five days paddling a canoe down the Whanganui River. It was thrilling to be off my feet, and the barrels of food I stowed as cargo provided me with nightly feasts beyond any backpacker’s carrying capacity. The Whanganui is an important river to the local Maori Iwi (tribes) and, in March 2017, after 140 years of negotiations, the Whanganui was granted the legal status of a human being. According to the ruling, the river can now, “represent its own interests and advocate on its own behalf.” How this will work is still up for interpretation; for now, the river will be championed by two elected spokespeople. Granting the Whanganui such a status is one way of putting humans and nature on level(ish) footing in the preservation dialogue. The Maori say, “I am the river and the river is me.” To see the river as having a distinct humanity is to acknowledge that the success of its life and that of our own lives are fundamentally linked. A few weeks later, a court in India gave the same status to the Ganges River, citing New Zealand’s pioneering case. How might our actions change if other geologic features, other species even, had the right to a fair trial? I think I’ll have to go on a few more hikes to figure that out.

Photos are owned by Dan Hawkins, copyright protected, and may not be reproduced without permission.