In Search of Blue Tang

When Disney’s blockbuster Finding Dory hit theaters in June of 2016, it brought an endearing fish back into the spotlight — blue tang. However, with the release of the movie, there was an outcry from conservationists concerned that the anthropomorphized character would spike blue tang sales and drive their depletion in the wild.

The idea that a popular movie for children could influence a global market like the marine aquarium fish trade so fascinated a group of National Geographic Young Explorers that we came together to ask: What is the real life story of Dory? Through a generous Collaboration Grant from National Geographic, we set out to follow the path of the blue tang from reef to tank.

The aquarium industry is a large one. Annual fish sales total over $500 million. If the associated gear is included, such as tanks and filters, estimates for the industry’s value range between $7 and $15 billion per year. And those numbers continue to grow as the middle class expands in countries across the globe.

In order to document the export side of this business, I headed to Southeast Asia with my team this summer, where 86 percent of saltwater aquarium fish are harvested. We aimed to ground truth reports that the majority of fish are caught with cyanide and to explore the complex supply chain these fish go through before reaching their final destination.

Our work proved to be quite challenging. We spent two fruitless weeks searching for the blue tang in Bali, the main export hub in Indonesia, but did not witness a single blue tang being harvested. Their population was more depleted than we anticipated. 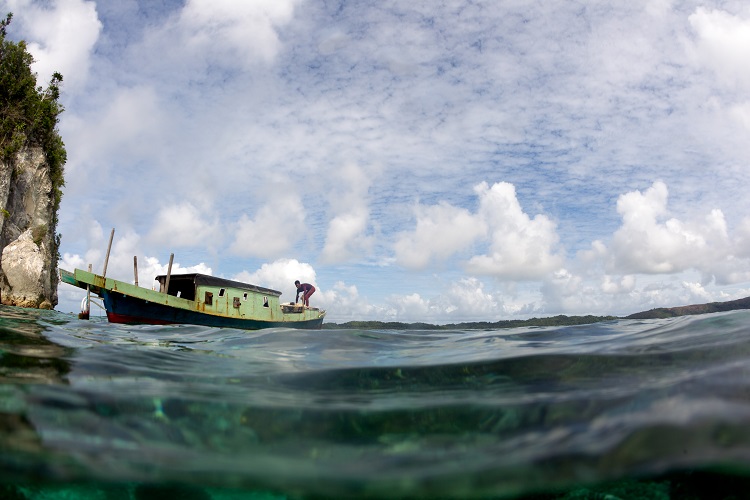 The rest of my team needed to depart, but I had one final chance to document a blue tang harvest. To do it, I had to travel farther afield to Central Sulawesi. A local NGO, the Indonesian Nature Foundation, let a middleman know I would be coming.

In the aquarium trade, middlemen generally source fish from several harvesters and then sell the fish at an increased price to either another middleman or an exporter. This middleman, Sarly, sourced fish from seven harvesters. He agreed to accompany me from his home on Banggai Island in Central Sulawesi to Toropot Island, where his fishers lived.

We reached Toropot after a six-hour boat ride, and I met Rasdin and his family. They are part of an indigenous group collectively known as the Sama-Bajau, which has subgroups spread across Malaysia, the Philippines and Indonesia; these peoples are often referred to as “Sea Nomads” or “Sea Gypsies.”

Until recent times, the Sama-Bajau lived almost exclusively in boats with nuclear family units of five or six individuals. However, due to a combination of market pressures and forced government settlement, most groups now live in stilt houses over the water or homes at the water’s edge.

I was to join Rasdin and Sarly on a harvesting trip the next morning.

I awoke early to find Rasdin’s wife, Suriata, preparing “tea” (hot water, powdered milk and sugar). I sipped mine sitting on the plank floor a few feet from where I had slept, the ocean below glowing softly through the cracks.

Rasdin and Sarly were busy gathering all the fishing gear: diving fins, masks, small barrier nets with fine mesh, hookah lines (narrow yellow and green plastic tubes that connect the oxygen produced by an onboard compressor to a diver underwater), white Styrofoam coolers, diesel in plastic jugs, a wrench and a hammer. There was no evidence of cyanide or its associated paraphernalia. 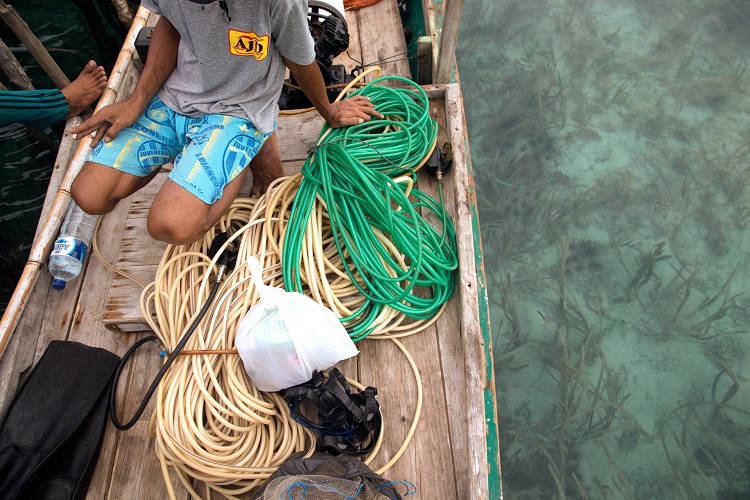 With the gear loaded into Rasdin’s wooden boat, we began motoring to the nearest reef that was promising for blue tang. As we passed the island that shelters Toropot, we were exposed us to the open ocean and the water became choppy.

We traveled for an hour to reach the first reef. I sealed my camera in its underwater housing, and Rasdin and I donned our fins and masks. We splashed into the water and Sarly handed me my camera and hookah line. I have dived on tanks nearly a hundred times but never on hookah - my nerves made my stomach churn. I put my head underwater and noticed it was a bit murky.

Rasdin set off as soon as he hit the water. He swam so fast it was difficult for me to keep up, especially since I was trying not to snag the hookah line with my bulky camera. By the time I found Rasdin via his bubbles, he’d already reached the bottom of the seafloor, about 30 feet down.

My camera was very buoyant, I had no weight belt and I was concerned about pulling too hard on the hookah line as I struggled to reach the bottom.

Once I did, I saw Rasdin had set his small net around a coral head and was attempting to flush an emperor angelfish into it. It struggled against the mesh until Rasdin closed his pink-gloved hand around its royal blue and yellow-striped body. The fish wriggled as he held it up for me to see. This was an expensive fish — though he would receive only about $2, the emperor angelfish would eventually retail for between $100 and $200.

As I watched him, I became acutely aware that it was getting harder for me to breathe through the hookah line. The oxygen was no longer flowing freely. As I paddled breathlessly toward the surface, I recalled interviews in which several harvesters said they did not want their sons entering the trade because of how risky it can be. The danger now felt very real to me.

We were in shallow waters this day, but Rasdin and his fellow fishers regularly dive to 120 feet. At that depth, equipment failures can easily result in air embolisms, and it would take days to reach a decompression chamber. I wondered what it would be like to depend on such dangerous work to support my family. Relief and a profound feeling of respect swept over me, as I emerged and took a sweet gulp of air.

We moved on to the next reef. This one had crystal clear water and beautiful, intact coral. We swam so shallow I did not need to be on hookah. Almost immediately after we hopped in, Rasdin zeroed in on a blue tang.

The moment I’d come halfway around the world to document was finally happening. 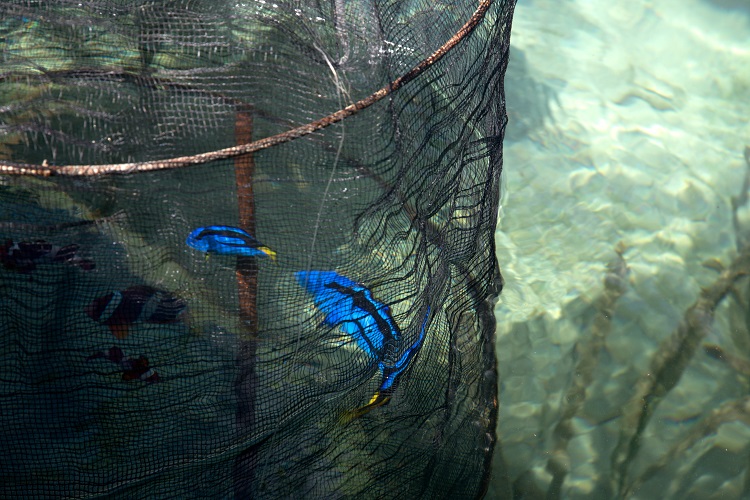 I watched as he surrounded the coral bommie that contained the fish, but this little one had wedged itself into a tight crevice. After several minutes prodding with a coral fragment, Rasdin grabbed a metal poker from the boat and shoved it into the bommie. The little blue tang shot out of its hiding place and launched itself into the barrier net. Rasdin gently grabbed the small fish, earning another dollar for the day.

The blue tang was officially on the first step of a 13,000-mile journey from its Indo-Pacific home to its final destination. As I watched, I wondered how this fragile fish would make it all that way.

While in Bali, our team learned that if the fish are handled properly at each step of the supply chain, the majority of them will in fact survive the journey. We also learned that as an increasing number of fishers become proficient with barrier nets, cyanide use, though still widespread, is likely no longer as high as 90% of fish entering the US — the most recent estimate given by NOAA in 2008.

Despite these positive steps, cyanide use must be eliminated entirely and more research needs to be conducted to understand what constitutes sustainable harvest rates for specific aquarium species. With over 1,800 different species in the trade, much work remains to ensure the industry is managed responsibly and that it can continue providing reliable income for locals like Rasdin and Sarly.

Stay tuned for a comprehensive interactive map detailing the journey of these fish, as well as a mini-documentary currently in production. Our next step is to document the import side of the trade and the hobbyists who call these fish their pets.

Also, if you found this article interesting, GO VOTE for Shannon and her team, who were nominated as one of 10 National Geographic Explorers of the Year for 2017 for their work. Voting ends December 16, 2016.

Photos are owned by Shannon Switzer Swanson, copyright protected, and may not be reproduced without permission.