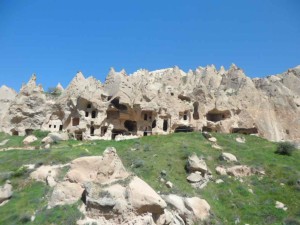 The lunar landscape of Cappadocia, a historical region in central Turkey, is truly otherworldly. It makes you stop and think, “Where the heck am I?” It is a place where humans and natural beauty have coexisted for millennia, renowned for its fairy chimneys, underground cities and Byzantine rock churches. These structures carved out of the soft volcanic rock thousands of years ago provide lessons for environmentally sustainable design today.

Cappadocia is a semi-arid plateau located in Turkey’s Central Anatolian Region, primarily in the province of Nevşehir. Cappadocia’s ethereal landscapes were formed by the eruption of three volcanoes (Erciyes, Hasan and Melendiz) that covered the region with ash and lava over the course of millions of years. The lava created a layer of soft rock called tuff and a layer of hard basalt on top of the tuff. Over the years, much of the tuff has eroded away, leaving valleys and fairy chimneys capped with basalt. This soft tuff is easily carved, and Cappadocia’s inhabitants took advantage of this to create houses, churches and underground cities out of the rock.

In the Bronze Age, Cappadocia was the heartland of the Hittites, whose capital of Hattuşa lies on the Kızılırmak River, less than 200 km north of Cappadocia. After the fall of the Hittites, Cappadocia passed hands between the Persians, Alexander the Great, and his successors, the Armenians and the Romans. It was during the Roman period that Cappadocia was used by early Christians as a haven from persecution. After 300 AD, Cappadocia, particularly Göreme, developed into an important monastic center which nurtured the Cappadocian Fathers – Basil the Great, Gregory of Nazianzus and Gregory of Nyssa – three men crucial to the development of early Christianity. Cappadocia continued to be inhabited from the Byzantine period through the rule of the Seljuks and Ottomans. 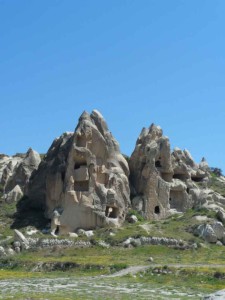 Why were they built? In the past, Cappadocia was located on the border of several empires and saw numerous invasions. Therefore, locals built underground cities to provide temporary shelters from enemies. The underground cities included defensive features such as large stone doors which could only be opened from the inside, holes in the ceiling from which defenders could rain down arrows, stones or boiling oil on invaders, and narrow corridors to restrict enemy movement.

How were they built? Cappadocia’s underground cities are built deep into the earth like giant ant colonies, with multiple levels connected by tunnels. The underground cities were carved out of the soft volcanic tufa, and contained wells, ventilation shafts, chimneys, stables, bedrooms, living rooms, kitchens, dining rooms, temporary graves, churches and even wineries. The larger cities had hundreds of rooms, all connected by tunnels and galleries. If the community grew, the city could be expanded by carving new corridors and rooms deeper into the earth.

We recently visited Kaymaklı Underground City, located 20 km south of Nevşehir, Turkey. This city in particular has eight floors where as many as 5000 people once lived. Today, only four floors are open for the public to see. The first floor of Kaymaklı was used mostly as a stable (because it was difficult to take animals to lower floors). The lower floors contained storage areas, communal kitchens and living rooms. The city was sustained by air shafts which provided ventilation and functioned as wells. Some of these wells were disconnected from the surface to prevent enemies from poisoning the water. The city was lit and warmed by linseed oil lamps, which were placed in carved hollows on the walls of tunnels and rooms. However, heating the city was not a priority because temperatures were consistent year around.

How are they sustainable? The underground dwellings of Cappadocia were built mostly out of necessity. However, there are many advantages to building underground:

While energy efficiency wasn’t Cappadocians’ primary reason for building underground, we can learn from their example today. Today, there are even more advantages of living underground: 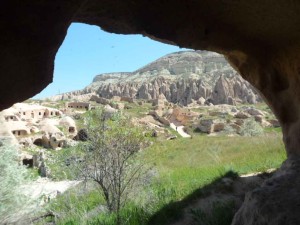 The disadvantages of underground living include risk of flooding and high rates of moisture if improperly designed.

How were they built? Cappadocian rock houses were carved out of fairy chimneys and the soft tufa on the edges of valleys. These structures were often supplemented with local, natural materials like cut-stone blocks. This stone was easy to cut when first quarried, but hardened quickly after touching the air. House plans consisted of small rooms located around a central hall. The houses contained living rooms, kitchens, storage, cellars, and fireplaces. Some had multiple floors which were accessed by stone stairs. Nowadays, many Cappadocian rock houses have been restored and converted for use as cave hotels, restaurants, tour agencies, etc.

How are they sustainable? Carving houses out of existing rock is less disruptive to the environment than building structures from the ground up, as they are in harmony with the natural topography. Building into the rocks along the hillsides of the valleys meant the little available farmland wasn’t wasted on housing. 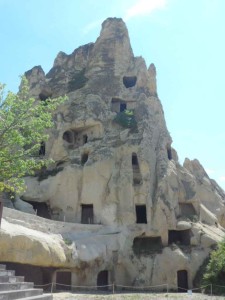 Cappadocians also supplemented their buildings with stone blocks made from the same stone, which they didn’t need to transport far. Using stone causes less erosion and deforestation than using wood for building, particularly important in a semi-arid region like Cappadocia with few trees. Stone structures are also much more durable than wooden ones, and can be lived in for many centuries.

Pigeons have traditionally been used as food and to carry messages. However, in Cappadocia, they served a different purpose.

Cappadocia is one of Turkey’s oldest and most important wine regions and growing grapes and maintaining healthy vineyards demands ample fertilizer. Pigeon droppings would have been the richest fertilizer available to Cappadocians, so people built pigeon houses to collect manure for use in their vineyards. While on our holiday, we were able to sample the results of this process in Avanos and Ürgüp. The wine houses there provided us with quite a bit of the local vintage, including the red, Bogazkere and the whites, Emir and Narince.

How were they built? Pigeon houses were carved out of rock cliffs, usually as rooms of about five-10 square meters. The outer wall contained three to five narrow holes to allow pigeons to enter. The outsides of the pigeon houses were often decorated with elaborate paintings to catch the attention of pigeons and mark who owned the building. The interior rooms contained hollows for birds to lay eggs, as well as poles for birds to roost on. These roost poles provided an easy method for collecting pigeon manure. Typical pigeon houses contained at least 100 pigeons. 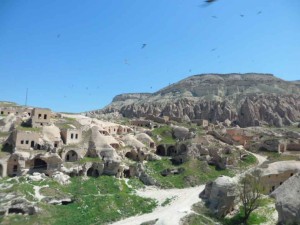 These houses were built high above the ground to deter predators such as mice, weasels and snakes. In addition, the outside of the pigeon houses was covered with a mixture of egg white and lime that becomes hard and slick when dry. Humans were only able to reach the pigeon houses for manure collection through a series of ladders, carved single step stairs, and narrow tunnels.

In later times, it was common for abandoned rock churches and houses to be repurposed as pigeon houses. This was done by filling the windows and entrances of the structures and carving much smaller entrance holes for the pigeons. Examples of these repurposed structures include the Nicephorus Phocas Church in Çavuşin, the Virgin Mary Church in Göreme, and many structures in the Pigeon Valley between Göreme and Üçhisar.

Nowadays, pigeon houses are rarely inhabited because they have been neglected by farmers in favor of chemical fertilizers, or as is often the case, the locals have given up farming entirely in favor of working in the booming tourism industry. However, there is some hope of a revival for pigeon houses. The Göreme Association for Conservation of Cultural and Natural Assets has initiated a project to revitalize pigeon houses. The organization is cleaning and repairing pigeon houses, as well as bringing in wild pigeons from other areas of Turkey. The idea is to collect the pigeon manure, use it as fertilizer in vineyards and gardens, and market the results as organic products to tourists. 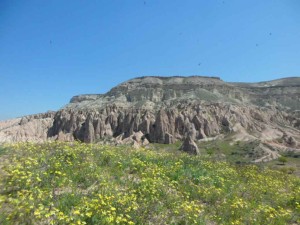 Vernacular architects of the past have provided inspiration for the present, as the past so often does. There is much to learn from these improbable sustainable design pioneers. From the pigeon houses we should think about alternatives to chemical fertilizer and utilizing the resources at hand. Underground cities teach us lessons regarding energy efficiency. Rock houses show us how to build using the natural landscape, as opposed to destroying it. All of these lessons translate into worthy goals for every architect.