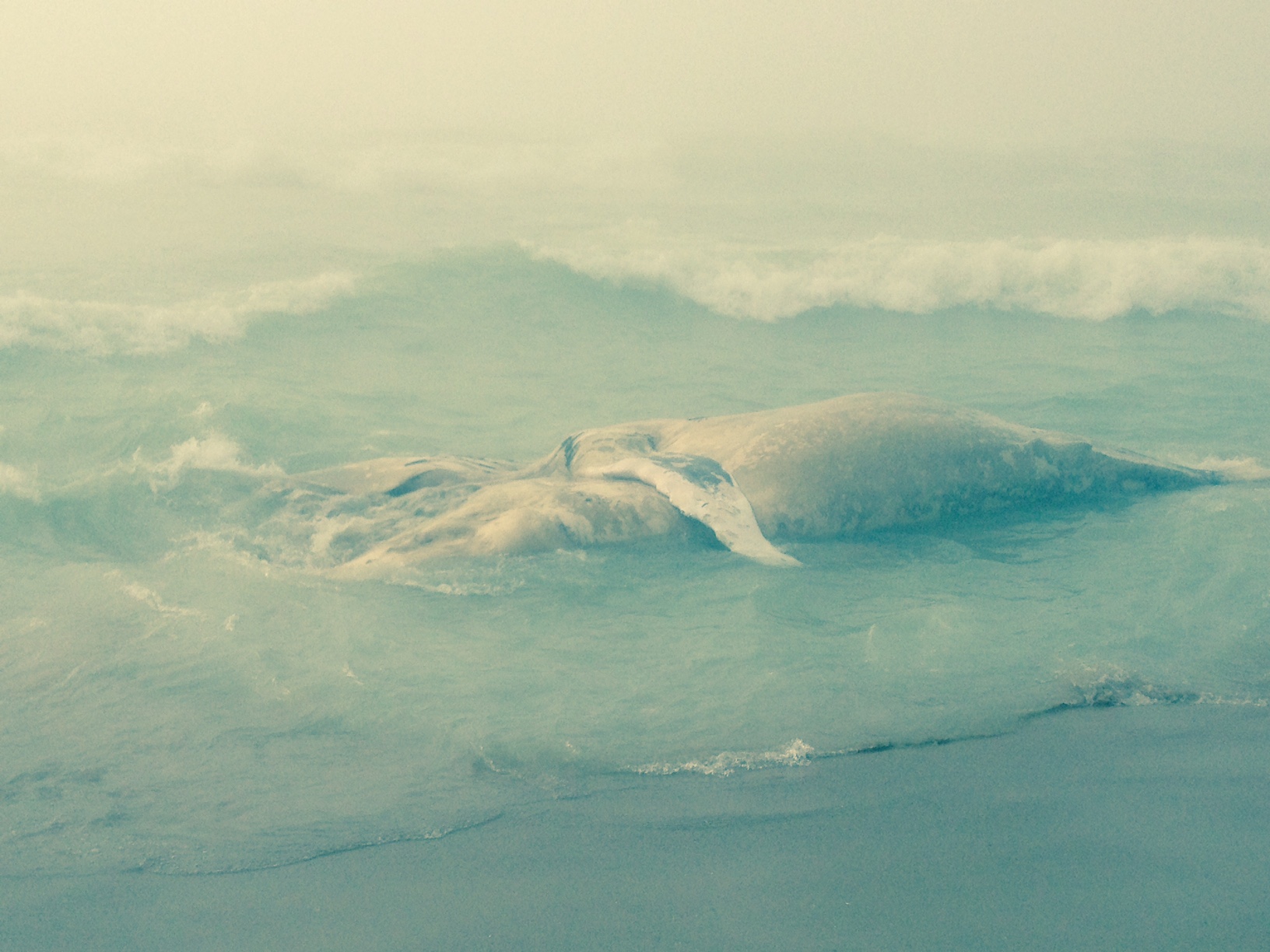 He who fights with monsters should be careful lest he thereby  become a monster. And if thou gaze long into an abyss, the abyss will also gaze into thee.    -       Friedrich Nietzsche

Remote and imperturbable , the lives of whales are somehow enough to match any fantasy humanity can create. They are what we have lost, what we yearn for. They are in some ways the last wild voice calling to the consciousness of terminally civilized humanity, our last contact before we submerge forever in our own manufacture and irretrievably lose the last fragments of our wild selves.     -       Roger Payne, Among Whales

Leviathans, as the Bible described them, were sea monsters, but the term was later used to describe the whales who summon the great body of the sea. Sometimes, their kind even feel as if they have helped move the axis of the earth. We have seen them fly under the waves as if they were a dream, the humpbacks. We hovered above as the giant obelisks glided under us like apparitions from the beginning of time. We know their mass moves thousands of tons of iron and nitrogen through the blood of the ocean, but that is not what moves us. We have seen their spirit, longing for the clouds, breaching through the air as if summoned by a higher choir than this firmament called earth. Joy defying the bounds of gravity. 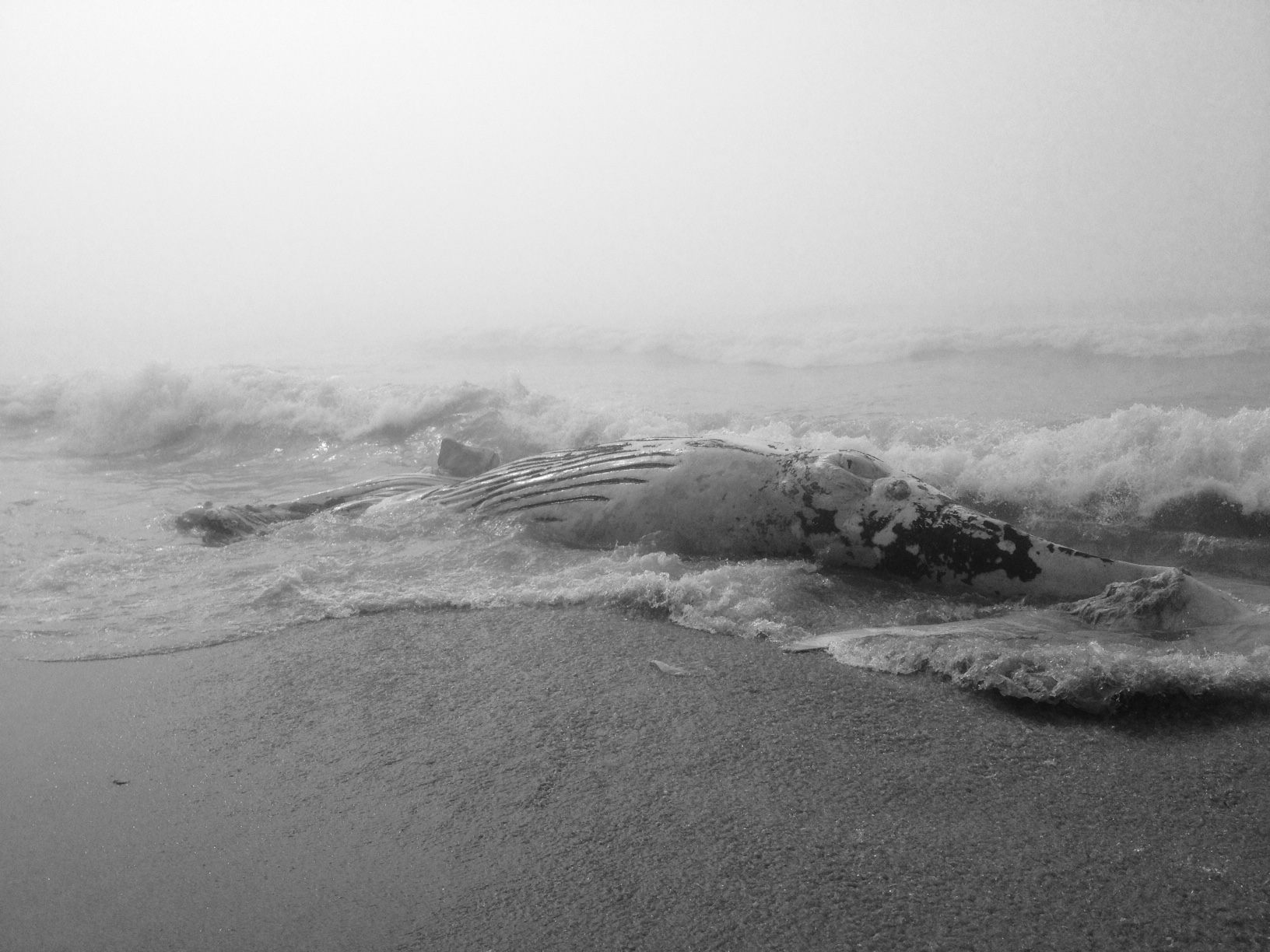 My family came within a few feet of them as they surfaced from the blue, eyeing us as fellow beings who share a common world. Our son Lysander almost touched one surfacing, their eyes locked onto each other like two participants of life locked in a duel of mutual wonder. This kind of encounter is perhaps the purest in the world. No machine interfered. No steel separated us from time and space. The ocean’s blood became the reserve of our minds, cohering with the universe and becoming as liquid and perfect as touching the hand of the ecstatic. For a brief moment, the human side of our humanity was transformed into something beyond flesh, something ethereal in the great triumph of what it means to be alive.

So it came as a tragic reversal of fortune when I saw a humpback lying limply off the Amagansett shore this July, several thousand miles north of its breeding ground in the Caribbean. A young female, not yet a mother, who would never be a mother, scavenged by ocean lice and starting to decompose under the weight of an all too human world. Was she struck by a ship, or had she digested too much plastic, the detritus of a civilization that had suffocated her beyond repair? I saw her dead eye as if it were a miniature earth convulsing under the waves of time. 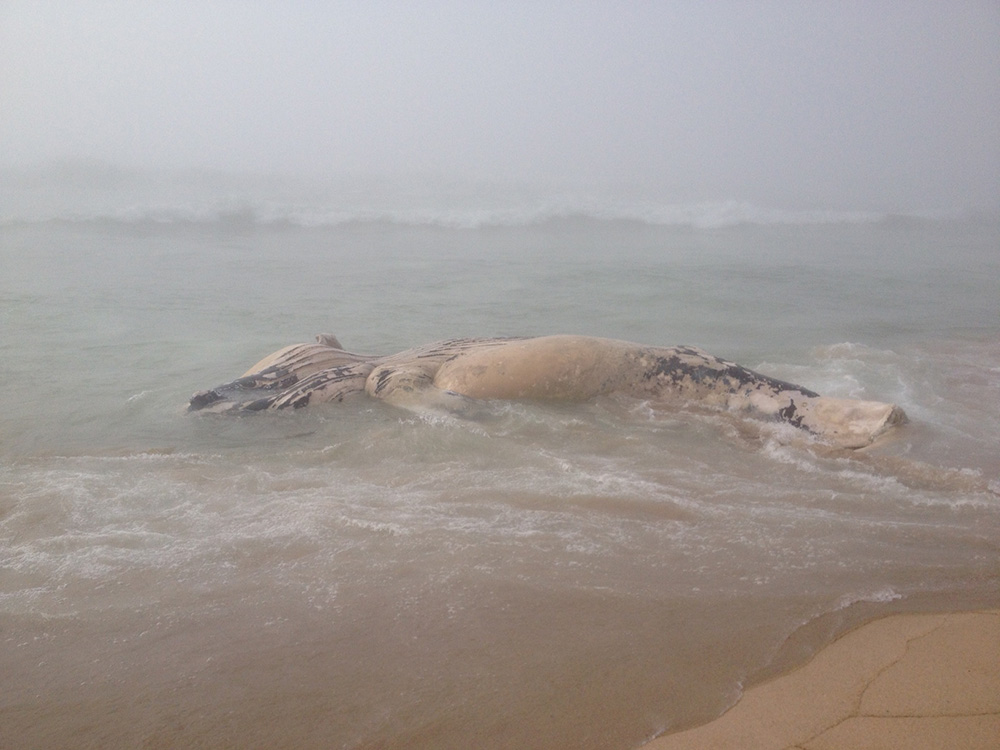 We exult in giantism these days. Giant bridges spanning chasms, satellites teeming with digital streams in the near ocean of outer space, mega-dams that divert the waters of the world. Narcissistic art, operas and spectacles that divert our gaze from the real, raw, remarkable and greater miracle of the organic web that surrounds us. Here was a being, a deity to Indigenous peoples the world over, who would sing no more, whose life was stranded under the veil of a decomposing, all-consuming mist.

The humpbacks have the greatest population of any whale, perhaps 40,000. But in this single being, the world turned a livid grey. I sensed an oceanic change in our relationship to time and space. Arctic fires were burning in Sweden, Yosemite was up in flames, a tiny planet was raging and in the whale’s lifeless eye, a torrent of tears poured its inconsolable gaze. The more sensitive among us might have cried. Some might have convulsed with shame. Some might have pined for the song concentrated in her species’ frame, a song, the humpback’s song, that when first made public in the 60s, some mistook for alien voices.

We may have found a lake capable of harboring life on Mars. The proximity of the humpback and this discovery should give us pause. We are looking for alien life out there when we know life is here, everywhere on earth: the apes, the elephants, the whales. A single microbe on Mars should not have us marvel more. The gaze of an elephant should be cause enough to gasp in utter disbelief at the beauty that covers this world. They know who they are, the other sentient ones. But somehow we have no idea anymore, certainly no more than the cave painters who honored the lions and aurochs of yore. The gaze in the humpback’s lifeless face posits with utter severity, “Human, you walk with disgrace upon an earth you malign. You have but a few breaths left to change the course of evolution.” We have arrived at the time when what we do on this earthly plane will be judged by a higher, invisible dimension, call it karma, call it what you will, the vertical axis that transcends the naked eye, our mind-numbing fixation with inert things, robots, algorithms and skyscrapers. The whale once saw into the depths of a more than earthly time, strange, marauding sentinels of wonder praising the world with resonant cathedrals of sounds beyond our powers to apprehend. For they, the whales, still held the oceans together in symphonic praise. As the birds weave their choral majesty over our terrestrial bed. 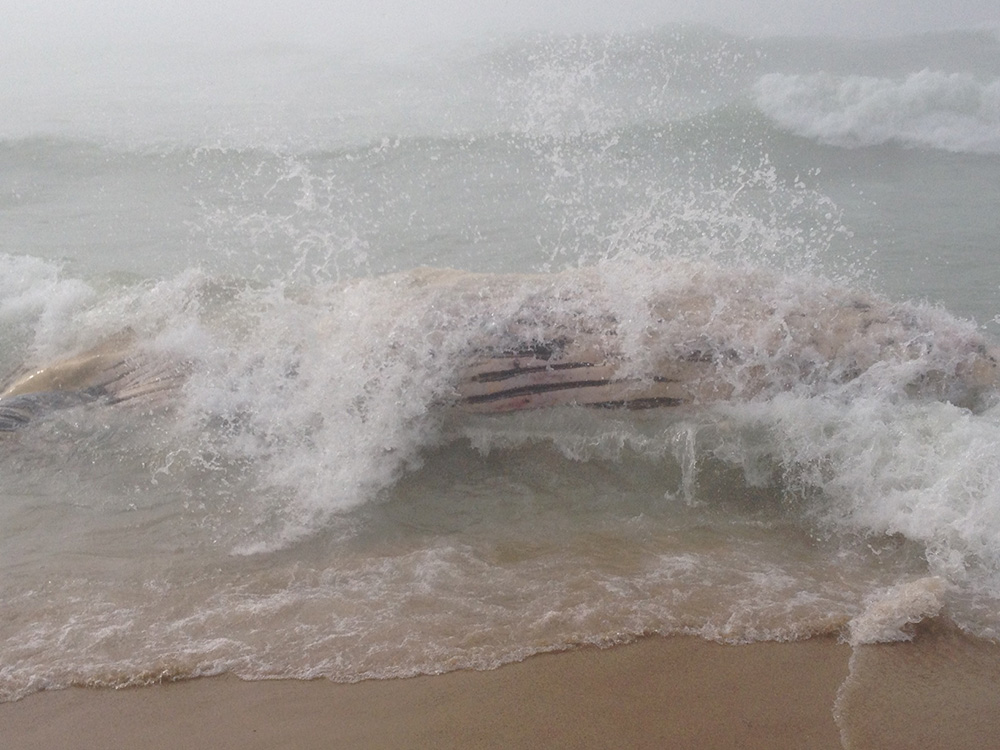 Iceland still destroys whales for the Japanese market. Japan still destroys whales in the name of scientific research. They do not hunt as the Inuit did for thousands of years to survive in the Arctic. Modern man devours to devour, humanity has become Saturn devouring its children. I was told that 2020 will be the point of no return by an Indigenous Elder in the Southwest, a place where one can learn of mysteries impossible to glean in the maximum insecurity prisms of modern megalopolises. The whale’s decaying breath haunted the clouds, haunted the living remnant of a world that was once a paradise, and it spoke of an awakening we must conjure if we are to hold on to anything at all in the firmament of creation.

Five full years ago, Lysander at age eight said, “We have landed on the moon, but we have not landed on earth yet.” It is time we listened to the children, and the whales. Because they are the voices of a more complete season than what the adults of our species have wrought on this earth we should rightly have called Ocean. We walked with more distinction and integrity even 1,000 years ago. We must turn the ship around in less than 10.

All the schools, all the universities of the world cannot teach what shone in the decaying mass of this whale. In its reeking body, with entrails spilling out over the foam of the waves, lay the reckless truth of our kind; here lay the carcass of our intellect. The sunlight cried for the loss of a being that upheld the world. But gulls still shrieked the coming of a new day and the infinite promise of the horizon. 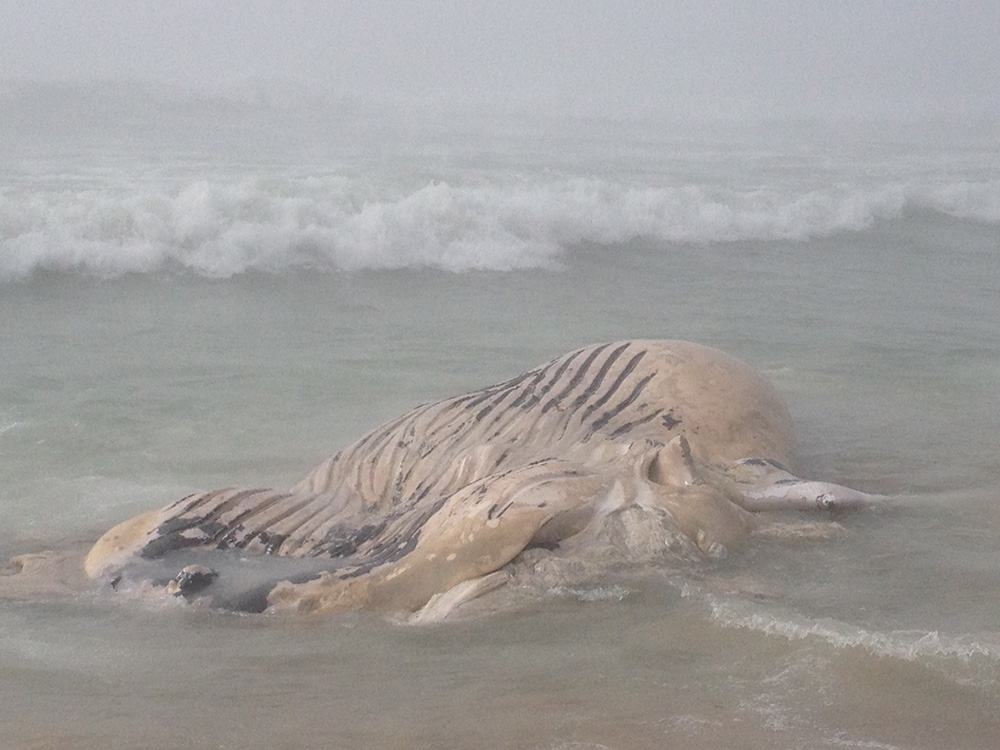 Grey whales touched us so a few years back. Whales one could touch and kiss as if they were members of one’s family. One whale was remembered by a local fisherman, who in turn remembered a story that was handed down from a tribe long since gone. It told of a white grey whale who was rarely seen, born without a tail and who had to twist and turn to propel herself through the water. This whale was white and they called her the “light in the darkness,” a mythic allusion to life and the waters of origin.

The evil that men do, what globalization has wrought, will be measured by our inaction in the world, or perhaps by our love. An Elder once told me that we are living on borrowed time. After encountering this beached dead whale, something colossal stamped itself in my mind. Since I was born, almost 60 percent of all animal life has disappeared! It is the greatest tragedy any of us will ever know, for those of us sensitive enough to listen and take note. The fallacy of the cybernetic world is that it is not alive, numbers do not reach out to touch you, robots do not cry. What embodies the sentient, carnal wisdom of the world is being flayed by mere information, the shallow realm of distraction and, ultimately, destruction. We are being numbed and asphyxiated by an inert world that bears no gaze. If we are not very careful, childhood will only remember the leviathans of the world through videos and photos, and humanity itself will have become the orphan of creation. Indeed children are being numbed by cell phones and video games as experience with the real world, not simulations of the world, is becoming a rarity. If we do not wake up, we will not be able to turn to the ocean and dream of dolphins or ask whales to come and greet us. Quite simply, we will no longer be human.