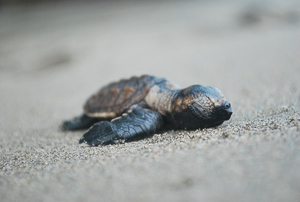 Compared with its neighbors in Central America, El Salvador is a prime case study of the impact of damaged habitat on wildlife. The country has more coffee plantations than native forest, which is estimated to be less than five percent of the original forest cover. Less than three percent of its land and one percent of its ocean are protected. Well-known animals, including jaguars and scarlet macaws, are widely considered extinct within El Salvador’s borders.

In the hopes of reversing the tide of wildlife loss, the government of El Salvador enacted a ban (known in Spanish as a veda) on the consumption, sale, and possession of sea turtles, their eggs, and their parts for purposes other than conservation. As one of the last countries in the region to completely outlaw turtle consumption (Guatemala still allows egg collection), El Salvador’s actions represented a major step in protecting the thousands of sea turtle nests built on its coast each year.

Of the four species that nest here, the majority of nests are from threatened olive ridleys (Lepidochelys olivacea), which account for roughly 90 percent of all nests in El Salvador (more than 10,000 per year). The highest conservation priority in the country, however, is the critically endangered hawksbill (Eretmochelys imbricata), of which there are fewer than 500 adult females along the entire Pacific coast of the Americas. Jiquilisco Bay is one of only two major nesting areas for this turtle in the entire region (the other is Padre Ramos Estuary in Nicaragua), with more than 200 nests per season. The country also has nesting endangered green turtles (Chelonia mydas), with an estimated 200+ nests per year.

Before the ban, El Salvador had an estimated 4,000 people that collected the eggs to sale in markets of major cities like La Libertad and San Salvador, as well as in small towns along the coast. With this many people walking the beaches each night searching for nesting turtles, few nests were left untouched. While these tortugueros (as they’re called in the country) don’t completely depend on this money for survival, this revenue can be a significant amount in communities where the average income is about $200 per month. 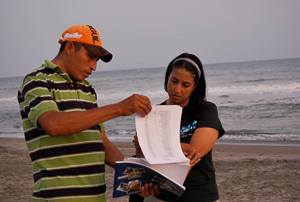 With so many people depending on the profits from selling turtle eggs, the government and conservationists have for decades used a strategy different from most other countries. Instead of putting beaches where turtles nest into protected areas and blocking them off from local residents, they created a network of hatcheries where the tortugueros are paid for bringing in the eggs that they find. At the hatcheries, the eggs are put into artificial nests and protected until they hatch and then the hatchlings are released into the ocean.

In 2009, the government, with support from the U.S Agency for International Development (USAID) and several conservation organizations, expanded the hatchery system across the coast. Tortugueros are paid $2.50 for every 14 eggs; olive ridley nests average 110 eggs per nest, so one can earn about $20 from a single nest.

I recently visited two of the sea turtle nesting beaches in El Salvador and had an opportunity to meet with several of the country’s leading turtle conservationists and a few tortugueros. My first night on the beach in a small town called Toluca was a bit surreal with the sheer number of people stationed along the waterline, waiting for the turtles to come up. I’m used to beaches in Costa Rica where the conservationists walk the beach and people collecting eggs avoid any contact.

Prior to heading out to the ocean, I sat in on a meeting between Enriqueta Ramirez, who leads the ViVAZUL project (an initiative of Fabien Cousteau’s organization Plant A Fish), and about 60 or so local tortugueros. She explained to this group, mostly men ranging from 18 to 60 years old, how the rules would be changing this season, with ID cards to be handed out to those who participate with the program. 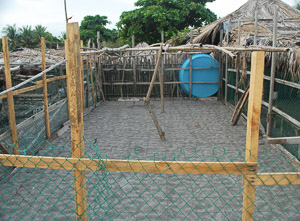 Afterward, I sat in on interviews with a number of the tortugueros to hear their opinions about collecting the eggs. While the older men looked at egg collecting as an important way to buy necessities, the younger ones seemed to look at it as a way to earn money for cell phone minutes or cigarettes. While many conservationists in the country believe that collecting eggs is a purely economic activity, Enriqueta believes there is a strong social pull to the activity, and the responses of the men mostly bore this out. They used the words “pastime,” “sport,” and “habit” to describe egg collecting and talked about building bonds with the other men.

The impact of the expanded payment program on the protection of turtle egg is been dramatic. In 2008, the year before the ban was established, roughly 180,000 eggs were saved. In 2009, the number jumped to one million eggs, and that number grew again to 1.5 million in 2010 and 2011, about 80 percent of all of the turtle eggs laid in the country. However, this stunning increase is primarily the result of the infusion of funds from USAID, not due to the law itself.

While the incentive program has resulted in a significant increase in protected eggs, the law itself has not been without controversy. The law was crafted behind closed doors with little input from the tortugueros or many of the conservation organizations working in the country. The law created tension among the communities and the conservation groups, who the local residents believed to have helped create the law. Conservationists support the law but say enforcement has been lacking since its passage.

I had a chance to speak with two Salvadorans who have a long relationship with sea turtles and their eggs. Don Vicente manages a hatchery in Toluca for ViVAZUL and has been running his hatchery for 18 years. He believes that the law has been a mixed blessing; while people now treat the turtles with more respect, many of the tortugueros who used to donate a dozen eggs for every nest they found now no longer participate and instead sell all of their eggs on the black market. 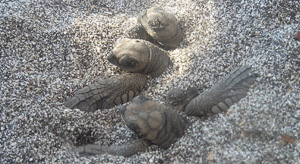 Isaac, who sold turtle eggs on the black market for years, is now a local hatchery manager for ViVAZUL. He believes that his neighbors’ views have changed; before the law, the people didn’t realize they were hurting the turtle population by taking eggs and some people mistreated the turtles. Now, he says people have a longer-term view of the turtles. However, the law, in his opinion, still needs work to better incorporate the needs of the local communities.

While these conflicts mostly have been resolved, many conservationists believe that if the incentive program were to end, the eggs would end up back in the hands of illegal traders. Several of the country’s leading turtle conservationists are working on plans to address what to do when USAID funding ends in 2013. Some, like Enriqueta, believe that more emphasis must be placed on educational programs so people start to look at the turtles as a valuable part of nature instead of merely an income-generating resource.

One organization that works with hawksbills in Jiquilisco Bay, the Eastern Pacific Hawksbill Initiative (ICAPO), is developing alternatives to payments.

“The ban provides an important legal framework for sea turtle conservation in El Salvador,” says ICAPO’s El Salvador Director Michael Liles. “However, its success is tied to direct payments for egg protection in hatcheries, which is financially unsustainable and does little to foment a conservation ethic.” 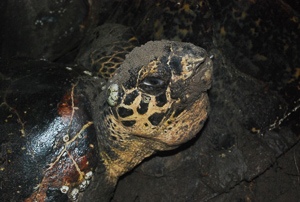 “By adding non-economic incentives to egg protection,” he adds, “we can begin shifting local discourse and values placed on sea turtles from purely economic terms.”

ICAPO has launched a competition called The Hawksbill Cup, which builds on the near-universal love of soccer to encourage the communities of Jiquilisco Bay and Padre Ramos to compete for bragging rights about who better protects their turtles. These two communities compete for the most number of nests protected, the percentage of eggs that hatch, and other factors. Michael has seen the impacts of the competition, currently set to start its second year, on the attitudes of the participants toward the turtles.

There is also hope of finding alternative sources of funding to keep the hatcheries open across the country. Ecotourism is being looked at as a way to bring in the funds needed to continue the incentive program. If local groups are able to bring travelers to these beaches to see turtles nest and hatch, it can both generate money to protect the eggs and bring in new income to these small rural communities. SEEtheWILD, a wildlife conservation travel organization, is working with organizations like ICAPO, ViVAZUL, and EcoViva to bring travelers and volunteers to El Salvador to contribute to turtle conservation efforts.

While it may seem far-fetched to fund the incentive program through tourism, the amount of money needed to purchase 80 percent of the country’s turtle eggs is less than $300,000 a year. With just $50 per traveler to this program, only 6,000 visitors per year are needed, fewer than the number of people at a big concert. Despite its troubles, El Salvador is now a stable country and is making significant progress in protecting its wildlife and reducing poverty. The ban on turtle consumption is a first step in bringing these delicate creatures back from the brink of extinction. The second step will be increased government enforcement, and with recent government crackdowns on the sale of hawksbill shell jewelry and turtle eggs, there is renewed hope for the sea turtles of El Salvador.