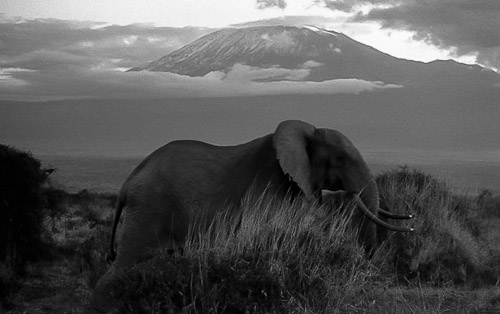 You know that feeling, looking back on childhood memories, when you aren’t sure whether the memory is actually yours? Perhaps you extrapolated it from a photo you saw or drew from stories you were told. Like dreams, you are often left most strongly with an impression, more emotion than memory. In the new film Lysander’s Song, the narrator describes Africa as a place where journeys linger as dreams, and the same can be said for watching the film.

As Lysander’s Song opens, we see a young boy, the wind whipping across his bare chest and through his blond hair. He stands on his mother’s lap, all smiles. Our narrator, presumably his mother, says, “This is a story about a boy,” an account of his journey to Africa. It’s a scene of freedom, of wilderness, of adventure. Yet he is not directly mentioned again until four minutes into the film. The narrator refers to someone named Lysander, and we assume this is the boy. For being the title character around whom this story supposedly revolves, his appearances are sporadic and we never actually hear him say anything.

This narrative quirk combined with the occasionally shaky camera work and I was off to a skeptical start. Yet while watching the film, I became transfixed. There is something special about Cyril Christo and Marie Wilkinson’s images – both of the elephants and the people to whom these creatures mean so much. In the combination of light and shadow, of large and small, each image holds a tenderness, respect and awe for its subject.  Watching, you cannot help but feel the same.

Lysander is Christo and Wilkinson’s son. His love of the elephants he saw on his trip to Ethiopia and Kenya is part of what inspired his parents to make this particular film. About a year ago, they made an incredible short piece entitled The Last Stand of the African Elephant that focuses more on the elephants themselves. Ali MacGraw narrates this call to action to protect the elephants from the poaching that could very well lead to their extinction. Lysander’s Song builds on that narrative and engages what elephants mean to humans – both in tangible ways, as well as in our collective consciousness.

I have been fortunate enough to witness elephants outside the confines of a zoo’s walls.  At the Mole National Park in northern Ghana, a small herd of elephants gather around various watering holes to drink and wallow in the cooling mud. Unfortunately the urge to catch something so magnificent on camera can truncate (no pun intended) your experience. Elephant one. Flash! Elephant two. Flash! Baby elephant. Flash! The park ranger ushers you along even as you crane your neck for one more shot. Lysander’s Song provides the visual luxury of the gaze.

How often do we watch, truly take in, the movements of animals, of elephants? The ends of their trunks work just like small appendages, picking up objects and manipulating the world around them. Instead of round, like I assumed, the underside of their trunks seem flat, hand-like. Their ears look so thin and vulnerable but, as the film says, they “billow like sails.” Then there are the elephants’ feet. From their solid legs, the feet flare out like giant suction cups rooting them to the earth. With each footfall a plume of dust rises from the ground and you think the elephant may never lift its foot from the soil again. Ground and animal seem intertwined.

The lives of many people in East Africa are indeed intertwined with the lives of the elephants around them. Christo and Wilkinson’s interviews with these people do not delve into the economic, environmental or even day-to-day relationships. Instead they focus on anecdotes that figure in peoples’ imagination and consciousness. The men of the Samburu and other local tribes share stories of how the elephants have helped them in times of need. In the stories, the elephants act as protectors, especially of mothers and babies. Even though they may prove benevolent, the elephants are always animals to be feared and respected. Most of all, they appear an integrated part of life. In one particular interview a Samburu man sits there bedecked in traditional beadwork, sporting a hat with the Starbucks logo, speaking of walking with elephants. In his life, different worlds not only collide, but attempt to coexist.

Both the stories and the film as a whole celebrate the physicality, intelligence and majesty of the African elephant. They emphasize the elephants’ important role in how we communicate values of strength, family, and caring.

The film features breathtaking images of elephants cast against the larger backdrop of the African landscape. The mountains and clouds loom large, dwarfing the gray herds below. Following Lysander’s journey, the impression that sticks with you is one of feeling very small. It reminds us how interconnected we are, and how as much as we learn and grow from the natural world around us, it is incumbent on us to do our part to give back.

Photos are copyright protected and may not be used without permission. All images are courtesy of Cyril Christo and Marie Wilkinson.