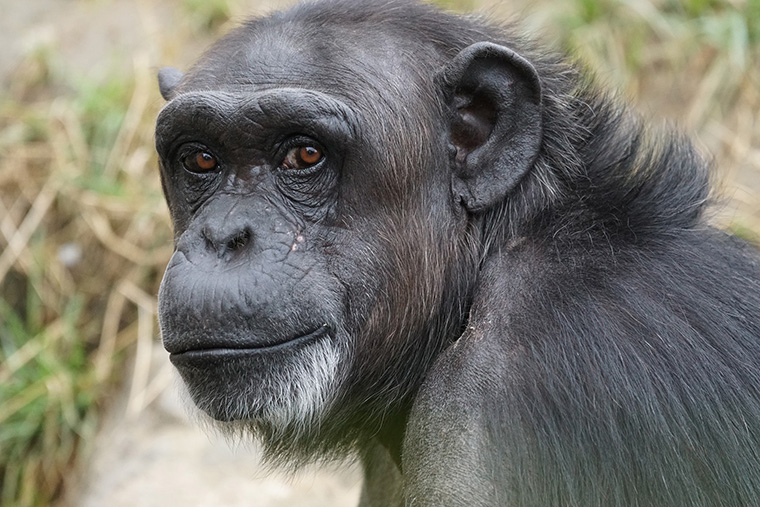 Anne lived in Dar es Salaam Tanzania while working for Peace Corps. The following visit to Gombe took place during a recent trip back to Africa to visit her daughter and granddaughter who still live there.

Dar es Salaam was so hot and dry that my husband, Jim, and I had almost forgotten that rain and cold weather even existed. We were however rudely reminded when we arrived in Kigoma, Tanzania, on our quest to see Jane Goodall’s chimps.

From the air, Kigoma was much larger than I expected and once the plane bumped to a stop, the remoteness of this corner of Tanzania, clinging to Lake Tanganyika, became apparent. The Democratic Republic of Congo could be seen dimly across the vast expanse of the lake, which is about a mile deep in some places. The brick-red earth had massive puddles of water and the trees glistened from a thunderstorm that was still rumbling nearby.

“I was worried we would land in a thunderstorm,” said the wife of the Finnish couple who were on the same plane and who own Jakobsen's, the tented camp where we had reservations. They have lived here for over 25 years and were returning from a holiday in Finland. Jim noticed the lag in the woman’s response when I asked her if she was glad to be back, which I attributed to her being tired.

“We are really grateful for this new runway,” she gestured to the old grass runway that was being taken over by weeds. After stowing their incredible amount of luggage (mostly food), we headed out on the newly paved main road. It was barely wide enough for two cars to pass, but was a huge improvement over the mud they had to traverse for so many years. For some unfathomable reason, the road stopped short of the airport, leaving a muddy stretch as testament to earlier times.

The next storm held off until we arrived at the camp and then, with a clap of thunder that reminded me of Missouri thunderstorms, the sky opened up and rain pelted down. Jim and I looked at each other, silently confirming that we had forgotten our raingear. “I have some slickers if it keeps raining,” Ingrid said. “Also, if you want, we have a house that has electricity and a kitchen — that might be nicer in the rain.”

We opted to stay in our picturesque tent with an attached bathroom, a little porch overlooking the lake and solar lamps. Just over a small bridge was a kitchen without electricity, but with a gas stove and all the necessary cooking equipment. I had several days’ worth of quinoa and some veggies, and Jim had his Pringles and protein bars, so we were set.

The kitchen was fully enclosed with metal grilling to keep out the Vervet monkeys. There was a large male who was intent on getting at any food he could. When thwarted, he took to jumping on the roof of our tent so violently that objects fell off the bedside tables. I later discovered that some previous guests had been feeding him; he wasn’t happy that we weren’t, and let us know it. 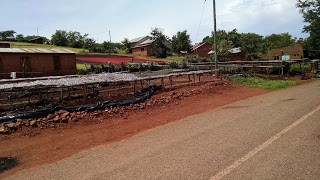 Once the rain let up, we took the opportunity to walk to the nearby fishing village.

A small baby burst into tears when he saw Jim’s face — it was obvious that not many foreigners have come this way. The huts were made of red mud, and some were melting back into the earth in the annual rains. The village was alive with locals conducting business. Women crouched down as they wove grass into baskets, and row upon row of tiny silvery fish were drying in the sun. These fish (cichlids) are a local delicacy and much desired by Tanzanians around the country. I felt guilty that I wouldn’t be bringing any back to my Peace Corps staff in Dar — let’s just say I wasn’t fond of the smell.
­­

The following morning, we awoke before dawn and headed down a short steep embankment to Lake Tanganyika to join three other travelers. These three live and work as guides in Serengeti National Park, but had never seen the chimps. A wooden boat pulled up to the sandy beach and, with the stars still twinkling overhead, we jumped in. Gombe Stream National Park is three hours away, so we settled in on the padded benches under a tarp roof. The captain immediately curled up on the floor, leaving his young assistant to navigate. Yesterday, the lakeshore had been littered with fishing boats that were being repaired and it wasn’t until today that we realized why there were so many. The boats were now tied together to make catamarans with large nets fitted between the twin hulls. The fishermen waved to us as we slowly chugged past on the smooth lake.

We didn’t know if anyone at the park knew we were coming, but we were greeted at the dock when we landed. There were no other visitors that day, so we set out. 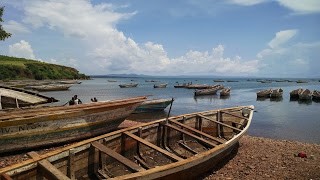 Jane Goodall was sent to Gombe in 1960 by Dr. Leakey to study the chimps living in the area. I heard Jane speak several times while we lived in Dar es Salaam, and I always particularly enjoyed her humor. When asked by one schoolchild why chimps are her favorite animal, she told us that that they aren’t, she actually likes dogs much better — but that she was sent to study chimps. Gombe is a small park — it’s only 20 square miles — which makes it easier to find the chimps.  The fact that the researchers have a good idea where they sleep also helped.

We were warned that visitors sometimes have to walk for four hours before their first sighting, so were pleasantly surprised when we heard the hooting and screeching of chimps after about 10 minutes. In a clearing, we found Ferdinand, the alpha male, lying on the ground doing what looked like yoga as he casually watched two females who were prominently in heat. I had trouble grasping the concept that our guide tried to impart to us —  Ferdinand was trying to separate the two females from the group so that he could mate with them.

The next three hours were like a soap opera as the guide interpreted what was going on with the chimps. We followed the group as they made their way to a tree, and then we hunched down on the ground to wait and watch, much as Jane probably did many years before us. All seemed quiet until the tree sprang to life. “You see that? The female was over there and starting to mate with another chimp and Ferdinand threatened her.” Okay, I thought. “Oh now, she is calling ‘Help! Help!’ to other chimps since she doesn’t want him to beat her.” I sure didn’t see that, but I guess the guide knows better than I do. “The other chimps are coming.” And so the soap opera went on until Ferdinand and family got tired of entertaining us and proceeded straight up the muddy mountain — with five white people and the guide in pursuit. We grabbed trees to help pull ourselves up the hill and jumped over streams. We caught up with them for another hour until we all agreed, “Enough chimps, let’s go have lunch.” 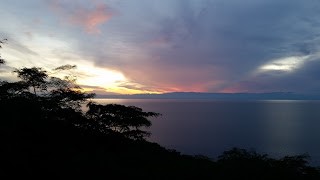 It was fascinating to see the house that Jane lived in and to hear about some of her escapades. All the houses had grilles on the windows and doors since chimps can be aggressive — one staff member’s small child was actually eaten by a chimp. Jane kept her son in a cage when he was young to protect him. We were told that although he still lives in Tanzania, he never comes to Gombe. I think I can probably guess why.

I can’t say that the chimps gave me the same amazing experience as I had with the gorillas in Rwanda that Diane Fossey observed. I have read criticisms of some of Jane’s methods and I have to admit that, after visiting Gombe, I also have my doubts about her research. She created feeding stations for the chimps using bananas, which are not part of their diet. Although they are no longer fed by humans, I do wonder how 50 years of constantly seeing (and being seen by) people and being given food have changed their behavior.

I am still very glad that I went to Gombe, though Jim was rethinking how glad he was when it started to rain on the boat ride home and we had to huddle inside our borrowed slickers.