David Quammen takes his readers on an intimate ride through some of the last wild places on Earth by delving into the relationships between people and predators, asking: Can we co-exist? From lions in India and Russia to crocodiles in Australia and Africa, Quammen explains the emergence of ecological theories and human social structures affecting large predators, sometimes through personal accounts with the people who took part in developing such theories. On this journey, he explores how predator exploitation, the marginalization of groups of people, and an increasing disconnection from the land by people who make land management decisions are all contributing to the rapid endangerment of large predators.

Quammen estimates that all large predators will be extinct by the year 2150 due to human exploitation of these animals and their habitat. In an effort to understand what has driven people to exploit predators, Quammen explores what he calls “the fear of being meat” while questioning just how deep this fear runs in the human psyche. During a powerful visit to the Chauvet Cave in France, where some of the cave paintings are said to be thirty-five thousand years old, one scene depicts a pride of maneless lions in a beautiful, thoughtful, discerning manner, leading one to wonder whether or not our primal instincts were always hard-wired to eradicate predators for human safety or whether we sensed more in our possible human connection to other species. Some of our ancestors found beauty, maybe even purpose, in these beastly beings, showing us that there is an element of human choice in our relationships with predators.

Destruction of habitat for large, territorial predators to accommodate rapidly increasing human populations is a major cause of their dwindling numbers. However, simply sectioning off squares of land as habitat for these animals is not a sufficient solution. In a visit to the Gir National Park and Wildlife Refuge in India, where lions struggle to survive amid growing human populations, Quammen hints that the lions of Gir might have had a better chance of survival if the pastoral Maldhari people had not been displaced in an attempt to protect lion habitat. When the Maldharis were moved off of the land they had shared with the lions for generations in order to create the refuge boundaries, Traditional Ecological Knowledge pertinent to peaceful coexistence between these people and lions began to disappear. The “language” that was spoken between the Maldhari and the Gir lions began to dissipate. This particular example illuminated the reality that the farther we move away from these predators, the less we, people and predator, understand how to sustainably coexist.

One aspect of the book I found problematic was the substantial absence of a female perspective – not one of Quammen’s principal interviewees was a woman. His informants were mainly hunters and male heads of the household. In many places around the world, women work close to the land via farming or gathering water in order to care for their families. It is not uncommon for women to be the first ones in the community to experience the adverse effects of poor resource management decisions, mainly degradation of land and water quality and quantity, which are often made by male leaders living in a different part of the country. This creates a disconnection between the decision-makers and the people who experience the effects of such decisions. Quammen’s failure to include women more prominently in his book further perpetuates the marginalization of women in resource management decision-making, which is a global loss. 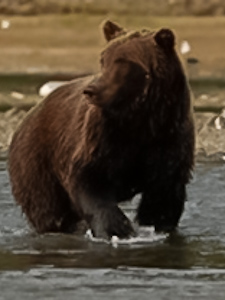 Despite the male-centered perspective, Quammen offers his readers an exciting journey in Monster of God. The book is vivid and visceral, peppered with witty sarcasm that often comes at the end of a chapter, enticing the reader to continue on. Although it offers a bleak outlook for large predators, it’s a good reminder that our relationship to these iconic creatures is reflected in the choices that we make on a regular basis. As our opportunities to experience predators in their natural habitat dwindle, simply choosing to read this book represents a desire for an increased understanding of our relationship with predators, ultimately creating more space for them to exist.