The ubiquitous cowboy image has worked its way into the imaginations of the young and young-at-heart, and for good reason. Popular culture throughout the world paints a picture of nobility: a man rough around the edges but unfailingly chivalrous, and a life full of adventure. Cowboys understand the land intimately and live seemingly romantic lives of abandon and mystery.

For many, they are also symbols of tradition and the traditional values held by many who live in rural areas from Australia to South America to the American West. It is easy, therefore, to understand why the wild cat conservation organization Panthera chose the image of a young cowboy to communicate its gentle conservation message to cattle ranchers and other local people in Brazil.

My Pantanal, written and directed by Panthera Vice President Andrea Heydlauff, follows the daily routine of Aerenilso, the son of a Brazilian rancher who dreams of growing up to be a pantaneiro – cowboy – like his father. The ranch is located deep inside the Pantanal, the world's largest wetland, located in southwestern Brazil. This habitat is also a point of contention between conservationists and land users.

"Living on a farm," the film begins, "we all wake up with the sun." Originally filmed in Portuguese and aimed at Brazilian communities, the simple, delightful narration takes the viewer through Aerenilso's morning chores: cleaning barns, grooming horses, feeding goats, milking cows, each described with the anxious youthfulness of a boy who only wants to go outside and play.

Once the chores are complete, Aerenilso bounces out to have his favorite adventure: attempting to catch a glimpse of the rare jaguar.

Generally feared throughout South America, this big cat can be especially problematic in ranching areas, and clashes between wildlife and livestock have given the jaguar a scary reputation. This film, the first produced by Panthera, is part of a larger initiative to find viable solutions to these conflicts that include education and cultural sensitivity. Projects include developing and operating several conservation ranches, such as the one featured in My Pantanal, on which employees are banned from hunting jaguars and other predators. Instead, they are encouraged to limit casualties and develop mitigation strategies.

With simple yet vivid storytelling, My Pantanal discusses the history of jaguar hunting and Brazilian cattle ranching. Aerenilso explores the ranch by horseback and the wetlands by boat, all the time looking for the wild parts of his own backyard. "The Pantanal needs cows and jaguars," the boy says as he excitedly searches the surrounding jungles for the big cat.

Sometimes, Aerenilso and his friends see the mysterious animal lounging by river banks or swimming through the lily pads; sometimes, they can only hear them or see footprints in the mud, and the children know that the jaguar is watching. With contagious awe, Aerenilso recounts some of the stories he has heard about this charismatic predator: "He lives on the ground, but he can touch the stars; that he can talk to the spirits of Earth and Sky. Some call him the master of fire because he taught humans the magic of fire."

Above all, the film tells us all that there is a way to co-exist. Cattle ranchers can continue to operate successful businesses while maintaining a respect for the large predators that share the grazing grounds. My Pantanal discusses many of the mitigation techniques used to protect livestock from predators, including low-risk traps (used by biologists to keep track of jaguars in the area via radio collars) and specialized corralling methods for cattle. And judging by the plethora of awards and award nods this short film has received, Panthera is getting the message out there. Most recently, it was voted the Best Children's Natural History Production at the Wild Talk Africa Film Festival and the Best Children's Program at the International Wildlife Film Festival.

The tone of the film is light and playful, educational without overwhelming the viewer with its conservation message. It's direct and pointed, but unfolds more like show-and-tell than a formal documentary. The youthful narrator talks about the history of ranching in the area and the history of jaguar hunting, as well as the importance of wildlife – including the big cat – to the surrounding wetlands and ranch lands. My Pantanal makes this complicated conflict easy to understand for people on both sides of the preservation argument and is the perfect way to introduce children to the many intricate issues behind the clash of culture and conservation and the creative solutions currently out there. 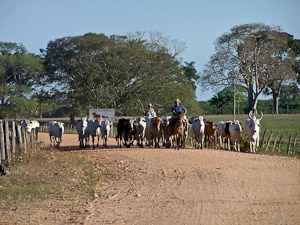 The ultimate goal of the film is to help stir up constructive conversations among ranchers, scientists, local residents and environmental organizations. Panthera developed the film first and foremost as an educational tool for those who face these decisions every day: the ranchers and their families and the local communities. By inserting conservation into a culturally respectful piece narrated by a local boy who wants to grow up to be a cowboy, Panthera has provided both Brazilians and international audiences with a delightful fable about the importance of learning to live together.