New Protection for the Heart of the Congo 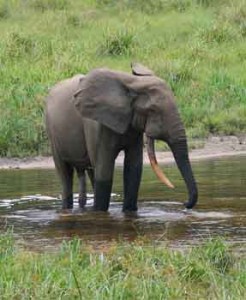 The Sahgha Tri-National Protected Area (TNS) bounds 10,000 square miles (25,000 square kilometers) of one of the most pristine regions of equatorial Africa, encompassing tropical forests, wetlands and natural clearings — known as “bais.” Large populations of iconic and endangered animals, such as African elephants and gorillas, require bais to survive. This is the only place in the world where herds of more than 100 forest elephants congregate.

As the name suggests, the Sahgha Tri-National Protected area is an intersection of three national parks at the boundary of the Republic of Congo, Cameroon, and the Central African Republic.  This unique region has just been declared as a UNESCO World Heritage Site, and is the first Site to span three countries.

“The TNS is the wild heart of the Congo Basin Rainforest.  It contains some of the last great populations of African forest elephants, gorillas, chimpanzees, and other endangered species.” said James Deutsch, the Wildlife Conservation Society’s director of Africa Programs, in a prepared statement.

For a region that has been historically threatened by unsustainable exploitation of resources,  such as poaching for ivory and illegal logging operations,  the UNESCO World Heritage Site designation is a major victory — one that required decades of conservation efforts from both government and private organizations in all three countries 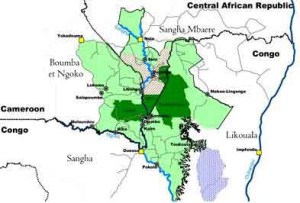 The purpose of an UNESCO world heritage designation is to “encourage the identification, protection and preservation of cultural and natural heritage around the world considered to be of outstanding value to humanity.”  These sites remain the territory of their countries, but gain international recognition as a valuable asset to the global community and are protected and maintained by the International World Heritage Program.

“This World Heritage status will introduce the TNS to the rest of the world and lead to increased support for the continued protection of the area’s globally important biodiversity and for the people that depend on it.”  said Stefanie Conrad, regional representative of WWF for the Central Africa region, in a prepared statement.

Often nature preserves or protected areas are confined to small territories, smaller than the ranges of the animals that inhabit them. Not so in this case where  the preservation of such a large ecological area will hopefully ensure the habitat remains functional and ecosystems will be undisturbed.

‘Wild Heart of the Congo’ Protected as World Heritage