I got my feet wet in fieldwork as an intern for the Conservancy of Southwest Florida in the 1980s. Literally. My feet got wet when my supervisor, biologist Dave Addison, unflappably led me through the waist-high water of Florida wetlands to conduct a natural areas inventory. While I worried about slipping into alligator wallows, he showed me how to identify each plant we came across. Dave and I became fast friends — nothing fosters friendship quite like exploring many miles of cypress swamp. On the weekends, Dave took me to meet other Conservancy interns who were helping with sea turtle monitoring.

Just over 30 years later, on July 3, 2019, at 12:03 am, Conservancy intern Kellie Bashaw abruptly stopped a few feet from the sea turtle tracks she had spotted in the dim glow of the red headlights of her ATV. She dismounted and followed the trail of disturbed sand up the beach to the edge of the vegetation, looking intently for the familiar dark shape. Hearing a rustling in the sea oats, Kellie squinted into the shadows and spotted her quarry. It was a huge loggerhead turtle who, with alternating strokes of her rear flippers, was flicking sand aside as she excavated her nest cavity. The side-to-side motion of her body slowed and eventually stopped. With her flippers on either side of the egg chamber, she then began to drop eggs.

Quietly, Kellie approached, red flashlight trained on the ground. The turtle was calmer now, other than the slight upward tilting of her body and an occasional sigh as she released her eggs. Kellie peered at her numbered flipper and checked the logbook. “Emily!” she exclaimed, forgetting her hushed manner. Jubilation on a cellphone followed, as she reported the turtle’s arrival to Dave. He was thrilled that his scaly old acquaintance was back. “I first knew of Emily as a data point when she was flipper-tagged in 1988,” Dave tells me. She has repeatedly returned to nest on Keewaydin, a coastal barrier island in SW Florida that has hosted generations of nesting sea turtles.

Loggerheads are listed as a threatened species. They face an onslaught of impacts, including poaching, accidental catch and entanglement in fishing gear, ingestion of ocean trash, shifting climate and ocean currents, and numerous onshore alterations to nesting beaches. Emily’s repeat visits to Keewaydin over more than 30 years make her one of the lucky individuals who have survived not only marine predators but also a multitude of human threats. “Such long-term data sets are not easy to come by and, of course, require the persistence of a sea turtle,” says Dave.

The numbered tag on each fore-flipper has a unique identifier for Emily (aka PPJ739) — a social security number of sorts. Dave and his seasonal interns attached tags obtained from the Archie Carr Center for Sea Turtle Research (ACCSTR) to the rear margin of the front flippers of nesting turtles. An address etched on each tag allows anyone who comes across a tagged turtle, alive or dead, to report its location and condition. Thousands of sea turtles visiting Keewaydin have been tagged over the years as part of the Conservancy’s program.

In a collaborative project between Dr. Kate Mansfield and Katrina Phillips, both sea turtle biologists at the University of Central Florida, Emily was one of 32 individuals who were also outfitted with satellite tags that allowed researchers to track their movements beyond the nesting beaches. Every time a satellite-tagged sea turtle surfaced to breathe, the signal was picked up by orbiting Argos satellites and sent back to Earth so their locations could be mapped. Affixed to her carapace, Emily’s satellite transmitter emitted a signal until the tag fell off in 2016.

Dave interprets Emily’s radio-tracking data for me. “After laying her last nest of the season, Emily departs the Keewaydin beach and heads for the Bahamas. Taking a consistent but winding route to the islands, she settles about 30 miles south of Andros, the largest Bahamian island.” Emily forages for an array of ocean life as she roams the Great Bahamas Bank near the edge of a marine canyon known as the Tongue of the Ocean. After two or three years, she heads back to the island she hatched on years before. “In April,” he continues, “she swims across the Great Bahama Bank, the Gulf Stream and Florida Bay, then back to her natal beach on Keewaydin.” 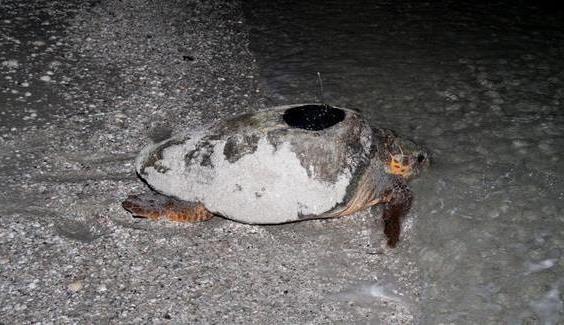 Emily entering Gulf waters on May 20, 2013, with a transmitter affixed to her carapace. Photo by Dave Addison.

Dave is awed by Emily’s consistent returns to the same nesting area. His team has spotted her on Keewaydin 13 times since she was first flipper-tagged. She nested 3–6 times at 10 to 12-day intervals, typical for a loggerhead turtle. From the resulting tally of 47 nests, each containing an average of 116 eggs, Dave calculates that — counting only the times his crew had seen her — she has laid roughly 5,452 eggs.

Sea turtle reproductive output (fecundity) over many years is one of their signature traits. In Emily’s case, monitoring records show that approximately 80 percent of her eggs hatched, resulting in about 4,421 hatchlings. “However,” Dave adds, “2 percent of those never reached the Gulf. Tides drowned some in the nest and opportunistic egg predators such as raccoons also took a toll. That leaves 4,334 hatchlings, an impressive number, but consider that it took Emily over 30 years to do it.” You also have to consider that new hatchlings swimming offshore make tasty morsels for hungry fish. As their shells harden up, the journey to maturity — 25 to 30 years for loggerheads — means lengthy exposure to toothy predators and marine debris.

No more than 1 in 1,000 marine turtles survives to maturity, which for Emily would mean 4 to 5 offspring that’ll become adults. This low survivorship, as Dave points out, means that “once you knock the reproductive props out from under long-lived species, it takes many, many years for the population to recover.”

On Keewaydin, another factor comes into play to limit sea turtle reproductive success — feral hogs. While hogs only preyed upon one of Emily’s nests, they were a disaster for many other nests. Dave explains that “the protocol for predator management on Keewaydin is that we install a raccoon-proof cage over each nest. But we didn’t anticipate that feral hogs would swim over from the mainland or adjacent islands.” Using their sharp tusks, hogs easily break through the cages and feast on turtle eggs. As Dave explains, “You have to catch the smart ones — the ones that solved the cage puzzle.”

Dave and his interns countered by adding hog hunting to their job descriptions. Baiting traps with rancid corn, they removed 21 hogs from 2014 to 2016. “That may sound like a lot of hogs removed from one small island,” says Dave, “[but] hogs reproduce like rabbits so nest predation continued to increase. Fifty percent of the nests were destroyed by hogs and coyotes in 2017.” More hogs were removed in 2018 and 2019, pre-pandemic, but there were still hogs on the island. Dave is staking his hopes on a new collaboration. The U.S. Department of Agriculture’s Wildlife Services Division and Rookery Bay National Estuarine Research Reserve began a feral hog removal project for all the coastal islands of SW Florida. Only five nests were destroyed in 2018 and none in 2019 or 2020; controlling hogs will require a sustained, long-term effort.

In the meantime, sea turtles nesting on Keewaydin Island will continue to play the odds for producing hatchlings that survive to maturity. And the Conservancy’s Sea Turtle Monitoring & Protection Program will continue to gather information toward protecting sea turtles into the future. Until he witnessed portions of Emily’s life over a 30-year period, Dave did not fully appreciate how doggedly persistent marine turtles are. He reflects that “if you wait, the turtles will tell you things, in their own way. You just have to be patient enough and do your best to understand things from a loggerhead turtle’s perspective.”

Dave shows me a photo of Emily’s torn flipper, a sign of the wear and tear that comes with age, which Dave equates with his knee replacement. He’s old enough now to find driving the beach ATVs loaded with research equipment to be tough. Yet he still counts on periodically spending nights on Keewaydin at the Sea Turtle Research Station. He doesn’t know whether he’ll cross paths with “Lucky Emily” again, but says, “No matter how many years I’ve done this or how mundane it may seem at times, there will always be those moments when the turtles or the island show you something you’ve never seen before — that’s the hook and what keeps you coming back.” 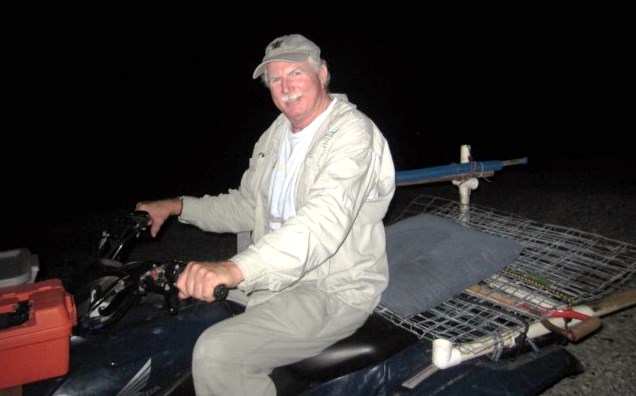 Dave Addison riding his ATV while protecting turtles on Keewaydin. Photo by Conservancy of SW Florida.