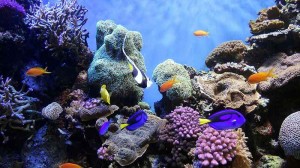 The photo to the left represents a beautiful, healthy coral reef which grants extraordinary benefits to both humans and the animal world. 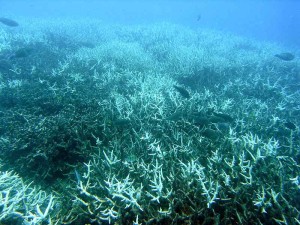 The photo to the right represents a coral reef which is suffocating from coral bleaching.

Coral reefs provide food to millions of people, unique chemicals for use in medicine, protect coastlines from erosion and storms, and are a major part of the thriving global tourism industry. In all, it is estimated that coral reefs contribute $375 billion to the world economy.

In addition to coral reefs’ numerous economic benefits, they also contain an astounding amount of biodiversity. Although coral reefs occupy only a small fraction of the world’s oceans, they provide a home to 25% of all marine species.

Almost all corals are colonial organisms composed of hundreds or thousands of individual coral polyps clustered together in groups. Most reefs are built from stony corals, with each tiny anenome-like polyp surrounded by a calcium carbonate shell. The unique and vibrant colors of many stony corals come from their zooxanthellae partners. 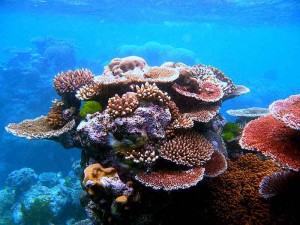 Each coral polyp has a symbiotic relationship with an algae (zooxanthellae). Corals are nocturnal filter feeders, extending their polyps at night to catch and feed on plankton. During the day the photosynthesizing algae works to provide the coral with essential nutrients, produce oxygen, and help the coral with waste removal. The coral provides the algae with protection and chemicals used for photosynthesis.
Bleaching

Releasing zooxanthellae is a natural way for the coral to lower photosynthetic production when needed.

But environmental changes in temperate, light, nutrients and water temperature can overly stress corals and cause them to release too many zooxanthellae and turn completely white – causing coral bleaching, Bleaching causes the coral a great deal of stress and greatly increases the chance of death. 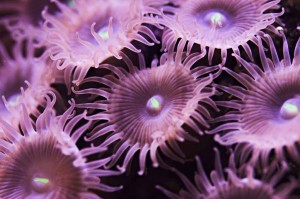 Ocean acidification has also been shown to cause coral bleaching.

Below is an educational video on how coral reefs function.

The video also details how reefs are being rapidly destroyed by coral bleaching, overfishing and other destructive fishing practices, pollution, and acidification of the oceans.

1. Inform yourself about the seafood you eat.

Some seafood is more sustainable than others. For example, wild Alaskan Salmon has less of a negative impacton the environment than farm-grown Salmon.

Spending your money with travel companies that believe in ecotourism and benefit the local community can go a long way toward protecting the environment.

Reducing your daily commute, consumption, and travel can help to reduce pollution, climate change, acidification of the oceans, and coral bleaching.

Learn more about Corals at NOAA