Confession: I am a lifelong lover of snow leopards. So, a couple of months ago, when I was sick of politics, I was happy to follow a Facebook-suggested link to Snow Leopard Trust. I eagerly read their posts and website, and even changed my home page from news to snow leopards.

One of the first stories I read was how Snow Leopard Trust is fostering peaceful coexistence between snow leopards and humans in the mountains of northern Pakistan, an area where I spent a great deal of time in the 1980s as a journalist covering the war in Afghanistan and the resultant refugee situation. In several villages, Snow Leopard Trust is helping to build predator-proof livestock corrals to discourage snow leopard predation and make humans a lot happier with their feline neighbors. One of the villages was Sor Laspur, a name that struck a chord in my memory. I looked at my journal from 1982. Yes, that tiny place high in the craggy, snow-crowned Hindu Kush Mountains was where kindly villagers had most likely saved my life when I had severe heatstroke. Now, 34 years later, I have a chance to give something back to them and at the same time help to protect the elusive big cat I have always longed to see in the wild.

I interviewed Dr. Ali Nawaz, director of Pakistan’s Snow Leopard Foundation, a partner organization of Snow Leopard Trust, through Skype from his office at Quaid-i-Azam University in Islamabad, just before he was to leave for summer field work in the Karakorams and Hindu Kush.

Nawaz’ fascination with snow leopards dates back to his post-graduate work in Northern Pakistan after receiving his PhD in Ecology of Brown Bears from the Norwegian University of Life Sciences. “The whole area, the environment, the landscape is fascinating…You fall in love with that area…the mountains, and the diversity of wildlife.” As he conducted his fieldwork, Nawaz realized the crucial importance of snow leopards “as an indicator of mountain eco-system health.” He also became keenly aware of the endangered cat’s conflicts with people living in the remote region of high-altitude valleys, dramatic glaciers giving birth to rushing rivers, and high pastures above small hamlets. 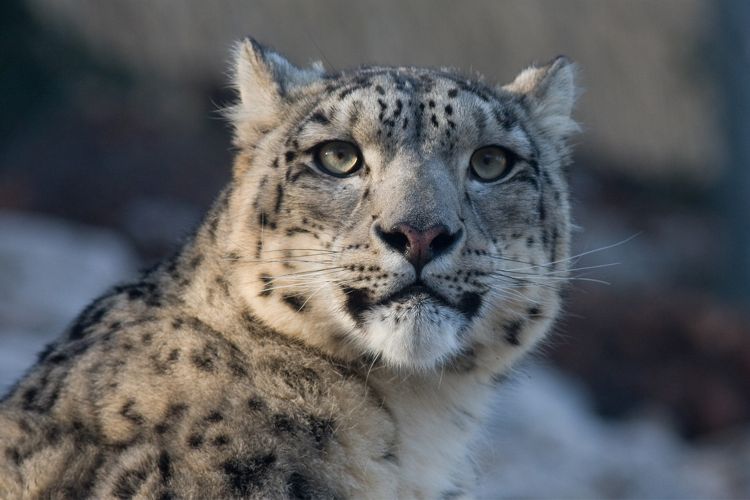 Snow Leopards are on the IUCN's Red List of Threatened Species.

Although the area is still relatively sparsely populated, human population has quadrupled since the 1950s, causing habitat loss and creating ever greater potential for conflict between the apex feline predator and humans. Snow Leopard Foundation initiated a study of the snow leopard population in the region, but does not yet have a scientific estimate. Nawaz’ educated guess is about 200—far fewer than the 350 to 400 as previously estimated. The world population is similarly uncertain. Despite recent media reports suggesting that there might be more snow leopards in their historical Central Asian high altitude range than previously thought, Snow Leopard Trust strongly cautions that incomplete science based on “regional estimates from various, in some cases unspecified, sources” could lead to complacency about the species’ welfare.

Climate change poses a threat to not only snow leopards, but their human neighbors and other species. Oddly, in many areas of the Karakoram, glaciers are surprisingly stable, a condition known as the “Karakoram anomaly” since glaciers throughout most of Asia’s great mountain chains are largely in step with the global decline. But as the climate in the Karakorams changes, human incursion to ever higher altitudes is expected to increase, and Nawaz says that “in the next 20 to 30 years, snow leopards’ large contiguous habitat may get fragmented. Some are warning of as much as 30 percent loss of snow leopard habitat.” That is a big concern because snow leopards need large contiguous territories — up to 1,600 square kilometers. One female who was tracked “was spending winter in Chitral (in Pakistan) and summer in Afghanistan.”

Snow Leopard Foundation, aided by Snow Leopard Trust, has been proactive in reducing human-wildlife conflict. Initially, surveys were done to assess villagers’ attitudes toward snow leopards, environmental education was brought into schools, and community meetings were held. The great majority of people considered snow leopards “useless animals” Nawaz says, partly because in Islam they were haram (forbidden, unclean), and partly because they preyed upon the goats and sheep that were the livelihood of families — sometimes decimating an entire herd in a single night. 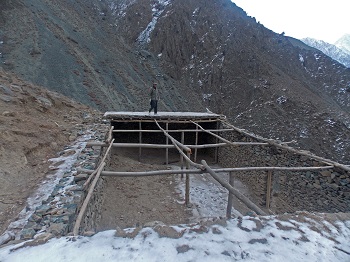 “When they hunt in open pasture,” Nawaz explains, “they may get one animal.” But when they enter the traditionally uncovered pens, “once they get in, they become panicked and kill almost all the animals.” This can be catastrophic. Nawaz recalls one family in the Khunjerab area that lost 80 percent of their animals in 2010, and it took them several years to recover economically. Villagers depend on livestock for their dairy products, and sell the animals for cash to butchers in the regional hubs of Chitral and Gilgit.

To address this problem, “we thought of preventive measures…a simple design of a corral with wire mesh on top, and a better gate. The villagers provide the labor and we provide the materials.” The communal corrals take three to four months to build and are situated in the summer high pastures above the villages. People collect local stone and break it up, while Snow Leopard Foundation provides iron posts, mesh, a sturdy gate and cement if it is easy to transport. To date, four corrals have been built in communities in Chitral, one in Gilgit, and the fifth for the Chitral district will be the one in Sor Laspur.

Through periodic surveys, Snow Leopard Foundation has observed a clear difference in attitudes after four or five years. “In the beginning, 80 to 100 percent of the people wanted to eliminate snow leopards…Now we see that up to 80 percent want to keep snow leopards in their communities.” Women in particular have been won over, not only by the protection of their families’ livelihoods, but by Snow Leopard Trust’s handicrafts program, which markets local handicrafts on the internet from communities in which they do conservation work. Products vary from embroidered napkins and Christmas ornaments to clothing and cat toys.

Snow Leopard Foundation also provides vaccinations for livestock against pneumonia, poxes, and various bacterial and viral diseases. “The rationale is very interesting,” says Nawaz. “We found disease causes five to ten times more mortality in livestock than predation.” Many herders, unaware of the effectiveness of vaccination, only seek the scarcely available veterinary care when animals are too sick to save. In addition, some diseases, such as scabies, have been transferred to wild ungulates such as the ibex and markhor that are the snow leopard’s natural prey, and even to the snow leopards themselves.

Livestock insurance, established with the support of private donors, also helps to offset herders’ losses. People pay a small premium of 5 to 10 rupees per animal. At the end of the year, losses to predation are tallied by a committee and herders are paid a portion of the value of each animal lost. 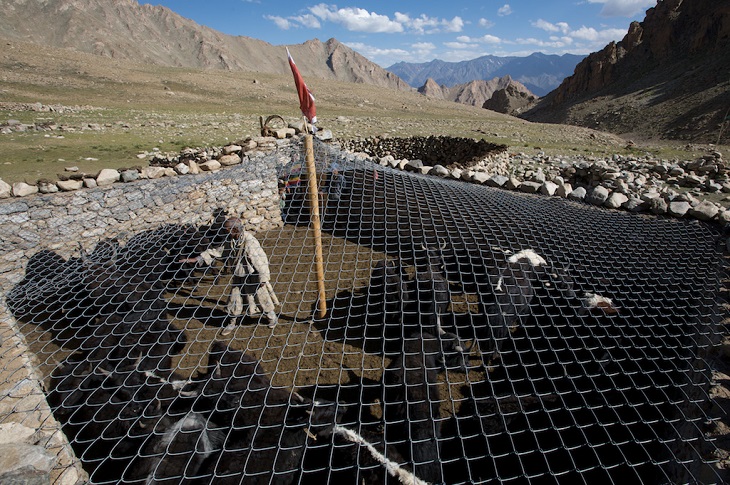 A herder and his livestock.

The Government of Pakistan’s establishment of a National Parks system in the 1990s has also helped protect snow leopards and the entire mountain eco-system. Karakoram National Park, created in 1993, includes twelve valleys in Baltistan, Gilgit and Hunza, and connects to Khunjerab National Park. Strict wildlife legislation has reduced poaching, which was a particular problem when some individuals in the NATO army in Afghanistan created a market for smuggled snow leopard skins.

Eco-tourism in Northern Pakistan has great potential, though conflict in other parts of the country discourages international tourism. However, Nawaz points out that internal Pakistani tourism has increased, which could lead to greater awareness and appreciation of conservation efforts.

For his leadership in snow leopard conservation, Dr. Nawaz was awarded the prestigious Whitley Award—sometimes referred to as the “Green Oscar”—in April 2016 in London. He is humble about this accomplishment, preferring to emphasize the opportunity “to interact with lots of people who are interested in conservation work…and spread the word about this very iconic species and its conservation challenges.” The prize money will be used to expand Snow Leopard Foundation’s work to more communities in Northern Pakistan, including training wildlife guards and wildlife survey staff, and the “management planning of the snow leopard landscape.”

Nawaz has had the good fortune of seeing wild snow leopards twice. Because they are so well camouflaged, they are difficult to spot. Twelve years ago, “Suddenly we spotted a snow leopard sitting in the sun. It was an amazing experience. We sat there and kept watching him for more than two hours.” And three years ago, in the Chitral area, Nawaz and his team watched a snow leopard breakfasting on a markhor.

Nawaz teaches his children about the value of conservation, and hopes that they will have “a motivation to work in wild habitats…We have discussions how these animals are unique, and how overall their conservation is important for the prosperity and survival of humankind.”

Photos courtesy of Snow Leopard Foundation Pakistan. Photos may not be used or reproduced without permission.