Q and A with Daniel Hudon

What inspired you to write Brief Eulogies for Lost Animals?

I used to be involved in a team-taught course at Boston University called Biodiversity: Causes and Consequences. I gave two lectures: one on the fossil evidence of biodiversity and another on the history of life. The history of life is a story of increasing complexity and though species come and go, there are several episodes where many species are lost in a short period of time: a mass extinction. In bringing the state of biodiversity up to the present day, I discovered that many scientists are concerned about today’s high extinction rate, which is hundreds, if not thousands of times higher than the rate seen in the fossil record. I ended the lecture with photos of recently extinct animals and let them fade away (to stirring effect among the students). Though I organized some eco-themed events for a week around Earth Day to raise awareness about this biodiversity crisis, the stories of some of the extinct animals began to haunt me. I began to explore them in more detail and write them up as literary prose. Once I had about a dozen stories, I decided to make a book out of them.

How did you go about researching this book?

I started learning some of the stories by reading two nice lushly illustrated coffee table books, The Doomsday Book of Animals by David Day, and A Gap in Nature by Tim Flannery and Peter Schouten. Then I found a list of about nine hundred extinct animals that I cross-referenced with the IUCN’s Red List. Peter Maas’ website, The Sixth Extinction, was also helpful. I wanted to write about some of the lesser known species, to give them their due, as it were, so I looked on the IUCN’s site for research papers and on JSTOR for papers on an animal’s natural history. Really, I was looking for any way to animate the animal: an eyewitness quote, a fact about its biology that we could relate to, even a line of poetry— anything that would bring it to life.

In the forward of the book, Stephanie Sears suggests that you remind us that the loss of each species corresponds with the loss of a part of our humanity. Would you elaborate on that idea?

I found your book particularly emotional to read. Your description of the last great auks being killed while they incubated an egg containing their doomed offspring was particularly visceral for me. Would you tell me about a species that touched you emotionally more than others as you were collecting information for this book?

But I grew fond of many of them. Steller’s sea cows who wouldn’t abandon their mates, the o’os with their beautiful calls, the many bird and moth species that tried to hang on to Laysan Island after it was gnawed down to sand by the introduced rabbits (for a failed rabbit farm), even the great names of the mussels of Appalachia — what’s not to love about the name tubercled-blossom pearly mussel?

I’m also struck by the scientists who named all those shrub frogs in Sri Lanka who lost their habitat and became extinct. One was named Philautus zal; zal is a Polish word that means “a sadness or regret, a burning hurt, like a howling inside you that is so unbearable that it breaks your heart.” I don’t think I’ll ever forget that word!

Some of the eulogies seem sadly short. What was it like to come across species where there was so little known of them that you could only write a few sentences?

I began to see the enormity of the tree of life, with its many branches, and branches of branches. Some branches have their champions, but sadly many do not. They just get registered or cataloged once or twice and that’s it. So I was frustrated in not having more to go on, to tell a more detailed story. Here, I was grateful to poets and nature writers who gave me a line or an impression that I could borrow to help animate this unknown creature.

You mentioned to me that this book was originally meant to contain illustrations. Could you tell me more about what that was meant to look like and what kinds of drawings you had planned on including? (Two of the illustrations accompany this Q and A.)

They were spare drawings, by my brother-in-law Mark Cromwell, often with shadows or in silhouettes to evoke a still image, as if frozen in time, or a ghostly image. Hopefully they’ll yet see light of day. 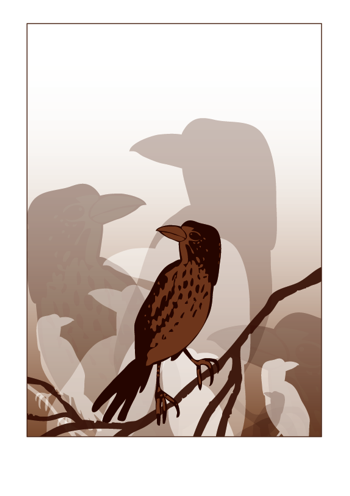 After collecting so much information about extinct species, what information would you offer your readers on everyday actions that the individual can take to prevent extinctions?

The first thing readers can do is engage. The US Fish and Wildlife Service maintains a list of endangered species by state. With a few clicks and targeted online searches (e.g. conservation groups), readers can find out what’s happening locally and join an event, which could be a seminar, a river cleanup, removal of invasive species or a bird count. One of the main drivers of extinction is habitat loss so readers can also fight to protect habitat, whether its forest, wetland, rivers or oceans. The group SavingSpecies buys land directly to connect isolated habitats and protect them, so they’re worth checking out. Around the world, forest habitat is being converted to palm oil plantations and pastures, so avoiding palm oil on a daily basis and reducing beef consumption are immediate steps that have an impact.

It’s going to take big thinking and investment on many levels. After habitat loss, other drivers for extinction include introduction of invasive species, pollution, overexploitation and climate change. I love E.O. Wilson’s idea of dedicating half the surface of the planet to nature. But even if we could figure which half, if the river that flows into a protected area is polluted, animals in the protected area will suffer. So our environmental problems must be seen in their larger context. Thinking that we could ever throw anything “away” has had a devastating effect on the oceans. High consumer demand is driving poaching and wildlife crime. So we have to examine our impact on ecosystems near and far.

Do’s and don’ts are helpful in the short term, but in the long term, our best chance of being successful with all of this is to change our narrative. We’ve let the narrative of capitalism tell us we’re consumers. We have to tell ourselves a new story, one that connects us to nature not just at meal time or on weekend outings but holistically. Yesterday I scanned a code on my cereal box and found out where the main ingredients came from. It turns out that some ingredients are from farther away than I’d like, but I like being able to use technology as a tool here to find out where my food is coming from. Agricultural biodiversity is something we also need to tune in to. This can be a way into our new narrative — what is our ecological community and how do we interact with it? For many of us, animals are “other” and nature is something to be conquered. Perhaps artists and writers can help us develop a narrative of connection, compassion and empathy. We share the planet with some 10 to 30 million species. We need to act like it.

In “The River of Bees,” the poet WS Merwin (who is replanting a palm forest at his home on Maui) writes, “We are the echo of the future.” We have to make sure that echo is loud and clear.

What are you working on next in regards to biodiversity conservation?

I have some ideas about expanding the present work but I think that’s down the road yet. I’d like to work on some positive conservation stories. Many islands around the world are being restored by removing invasive species. It’s a lot of hard work over many years, but there have already been successes. On Laysan Island in Hawaii, the Nihoa millerbird, a relative of the extinct Laysan millerbird, has successfully been transplanted to the island, so Laysan again has a millerbird for the first time in a century. Also, the goats have been removed from Guadalupe Island in Mexico, and a lot of the tree cover has grown back. But other invasive mammals — that prey on birds — persist, so there’s still work to do yet. New Zealand has also been doing work in eradicating invasive mammals on many of its islands. It’s going to be very exciting to see the bird life flourish on these islands again!

I’m also on the lookout for some conservation projects where I can get my hands dirty, as it were, as a volunteer. Nothing like the New Year for new beginnings like this!

The illustrations accompanying this article are the property of Mark Cromwell and may not be reproduced without permission of the artist.