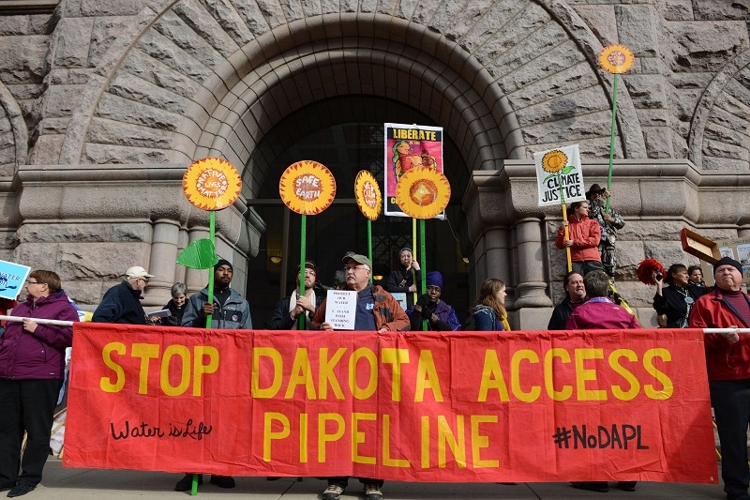 Anti-pipeline protests have been organized across the country.
Photo by Fibonacci Blue on Flickr Creative Commons

The proposed pipeline is 30 inches in diameter and would span over 1,000 miles. Its purpose is to move crude oil and, in July of 2016, the Standing Rock Sioux Tribe of Fort Yates, South Dakota, filed a claim against the Army Corps of Engineers, stating that the Corps had not considered important cultural and ecological impacts.

The pipeline’s path would cross barely half a mile from the reservation, passing under the Missouri River and potentially impacting the tribe’s drinking water. Furthermore, the pipe passes a sacred burial ground.

According to the Society for Conservation Biology, 90 scientists, in a letter to the journal Science, expressed “concern that the Dakota Access Pipeline (DAPL) could have large negative impacts both on biodiversity and the availability of clean water for the Standing Rock Sioux Tribe and others downstream of the proposed pipeline route.”

An oil leak would also hurt wildlife populations, including rare species like the Pallid Sturgeon, which is protected under the U.S. Endangered Species Act.

The Society for Conservation Biology highlighted a particular passage from one of the scientists:

"Oil leaks or spills can have disastrous impacts on water, land and the species and people that depend on them," said Stephanie Januchowski-Hartley, a scientist and one of the authors of the letter. "Cleaning up leaks and spills can also take an incredible amount of resources and time, rarely fully restoring what was lost from a system. Leaks or spills into aquatic environments, like the Missouri River and associated tributaries, can have disastrous consequences beyond the direct sight of the leak or spill."

Energy Transfer Partners, the company planning the pipeline construction, as well as state authorities could have invaded a sovereign nation. Alex Gilbert, cofounder of SparkLibrary and an energy analyst, writes on Storify that tribal nations are effectively “client” nations of the United States, and “the federal government has certain obligations to respect tribal sovereignty that it ignores at its peril.” Furthermore, a “federal district judge refused to issue an injunction to prevent desecration of sacred artifacts,” and thus legal remedies that should have been open to the Sioux are not functioning correctly. The protests, then, are not simply a matter of civil disobedience, they could be viewed as a territorial dispute between the Sioux tribe and the United States.

Looked at through this lens, state law enforcement officers are put in a difficult position. In a territorial dispute, only the federal government has the power to act, not state agencies. Police could be acting extra-jurisdictionally — and potentially charged with crimes just for following orders.

This is all in addition to the rough treatment many protestors have endured. The UN and Amnesty International have already sent teams to investigate violations of human rights.

President Obama has discussed the possibility of rerouting the pipeline, and agencies have asked for a delay in construction. However, Energy Transfer Partners has vowed to continue the project and they have begun mobilizing drilling equipment to tunnel beneath Lake Oahe. The protestors have promised that they will continue their mobilization as well.