Red Wolves: Hanging in the Balance 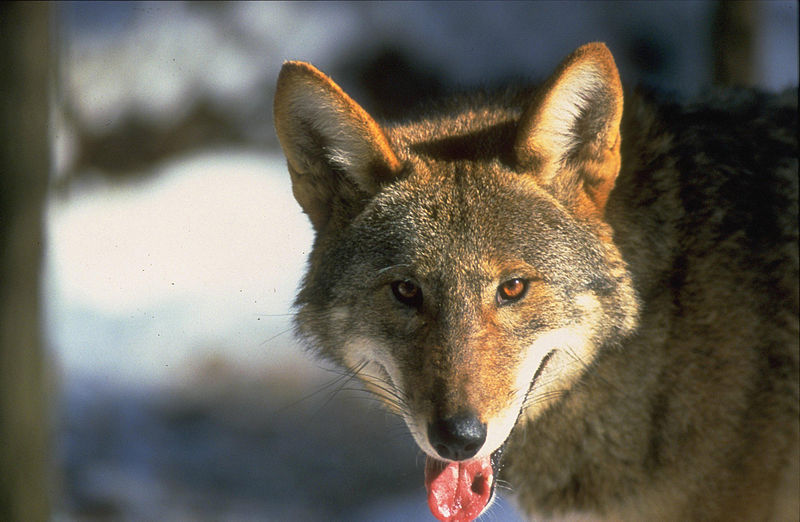 Gravel crackles under my tires and horseflies ping off the windows as I slow to a stop beside a mound of black bear scat, near the northeastern edge of North Carolina’s 152,000-acre Alligator River National Wildlife Refuge. I turn off the engine and scan the dew-slickened pasture beside the road, hoping to see the flash of a cinnamon-colored coat. But other than the turkey vultures circling overhead, it’s still. Just as I’m about to start the engine, I notice some movement. In the distance, three dark blotches hover at the edge of a grove of loblolly pine. When I blink, the smudgy splotches sharpen into distinct shapes, a black bear and two cubs, ambling toward the road. I watch them for a moment, but they are not who I’m after. I’m looking for one of the rarest creatures on earth — the red wolf.

A leggy, long-eared relative of the gray wolf, red wolves once inhabited a massive swath of the southeastern United States, roaming a range that included both the Gulf Coast and the Atlantic Coast, and extended northward to the Ohio Valley, through Pennsylvania and into New England, possibly even reaching the forests of southeastern Canada. However, the arrival of Europeans in the early 1600s brought colonization and a multi-century campaign of eradication targeting the continent’s large predators — especially wolves.

Wolves have always loomed large in the human imagination, featuring in the mythology of cultures worldwide. In European folklore, wolves are often cast as nefarious figures, unseen predators stalking the shepherd’s flock or beasts lurking in the shadowy woods at the edge of civilization. When European colonists arrived in America, they brought this internalized fear of wolves with them. Like other large predators, wolves were considered a threat to livestock in America’s early colonies. They were already subject to bounties in Massachusetts, Virginia, Pennsylvania and North Carolina by the early part of 18th century. Throughout the 1800s, America’s wolves continued to provide a lucrative opportunity for enterprising hunters known as “wolfers” who favored ecologically calamitous shortcuts, like using liberal amounts of strychnine. In the early 1900s, the federal government also got involved in predator eradication, tasking the Bureau of Biological Survey with eliminating wildlife perceived as a threat to agriculture or livestock, including wolves and coyotes. By the 1950s, wolves had nearly vanished from the contiguous United States — gray wolves remained only in northern Minnesota and on Michigan’s Isle Royale, while red wolves and Mexican wolves had almost entirely disappeared from the wild.

The Brink of Extinction

For red wolves, things were especially bleak by the 1970s. Less than 100 red wolves remained in the wild, confined solely to the coastal swamplands of southeast Texas and southwestern Louisiana — a miniscule sliver of their historic range. However, the passage of the Endangered Species Act in 1973 catalyzed efforts to save the species and, ultimately, the United States Fish & Wildlife Service (USFWS) rounded up the country’s remaining red wolves. By 1980, the species was declared extinct in the wild. Of the 400 wild canids captured by USFWS in the swamplands of Texas and Louisiana, only 14 wolves were deemed genetically pure enough for the captive breeding program designed to preserve the species.

While the species survived in captivity, the USFWS sought out a location suitable for reintroducing red wolves to the wild, finally choosing the Alligator River National Wildlife Refuge. Spread over northeastern North Carolina’s Albemarle Peninsula, the protected area offered ample prey, and both humans and coyotes were scarce. In 1987, eight red wolves were released into the refuge and a litter of wild pups was born within the first year. 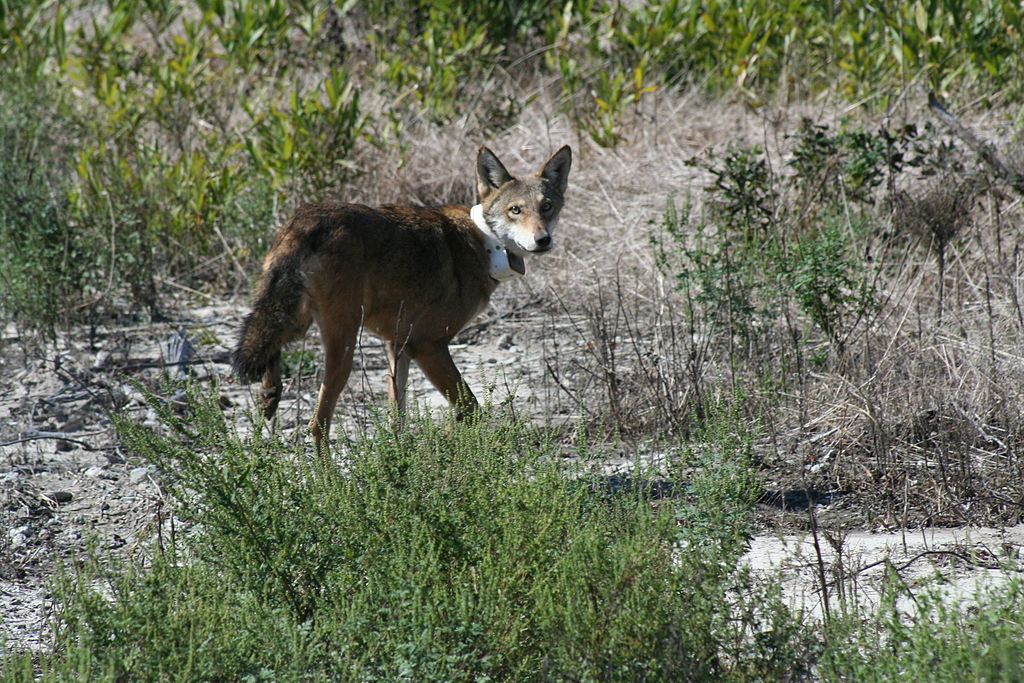 The population continued to grow and by the early 1990s, North Carolina’s red wolves had formed packs and established territory on the Albemarle Peninsula. The red wolf recovery area was eventually expanded to include 1.7 million acres of federal, state and private land spread over five counties. Red wolves became the first canids to be successfully returned to their historic stomping grounds after being extirpated in the wild, and the recovery program served as a model for other reintroductions, including the return of gray wolves to Yellowstone National Park in 1995 and the reintroduction of Mexican wolves to Arizona and New Mexico.

I know spotting a red wolf is a long shot. In the collage of sawgrass-tufted marshlands, shrubby pond pine pocosin and cypress-gum forest overlaying the Alligator River National Wildlife Refuge, it’s easy for the reclusive resident wolves to stay out of sight. Still, I’m optimistic as I drive the refuge’s mapped wildlife watching route, totaling about 15 miles. Winged sumac and devil’s walking stick bloom along the roadside beside freshly heaped mounds of black bear droppings, and pileated woodpeckers tap in the treetops. As I drive, I watch the fringe of foliage framing the roadway diligently but, other than the cottony hindquarters of white-tailed deer, I don’t see anything moving through the tangle of fetterbush and honey cup.

Aside from the camouflaging curtain of vegetation, there’s another reason the refuge’s wild red wolves are virtually impossible to spot these days — there aren’t many left. After peaking at more than 130 animals in 2006, the wild red wolf population in northeastern North Carolina has been steadily declining. Wild red wolves have succumbed to disease and been struck by moving vehicles, but the primary cause of mortality in recent years is gunshot wounds. Mistaken for coyotes, red wolves are being shot by hunters and inadvertently trapped on private lands bordering the recovery area. Today there are less than 20 red wolves roaming the Albemarle Peninsula — and last spring, there were no pups born in the wild.

The arrival of coyotes in North Carolina has complicated the situation for red wolves in other ways too. Originally native to the western portion of the United States, colonizing coyotes started inching eastward more than a half century ago, filling the ecological void left by the federally sanctioned predator control programs of the early 20th century that nearly eliminated both gray and red wolves from the contiguous United States. When the Alligator River National Wildlife Refuge was selected as a recovery site for red wolves in the late 1980s, coyotes were rare in the region. But by the early 1990s, coyotes had completed their march to the Atlantic Ocean and established themselves in North Carolina. As the red wolf population continues to dwindle on the Albemarle Peninsula, the presence of coyotes poses a serious threat to the gene pool — even prompting questions about the genetic integrity of red wolves as a species. However, a taxonomic study undertaken by the National Academy of Sciences published in the spring of 2019 determined the red wolf is indeed still a distinct species.

A Future in Limbo

Although questions about red wolf taxonomy may have been resolved, the future of the species in the wild is still uncertain. In 2018, the USFWS proposed changes to the management of North Carolina’s wild red wolves, including reducing the size of the recovery area on the Albemarle Peninsula from 1.7 million acres to 204,000 acres.

With a home range that can extend over 50 square miles, part of the problem for wild red wolves is space, especially in the southeastern United States. Less than one percent of the land east of the Mississippi River is federally designated wilderness, meaning red wolf habitat is in short supply — and not all reintroduction attempts have been successful. In 1992, the USFWS reintroduced red wolves into the Great Smoky Mountains National Park. But in the Smokies, wolves wandered outside the national park in search of food, and wild pups were plagued with parasites and parvovirus. The reintroduction effort was ultimately scrapped in 1998, and the park’s wolves were relocated to the Alligator River National Wildlife Refuge.

In the early afternoon, I decide to try my wolf spotting luck from the water and head for Milltail Creek in the heart of the Alligator River National Wildlife Refuge. I launch my kayak into the tea-colored water beside a fallen log adorned with sun-bathing yellow-bellied slider turtles and paddle west toward the Alligator River. From the water, the refuge seems even wilder and I realize that I can’t see anything beyond the screen of vegetation edging the streambank. 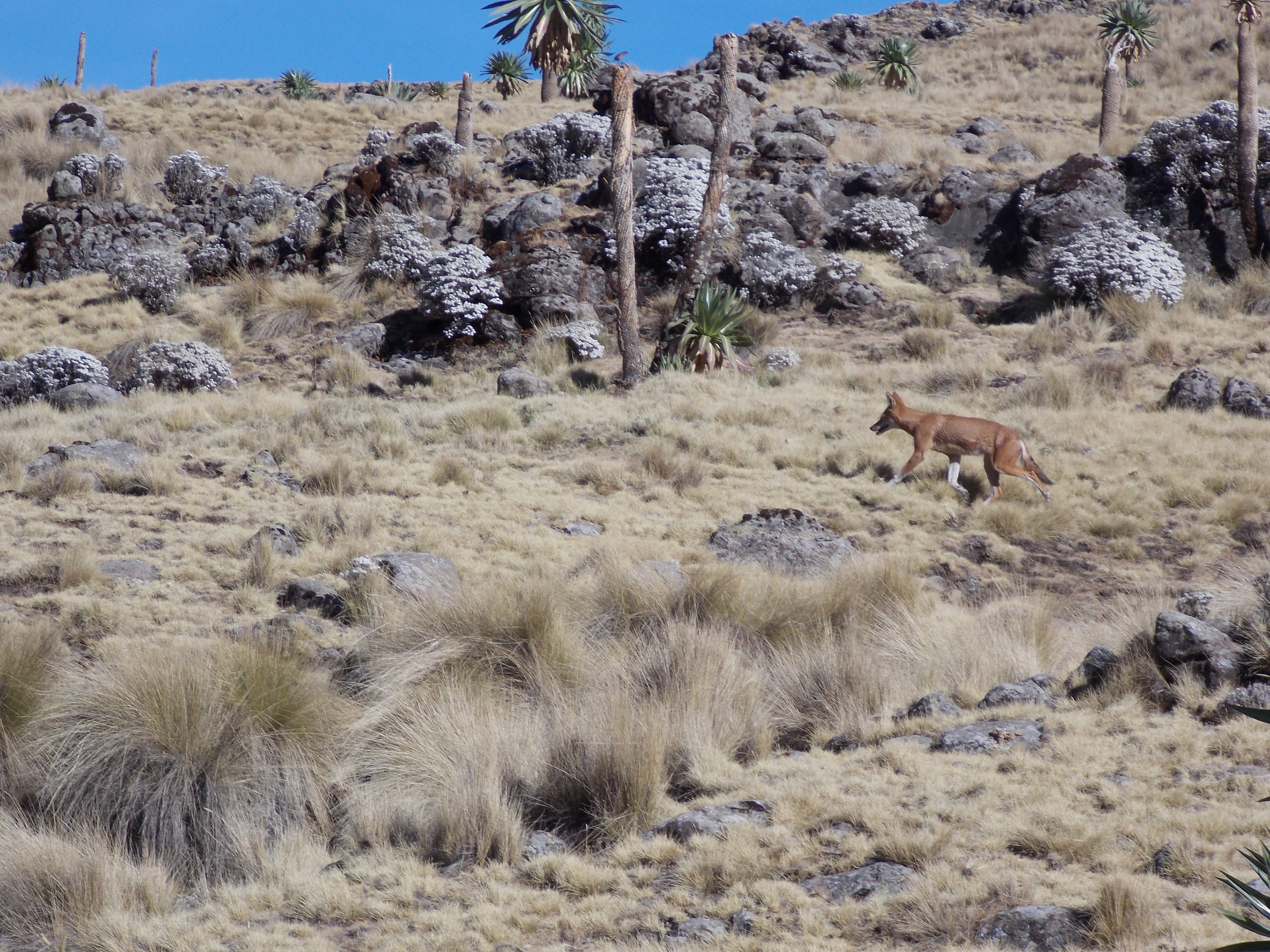 I have only been lucky enough to see one wolf in the wild, on a backpacking trip in northern Ethiopia’s Simien Mountains with my sister Lisa and her husband Mike in early 2015. While we frequently spotted grass-grazing Gelada monkeys, klipspringer and Menelick’s bushbucks along the trail, I knew it was unlikely that we would catch a glimpse of one of the endangered Ethiopian wolves roaming Simien Mountains National Park. But on the final morning of our trip, as we walked across a wildflower-dusted alpine plateau above the village of Gich, a ginger-coated Ethiopian wolf emerged from the mist, almost like an apparition. As we fumbled for our cameras, the wolf trotted with unfaltering purpose toward a tuft of tussock grass, pounced like a kitten and then emerged with a grass rat. I couldn’t help being impressed at the wolf’s ability to eke out an existence in the Ethiopian highlands, where prey consists primarily of small rodents and demand for agricultural land continues to claim the canid’s alpine habitat.

After a couple hours on the water, I decide to paddle back up Milltail Creek as cottony clouds cluster overhead. As I glide into the shallow water near the take-out point, my kayak spooks a spindly blue heron, and I pause to watch the lanky bird’s leggy launch. I’ll be back in eastern North Carolina this summer, and I know I’ll return to the refuge. I hope the red wolves will still be there.