After a 5:30 a.m. wake-up call and a two-hour boat ride with Roctopus Dive, I could finally see the pinnacle of Sail Rock, considered by many as the best dive site in the Gulf of Thailand. The water looked calm and smooth, and we were the only boat at the site. Gearing up to dive and readying our GoPro cameras, I knew we were all thinking the same thing: whale sharks. They had been spotted daily at Sail Rock, but I still didn’t want to get my hopes up. We didn’t dare say the phrase “whale shark” for fear of jinxing anything.

Little is known about whale sharks. According to Dr. Simon Pierce, a leading whale shark scientist, these fish can grow to nearly 40 feet in length and have been recorded diving to 1,928 meters. Despite their size, they feed only on tiny animals such as plankton and fish eggs.  I had been fascinated by these gentle, mysterious giants for the past two years, but had yet to see one.

Luck was with us that day. Within seconds of the first dive group plunging into the water, we heard somebody yell, “Whale shark!” Scrambling to get our gear on, we rushed through our buddy checks and jumped in. There were only four of us in our dive group, including our dive master, Mike. The whale shark, however, had already swam off — we had just missed it. Swallowing our disappointment, we descended to 62 feet  to continue our dive.

As I was checking out the coral, I saw Mike make the hand sign for whale shark. Before we knew it, this majestic creature was looming before us. Its 16-foot body was uniquely patterned with white dots, while its powerful tail slowly propelled it through the water. The whale shark’s mouth, known for opening wide to feed on tiny plankton at the surface, was a formidable size even when closed. 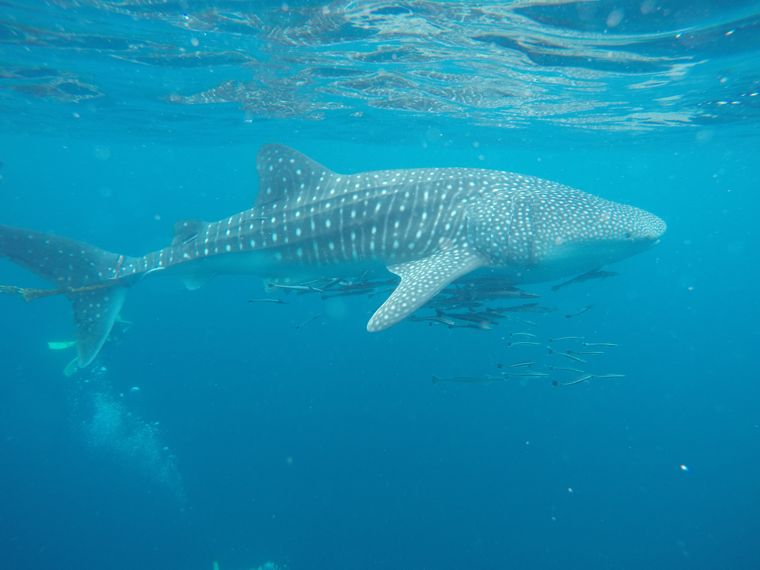 My regulator nearly fell out of my mouth. I chose not to snorkel with them in the Philippines or Belize because I hoped I would have an experience just like this one — that I would get lucky enough to dive with a whale shark as it swam through the depths of the sea.

Whale sharks are notoriously slow swimmers and, as the fish swam graceful loops around us, I could feel hot tears prickling at the corners of my eyes. But now was not the time to let my mask fog up! We kept a respectful distance and never reached out to touch the fish. Even as we watched the juvenile whale shark glide off into the distance, we hoped that it would circle back around.

And it did. Three times. When we ascended, we couldn’t help but hoot and holler at our good luck.

We had just swam with the biggest, most mysterious fish in the sea. Most research focuses on juvenile male sharks because they are easily found feeding in coastal waters. However, adult male whale sharks — the ones reaching 40 feet long — and pregnant females are incredibly difficult to locate and track. In fact, only one pregnant whale shark has ever been studied by scientists. According to Dr. Pierce, 70 percent of the whale sharks logged in the Wildbook for Whale Sharks, an online global database used by scientists, are male and 42 to 85 feet in length, which means critical research and identification of whale shark babies and females are lacking.

In 2016, the International Union for the Conservation of Nature (IUCN) moved the whale shark from near threatened to endangered on its Red List due to a sharp decline in their numbers. The population of whale sharks has decreased by more than 50 percent over the past 75 years due to “legal and illegal fishing, entrapment in fishing gear, and collisions with boats.” With increased research and activism efforts, scientists can work to protect the whale shark’s environment.

By the time we returned to our dive boat, word spread quickly that a whale shark was at Sail Rock, and there were now six dive boats waiting in nearby waters. We climbed back onto the Roctopus Dive boat and shed our gear. I was looking forward to a cup of coffee, but then a dive master pointed to the water. “A second whale shark!” he cried. It was swimming close to the surface, but away from our boat. A group of us grabbed masks and snorkels. We followed the whale shark’s bubbles and eventually reached it.

The whale shark was unusually close to us, only three feet away from the surface. Instantly, I noticed something that made my heart stop. A thick rope had been tied to its tail. The knot was so tight that it was cutting into the fish’s flesh, leaving a red, raw wound.

I spat my snorkel out. “Does anyone have a dive knife?!” I yelled. We only had snorkeling gear on and, while nobody knew what to do, I knew we had to do something.

I swam back to the boat. Out of breath, I told the instructors about the whale shark and, without hesitation, three of them threw on their dive gear and tanks. One of them, Michael Scherer, jumped in with a knife in hand. It wasn’t quite a dive knife . . . it looked more like a kitchen machete. But anything would do at this point.

We swam to where I had last seen the whale shark, but I couldn’t find the fish and there were only a handful of snorkelers in the water. I was worried that we were too late.

Suddenly, there it was again, close to the surface. To me, the whale shark appeared to come toward us for help. Michael immediately tried to cut the rope. He worked on it for thirty seconds, but it was clear the rope was knotted up tightly. The 13-foot whale shark grew uncomfortable and its powerful tail threw Michael off.

Then, amazingly, the whale shark circled around and came back a second time. Michael tried again, while at the same time ensuring the other snorkelers and divers remained at a respectable distance. The rope still wouldn’t budge. 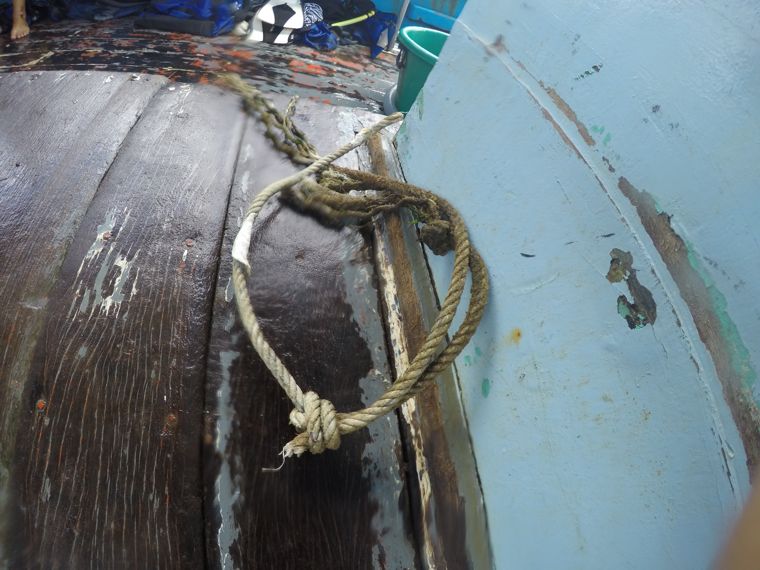 Back on the boat, we got a good look at the rope. It had been tied so tightly that a small part of the fish’s flesh had come off with it. We were still puzzled as to where the rope could have come from. Had the whale shark been tied up for cruel tourism purposes? Had someone attempted to capture it? We only knew that if the rope had remained on the whale shark for much longer, it would have done irreparable damage to the growing animal.

Dr. Pierce offered an explanation after viewing my footage: “The most likely scenario is that the whale shark was tail-roped so it could be pulled out of a tuna purse seine net. That rope would normally be a death sentence, so fantastic job to the team that released it.” He explained that he is currently working with WWF Pacific to implement safe release practices in tuna fisheries so this kind of situation can hopefully be avoided in the future.

In the days and weeks after the rescue, our favorite whale shark was sighted multiple times at Sail Rock. The wound was still visible, but had started to heal.

The rescue was a stark reminder of the damage that humans inflict on our planet and its animals. But it was also a reminder that, as humans, we can still do good. We know that one small act of kindness can go a long way, even for an animal as big as a whale shark: a gentle giant of our seas, an iconic animal to us diving enthusiasts and, ultimately, an endangered species in need of our protection and activism.

Photos and YouTube video are not to be used without permission from the owner, Alyssa Vinluan.