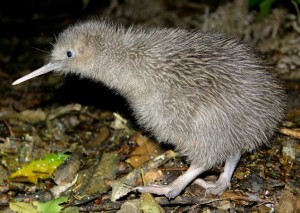 Twenty young flightless rowi kiwis got the chance to fly this week, as part of intense conservation efforts by the BNZ Save The Kiwi Trust to preserve this rarest of kiwi birds.

The wingless kiwi is sometimes referred to as an honorary mammal, because it has such un-bird like habits and characteristics. For example, kiwis nest in burrows, sleep standing up, have a body temperature lower than most birds (and more similar to that of a mammal), and have shaggy hairy feathers and long whiskers at the base of their beaks. Kiwis also rely heavily on their sense of touch and smell and are the only bird in the word that has nostrils at the end of their beaks, another way in which they are more similar to mammals than birds.

Their quirky, unique attributes have made the kiwi an icon of New Zealand. The five different species of kiwi have struggled to survive as humans have reduced their habitats, and non-native species have been introduced. However, more than 70 community-based groups have been working to protect threatened kiwi species and increase their rapidly declining populations.

The BNZ Save the Kiwi Trust, an active partnership between the Bank of New Zealand, The Department of Conservation and the Royal Forest and Bird Protection Society, has been funding conservation efforts since their establishment in 2002.  Thanks to research and conservation efforts, public awareness of the plight of the kiwi and threats to the kiwi population have been increased.

The three main threats facing the rowi kiwi are predators, habitat loss, and people.  Stoats prey on kiwi chicks, and dogs prey on adult kiwis.  In order to try to protect kiwi populations from these threats, the trust established Operation Nest Egg in 1995. This operation removes kiwi eggs and chicks from the wild and raises them in captivity.  When birds are big enough to fend for themselves, then they are returned to the wild.  Waiting to release the kiwi until they can defend themselves increases their chance of survival.

In the Spring of 2010, kiwi eggs were removed from the Okarito Forest on New Zealand’s South Island by the New Zealand Department of Conservation. From those eggs, BNZ’s Operation Nest Egg reared 20 rare rowi kiwi juveniles.  The relocation of these birds to Mana Island is the next step in the joint conservation effort.

Iain Graham, a ranger with Operation Nest Egg said in a prepared statement, “We expect that the absence of predator pressure, better breeding conditions and less competition for territories will ensure that the Mana Island rowi produce a high number of chicks that can eventually become part of the home population in Okarito.”

Breeding won’t start immediately because kiwis don’t mate until the age of four, but conservationists hope that this new habitat will optimize their chances for both mating and survival. Conservationists hope to increase the number of rowi kiwi to 600 birds in the next few years. In addition to the current conservation and research efforts aimed at reaching this goal, public awareness of the plight of the kiwi and threats to the kiwi population will continue to be an important part of a successful revival of this species.

More coverage of the rowi kiwi move to Mana Island:

Return of Kiwi to North Island After Hundreds of Years Absence

Find out more about the BNZ Save the Kiwi Trust and Operation Nest Egg:

Watch:  a newscast about the rowi kiwi move to Mana Island

Learn: more about the Kiwi