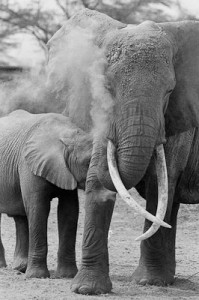 2011 marked the worst year for elephant poaching and illegal ivory trading since the height of the trade in the 1980s, according to the UK-based Environmental Investigation Agency (EIA).  Following this lamentable news, both the British Parliament and the US Congress held hearings to address possible steps that the United Kingdom and the United States, respectively, could take to curb the effects of what seems to be a growing problem.

The Congressional hearing, titled “Ivory and Insecurity: The Global Implications of Poaching in Africa,” was held on May 24, 2012, with Massachusetts Senator John Kerry (D) presiding.

After Senator Kerry introduced the panel, Iain Douglas-Hamilton, founder and CEO of Save the Elephants, an organization working in Nairobi, Kenya, thanked the United States for its support in the past and urged the support to continue, especially given the upsurge in poaching. “What’s happening to the elephants is outrageous, and the more so since we have been through these ivory crises before and should have found solutions by now,” he remarked.

And while Douglas-Hamilton mentioned in May that the issue was not yet “on the radar” of people in the United States yet, The New York Times reported recently that two jewelers were found guilty for smuggling and dealing ivory-made jewelry.

The reason for this sudden upsurge in illegal ivory trading, and by extension the poaching of elephants? East Asian markets that are sympathetic to ivory trading.

Particularly in China, where the market is thriving, laws concerning ivory trade still exist only to regulate trade. In other words, ivory trading is still permissible by law.  Naturally, when there is a continuing demand for ivory products, there also exists a black market for it, leading to the slaughter of unsuspecting gentle giants in Africa.

For wildlife enthusiasts and nature lovers, the elimination of poaching is a logical and necessary part of preserving these majestic, endangered animals. But others, not motivated by the same causes, may need more incentives to take action against poaching. Tom Cardamone, managing director of Global Financial Integrity, provided such an incentive at the Congressional hearing. He spoke extensively of the toll that allowing poaching for ivory to continue unchecked would have on the global climate, beyond financial repercussions.

Most countries that have anti-poaching laws only collect small fines and require even smaller prison terms as punitive measures. But the monetary value of trading ivory is very high, comparable to narcotics trading. According to Cardamone, this favorable relationship between risk and reward makes poaching an “extremely lucrative business in which to engage.” Furthermore, the high profit margins of ivory poaching and trading make it more appealing to organizations that are otherwise hard-pressed for money, organizations such as Al-Qaeda and other terrorist and criminal networks.

The final witness in the hearing was John E. Scanlon, secretary-general of the Convention on International Trade in Endangered Species of Wild Fauna and Flora (CITES). He informed the people gathered at the hearing on the challenges that CITES faces when dealing with an issue as widespread as poaching. He also spoke of the measures currently in place to tackle the problem, such as surveillance and tracking of illegal ivory. While he touched upon the financial and criminal implications of not acting to mitigate poaching, he also emphasized the audience of the importance of gathering intelligence.

“The depth of analysis of wildlife crime is poor in comparison to that of other areas of illicit trade,” said Scanlon. He cited the analysis of illicit drug trades by the United Nations Office of Drugs and Crime as an example. “There is a need for a more systematic and thorough global analysis of the illicit trade in wildlife,” he said. Only then could we truly begin to implement proper trafficking techniques.

While a congressional hearing spotlighting ivory trading and poaching may seem like a step in the right direction, the sad fact is that the burden to protect wildlife largely remains on countries in which there are no naturally occurring herds of elephants (or other ivory-wielding animals, such as rhinos). The people that truly need to take charge of the movement are, unfortunately, the people who are complicit in the illegal trade. For now, it remains to be seen what legislation will come out of Congress to help the effort ━ and if implementing any such legislation will indeed aid in putting an end to the devastating practice of ivory poaching and trading.