Searching for the Fossa 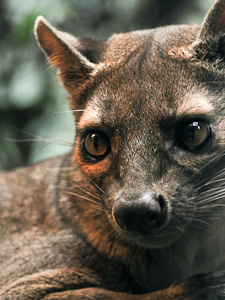 I slowly place my boot back down onto the forest floor and cringe at the loud crunch of dried leaves under my foot. Pausing, I scan the quiet trees for a flash of color or flutter of wings, but I really hope to see the shaking of branches signaling a group of lemurs bounding effortlessly through the canopy. Flies, attracted by the stench of rotting meat, buzz around the bait bucket, breaking the silence of the mid-afternoon heat. There’s a reason the person assigned to tote the bait is relegated to the back of the census group: the bait has certainly matured, turning from raw red to a putrid gray, perfectly ripe for fossa.

As we approach the next trap on the forest grid, I wait with other volunteers as a staff member inches quietly toward the metal cage. The trap would rattle frantically if we’d caught an animal, but it remains still. “Time: 4:30; Bait: Good; Trap: Closed.” Something has been tampering with it, though we didn’t catch the culprit. “Let’s add some bait anyway. Hopefully, the fossa won’t be able to resist all this meat.”

Prior to my experience as a volunteer in Madagascar, I had never even heard of the fossa (Cryptoprocta ferox), the top carnivore endemic to Madagascar. Similar in appearance to that of a miniature cougar, it has a surprisingly long tail and a dense muscular body armed with sharp claws and teeth. An opportunistic eater, fossa will consume just about anything, especially lemurs. As a top predator, the fossa is a keystone species that plays an essential role in the Madagascan ecosystem. It is listed as vulnerable by the International Union for Conservation of Nature (IUCN), as deforestation and competition with feral dogs and other non-native carnivores threaten the fossa’s tenuous populations found throughout the country.

Madagascar is an island nation located off the southeastern coast of Africa in the Indian Ocean. The island contains a treasure trove of flora and fauna; 80 percent of its wildlife and 90 percent of its plant life exist only in this biodiversity-rich hotspot. Tenrecs, aye ayes, chameleons, ploughshare tortoises and, of course, the famous and charismatic lemurs all call Madagascar home. While one of the richest countries in terms of biodiversity, the Red Island – so called for its rust-colored soil – remains one of the poorest nations in the world. 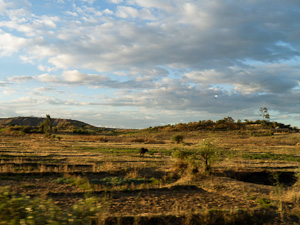 As we traveled through the countryside from the capital Antananarivo to Ankarafantsika National Park in the northwestern part of the island, the country’s history of slash-and-burn agriculture and massive deforestation was painfully apparent. Landscapes, once alive with forests, are now vast expanses of golden grasses dotted with occasional trees. As much as 90 percent of Madagascar’s original forest cover is gone. Habitat loss continues to pose an enormous threat to the island’s magnificent flora and fauna.

Checking traps for predators is just one of the responsibilities of volunteers and staff on this conservation and research project. Studying and monitoring the fossa population in Madagascar’s Ankarafantsika National Park also involves conducting a population census of fossa. Once a fossa has been trapped, it is tranquilized and brought back to the research base camp, where the lead scientist and veterinarian collect blood and tissue samples, take morphological measurements, and tag it in order to identify the individual in the future.

I set the bucket down, open the trap and fling a piece of rotting meat into the back of the cage. I take the stick securing the piece of meat already there and pierce a fresh piece on top of it. Once I’ve staked the bait, I reset the trap. We proceed slowly along the grid, checking traps for fossa, freshening bait and recording any vertebrates we encounter. The quiet whooping and subsequent sighting of the hoopoe – a red-headed bird with black and white zebra-like plumage – stops our group in its tracks; the scribe notes the number of individuals seen, as well as their height and distance from the trail. The light between the trees illuminates the innumerable vines and branches, bestowing a soft, otherworldly haze onto the Malagasy forest. 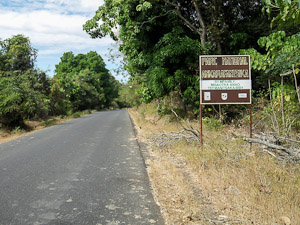 Much of what is now known about the fossa – its life history, behavior and role in the ecosystem – is the result of intensive research from project investigator Dr. Luke Dollar. Dr. Dollar first came to Madagascar to study lemurs as a college student and field assistant in 1994. When a fossa ate his study animal, his curiosity about this enigmatic predator led him to become a successful wildlife biologist and National Geographic Explorer who has dedicated his career to fossa conservation.

Prior to his work, very little was known about the elusive animal, which, though harmless to humans, is feared and killed by the Malagasy people, who blame the fossa for preying upon domestic animals. In fact, fossa actually aid in controlling populations of rats, pigs and other pests that damage crops and diminish yields.

While science originally played a central role in the mission of the project, conservation actions such as community outreach and education now constitute an essential element of the project’s goals. Posters with the project’s mantra – “arovynyfossa, arovynyvokotra” or “save the fossa, save the harvest” – have been distributed throughout the country, and the message is clearly reaching people. Many have told Dr. Dollar stories of how they prevented their villages from killing fossa. The recapture of numerous recorded individuals within Ankarafantsika gives hope for the species’ recovery, in spite of its diminished population.

One of Dr. Dollar’s research sites is located within Ankarafantsika National Park. The park contains one of the country’s largest remaining tracts of dry forest. It opens to a savannah of tall grasses surrounding red dirt tracks, which have been placed periodically to prevent the spread of fires. In the savannah lies an enormous canyon, the result of massive erosion that continues to swallow the forest year after year. Its name, Lavaka – meaning “hole” in Malagasy – is an understatement. Trees and shrubs that have not quite slipped into the Lavaka cling desperately to the canyonwalls. Spires of multi-colored sand rise ominously throughout. An awe-inspiring sight, the Lavaka would be considered beautiful if not for the distressing reality surrounding its origins and growth. 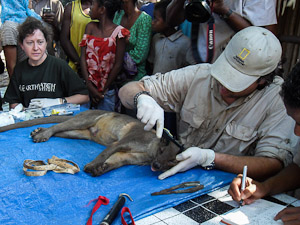 Across the only paved road cutting through the park is a forest of a greatly different character. Situated next to the crocodile-populated lake, this forest is noticeably more humid and bug-infested than the dry forest. It seems more jungle-like and often feels cooler due to its high, dense canopy.

Malagasy people fuel the research and inner workings of the project. Ambodimanga, which means “beneath the mango trees,” is one of many villages inside Ankarafantsika National Park. Dr. Dollar’s project has a special relationship with the Ambodimanga people. A vital part of the day-to-day function of the project involves many villagers: the village women cook, do laundry and maintain the campsite for researchers and volunteers who pay them for their services.

When project participants are not on site, the campground remains open for tourists visiting the park. A local women’s group called EZAKA uses the revenue made from tourists, researchers and volunteers to better their own lives in Ambodimanga. These funds build wells, improve the campsite, encourage more tourism and send children to school. Prior to Dr. Dollar’s collaboration with EZAKA, children from the village did not attend school; today, more than a hundred are receiving an education, and soon the project will complete the construction of a primary school within the village itself. 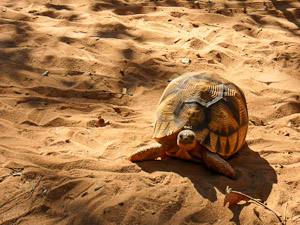 As made evident by the involvement with Ambodimanga, the mission now extends far beyond researching Madagascar’s top predator. Apart from the collaboration with EZAKA, veterinarian Dr. Julie Pomerantz has spayed and neutered village cats and provided services to Malagasy families’ pets. In addition, dentistry students from the United States have stayed at the campsite and worked with volunteers to improve the dental hygiene of Malagasy people; local villagers travel for miles to receive dental work – primarily the pulling of rotten teeth.

Malagasy Lessons
I have been unbelievably fortunate to travel to Madagascar twice – once as an eager, wide-eyed seventeen-year-old volunteer on Dr. Dollar’s project, and again as an equally eager nineteen-year-old field assistant. My experiences there were, undeniably, the most formative in my life thus far. I have no doubt the insights on conservation issues, the universal connections among people, my view of the world and my role in it have all fueled a continuing desire to broaden my perspective.

My impression of conservation prior to my first experience in Madagascar was that it consisted of two elements: the scientists and the animals they protect. But what happens to the animals beyond scientific study? If it were strictly foreigners who cared about indigenous fauna, conservationists’ work would be ephemeral. The most effective conservation involves local people: they are ultimately responsible for their region’s wildlife. The Malagasy people share their home with the fossa and truly determine its fate. Forming relationships with local people and learning about their lives and their relationships with wildlife are all essential for success.

I went to Madagascar expecting to see an amazing range of wildlife in natural habitats. And I did. I also expected this would be the high point of my trip. But it wasn’t. Holding a fossa, spotting lemurs and observing chameleons were all incredible experiences I cherish, but my most meaningful memories are those of the people. Speaking, in my limited Malagasy, to the women who cooked for us, waving salama to people I encountered walking to and from trap checks, learning about the lives of girls in Ankarafantsika, and spending time with the Malagasy university students – these are the memories that make me yearn to return to the Red Island.

Photos are copyright protected and may not be reproduced without permission. Fossa is used under Flickr Creative Commons Attribution License 2.0 Generic and is courtesy of Ludovic Bertron; all other images are courtesy of Julia Osterman.