Standing up for the Baboons: Primatologist Paula Pebsworth

"We have learned a lot from observing animals," says American primatologist Paula Pebsworth, who has recently completed her dissertation on self-medicative behavior in chacma baboons in Wildcliff, a small private nature reserve in South Africa's Western Cape. "The decision [of] what to eat must have been a difficult one for early man and woman, as many plants are toxic and a bad choice could cost you your life. Taking note of what plants animals ate could have helped humans determine which ones were not only safe, but might also restore health." 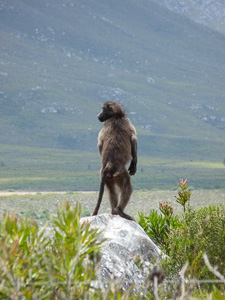 According to Pebsworth, it was these collective decisions that shaped human diet, our use of medicinal plants and the consumption of soil, a behavior known as geophagy.

Pebsworth first became interested in primate self-medication as a result of her fieldwork in the mid-90's with lemurs in Madagascar and then with chimpanzees in Uganda. This led to her interest in chacma baboons and to her dissertation entitled "An Investigation of geophagic and ranging behavior of chacma baboons (Papio hamadryas ursinus) living in a human-modified habitat," which has earned her a DSc in primatology from Kyoto University.

Pebsworth's studies examine both the eating habits of the baboons, including soil consumption, and the macro issue of the human effects on baboon habitat and habits.

"There are two basic hypotheses," she says. "One is that eating soil provides minerals. The other is that soil provides protection from plant secondary metabolites, parasites and pathogens."

Pebsworth leans toward the latter theory. The approximately 115-member troop she studied in Wildcliff has a lot of parasites, and they frequently eat clay, which can line the gastro-intestinal tract, making the effects of parasites less pronounced. In addition, it can alleviate stomach upsets caused by plant toxins like tannins, alkaloids and saponins, which generally protect plants from being eaten. When consumed by animals, these compounds can help combat parasites, but they can also cause stomachaches.

"The baboons eat soil from several locations," Pebsworth explains, "but they clearly prefer some areas over others." In Wildcliff, she found that soil composition is varied, but the baboons prefer soil that is white, alkaline and primarily composed of illite, a highly adsorptive type of clay. Anthropological research has shown that women in many traditional societies have historically eaten clay to alleviate morning sickness during pregnancy. One can speculate that they learned the value of eating clay by watching animals. Clay is also used in Western societies to treat stomach ailments. An example is the kaolinite that was once used in Kaopectate. 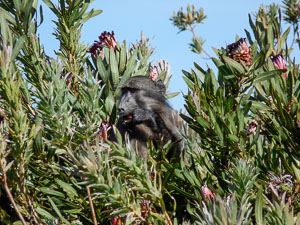 Pebsworth is currently engaged in post-doctoral research at the University of Texas at San Antonio, where she hopes to answer additional questions about baboon geophagy by working in controlled circumstances. By feeding captive baboons soil similar to what wild members of their species eat, she hopes to demonstrate that pregnant baboons eat more soil than non-pregnant baboons and determine if there is a preference for certain types of clay.

The practical application of this research could improve the lives of captive animals. "If I can demonstrate that clay is beneficial, I'd like to create artificial clay sites for captive animals to provide a self-medicative opportunity for them," says Pebsworth. "There will always be animals in a captive setting," she points out, "and as I've gotten to know people who work in zoos, I realize they expend a tremendous amount of energy creating a rich environment for the animals under their care. I think this would be a fabulous form of enrichment."

In the course of her research, Pebsworth became enchanted with the baboons. This is an unusual view in South Africa, where they are considered a nuisance, as their habitats often abut human habitation, with disastrous results for baboons. Members of this highly intelligent species raid farms and break into homes, often wreaking havoc.

"Baboons are a challenge to live with," says Pebsworth. "They're very strong, smart and dexterous. In South Africa, baboons will enter homes left unprotected in search of highly nutritious and desirable items like bread, fruit and eggs. Their behavior is understandable, as a half a loaf of bread is equivalent to foraging for several hours."

Pebsworth's work also examines human effects on baboon troops. A primary issue is severe loss of wild habitat to farms and human habitation, a process that has been going on for centuries in South Africa. Other effects, which have led to human-baboon conflict, are the loss of natural predators like the Cape Mountain leopard and changes in food preferences as a result of the importation of alien invasive plants. 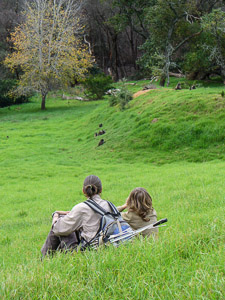 A proper census of baboons has not been conducted in the Western Cape for many years," Pebsworth says, "so current conservation management decisions are based on very old data." She noticed that locals, perhaps influenced by negative perceptions of baboons and the damage they can do to crops and homes, would often over-estimate baboon populations, claiming that they had seen hundreds when she counted only 50.

"If baboon populations have increased, I believe humans have contributed to this growth. First, it is possible that highly nutritious introduced plants like black wattle (Acacia mearnsii), constituting 30 percent of the Wildcliff diet, have improved baboon fitness and accelerated their reproduction cycle. Second, in an effort to control baboon populations, we are culling high ranking males that may actually keep populations in check," says Pebsworth.

Third, populations of Cape Mountain leopards, which historically controlled baboon populations in the Western Cape, have been decimated. She has observed leopards in Wildcliff on her camera traps and would like to further investigate how baboons and leopards influence one another's ranging patterns. She speculates that the remaining leopards may stay away from the troop due to the sheer number of baboons.

Another issue Pebsworth observed was how continued human modification of the landscape alters baboon behavior. Black wattle trees, originally from Australia, were planted around Wildcliff in the 1920's and grew unchecked for decades. To protect the fynbos – the indigenous plant community – and to conserve water, the government began a project to remove these thirsty invasive trees in 2008. In response to the eradication of this preferred food source in their home range, Pebsworth's troop found a thriving stand of black wattle more than 15 km from Wildcliff and started spending more and more time there. Normally, she explains, chacma baboons sleep on rocky outcrops, which protect them from predators and give them shelter from inclement weather. But the Wildcliff troop began sleeping in the black wattle trees, perhaps due to the distance from suitable outcrops and also because there are few leopards remaining in the area.

"We've altered both their diet and their ranging patterns," points out Pebsworth.

At Wildcliff, Pebsworth documented more than 85 different types of plants and insects eaten by the baboons, ranging from the protein-rich and high-fat black wattle seeds to grasses, flowers, fruits, mushrooms, ants, grasshoppers and termites. "While baboons are opportunistic and have an eclectic diet, my research demonstrated that baboons also have strong dietary preferences and are willing to travel great distances to reach these preferred resources. They will even change where they typically sleep."

It is these long day-journeys that put baboons in close proximity with humans. While some people are very tolerant of the animals, others are not.

"Someone has to stand up for the baboons," said Pebsworth in a 2009 interview. Today, she adds, "It's incumbent upon humans to think of ways we can coexist peacefully with them." 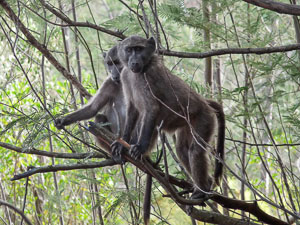 Baboons have lived on the Cape for 1.8 million years, and early humans surely learned from them. The Khoe-San, people indigenous to southern Africa "may have looked to the baboons to determine what was safe to eat." Pebsworth believes that ancient rock art, such as a sample found at Wildcliff and many others throughout southern Africa, reveals a close association between humans and baboons.

Pebsworth's love and respect for the baboons she studies is evident when she speaks of them. "They're funny and entertaining," she says. "It's unfortunate that humans have tended to lose our sense of humor."

She and her family once went outside to find lawn chair cushions and the garden hose on top of their roof. "You have to laugh about it," she says philosophically. "We tend to point the finger at animals for unwelcome behavior, but we should point the finger at ourselves. If you share space with baboons and you don't want them in your garden, don't grow fruit-bearing trees. If you don't want baboons in your house, close the doors and put on burglar bars. If you don't want baboons to chew off plastic roofing nail caps, which will result in a leaky roof, use metal nail caps. My dairy-farming neighbor has learned to feed his cattle after the baboons have gone to bed. We can live with these amazing animals, but it will require us to us to think creatively, embrace our uniquely human sense of connection with other species and take responsibility for their continued survival."

Pebsworth plans to return to Wildcliff in early 2013 to continue her research, focusing on how geophagy and the use of certain plants may help baboons maintain their health by keeping parasite burdens manageable.

Pebsworth's research could benefit humans, as well. She notes that in the modern era, "humans, especially pregnant women, are dissuaded from consuming soil. But for non-human primates, we acknowledge it as a medicament, akin to taking a Rolaids or Tums. We don't consider ourselves animals anymore, but we are part of the animal kingdom. Perhaps, if we can view soil in that light, we can decrease our reliance on allopathic medicine, find a more natural way to maintain our health and continue to learn from animals."