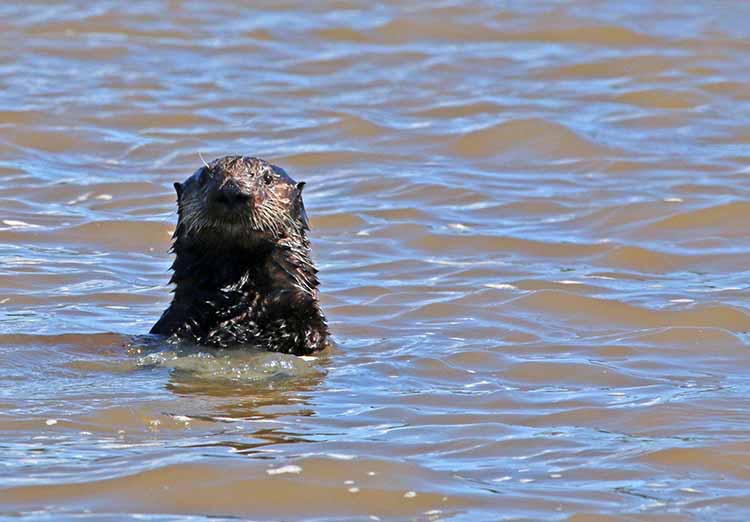 I stood atop Yampah Hill with Kerstin Wasson, Research Coordinator for the Elkhorn Slough National Estuarine Research Reserve (ESNERR). A large tidal creek wove through the marsh grass, its arms snaking this way and that, filling additional pockets with water that reflected the blue sky above.

From where we stood, Wasson pointed out the long, dark forms of sea otters. The handful of individuals we spotted from the hill were resting or engaged in grooming activities, taking advantage of the sheltered waters inside the estuary. In fact, people across the globe can watch the sea otters from a camera that live-streams a video feed on the Elkhorn Slough website.

Just a handful of years ago, this marsh and the harbor population of sea otters — now numbering over 100 individuals — was relatively unstudied. Today, the group makes up five percent of the California sea otter population, culminating in the highest concentration of this species along the coast. During volunteer monitoring for an Elkhorn Slough restoration initiative, Ron Eby stood exactly where I had. As a citizen scientist, he monitored species that could be affected by restoration construction. While he worked, he was struck by how many sea otters he saw within the marsh, as well as how consistently he spotted them, and described his observations to Elkhorn Slough staff.

My first morning at the ESNERR, I met Eby down at Moss Landing Harbor near the spot where the estuary flows into the Pacific Ocean. Eby took us out on a small boat to allow a safe, up-close tour of the wildlife living within the wetland. A myriad of birds floated on the water or stood on wooden pilings. Harbor seals rested on a sandbar, sticking their heads out of the water before sliding off and beneath the waves. On the docks of the marina, sea lions lay atop each other like sardines, in all sizes and shades of tan, yelping before settling down for a snooze. And, of course, we found sea otters. 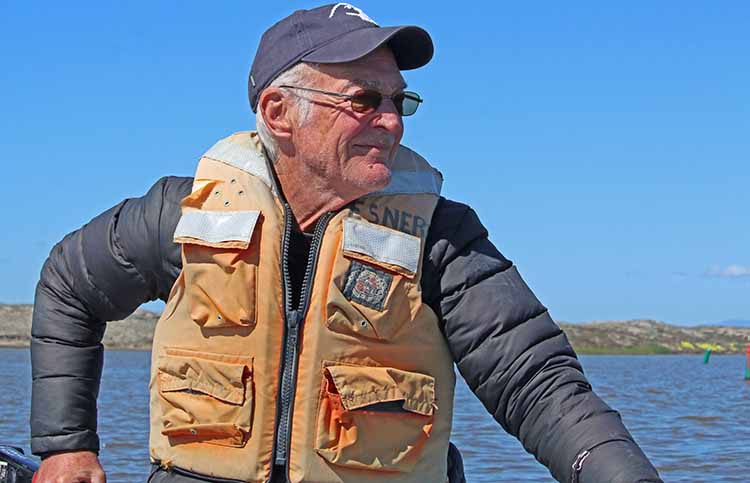 Sea otters are marine mammals, spending their entire lives in saltwater as they dive beneath the waves for worms, crustaceans, abalone, sea urchins and more. Their unique habits, including flipping over on their backs and manipulating food in their paws, have endeared them to the general public. For example, sea otter characters are part of the immensely popular Finding Dory film, which grossed over $1 billion worldwide.

I couldn’t keep a grin off my face. One group of otters remained clumped together in the shadow of a spit of land running between the harbor and the ocean, the otters carefully staying out of the wind. Others actively foraged, popping up mere feet from the boat with fat innkeeper worms, munching on their meals before slowly floating away on the current.

Sparked by Eby and other citizen scientists’ observations, a collaborative research team at Elkhorn Slough conducted a multi-year observation of the otter species, including regular monitoring by volunteers and staff. Veterinarians performed health checkups on 20 sea otters that were fitted with radio transmitters and temperature recorders so their movements could be tracked in real time.

Elkhorn Slough researchers and volunteers documented an estuary population that was thriving, spending less time in active feeding, and more time out of the water, relaxing. 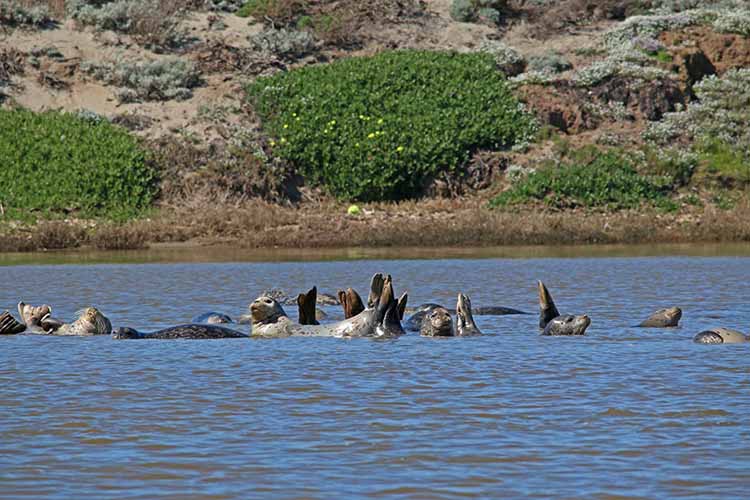 Elkhorn Slough is home to a variety of wildlife, including these seals.

Scientists at Elkhorn Slough recently announced a novel conclusion: Sea otters promote the growth of eelgrass. How? A paper by Hughes et al. explains: “Grazers that remove algae from seagrass are favored by decreased crabs resulting from otter predation. Recovery of top predators can thus support resilience of coastal vegetated ecosystems.” Simply put: otters eat crabs, so more algae-eating creatures survive on the seagrass. And because there is now less algae, the seagrass does better and expands into new areas.

When colonial settlers reached the west coast, they decimated the sea otter population, nearly driving this creature to extinction. By the 1930s, the 50 individual otters that remained near Big Sur did so because they found safety in the ocean along steep cliffs, far from the risks of hunters. Only after hunting was outlawed did sea otter populations begin to recover.

The discovery of how extensively otters interact with salt marshes was monumental for two reasons. First, re-imagining sea otters as a marsh and estuary species brings a new perspective on the open coast behavior we thought was “normal,” but that was really a result of human pressure. Will more sea otters enter estuaries? Elkhorn Slough staff will continue their research as more questions pop up about the sea otters.

Second, citizen scientists played an important role in this discovery. The dedicated volunteers noticed the presence of the sea otters, and then became an integral part of the monitoring team during the multi-year study. Their diligence and dedication to the sea otters demonstrates the critical importance of citizen science in today’s ecological studies.

From our short trip on the water, I can see why Eby loves to work with the sea otters and within Elkhorn Slough. From the birds and otters to the seals and sea lions, the possibilities for observation and study seem endless!

Photos are owned by Erika Zambello, and cannot be used or reproduced without permission.