First thing on Monday morning, I get into the driver’s side of the Land Cruiser, grasping the “holy sh*t” handle to hoist myself up into the seat. My field team clambers into the back; the other front seat is piled high with scientific instruments, carefully arranged in mounds so that nothing jostles around too much. To the team’s benefit, though, the view on our half-hour drive to our field site is far better from the open-air seats in the back. They’re much more likely to get smacked with a wayward acacia branch, but all in all it’s probably worth it for the 360-degree panorama of the Kenyan savanna we’ll be driving through.

I put the keys in the ignition and start her up. The engine rumbles to life and, with it, the dulcet tones of... wait… it can’t be… Backstreet’s Back? (All right!)

I hear peals of laughter from our field manager in the back seat, as it becomes clear I’ve discovered that one of the Land Cruiser’s two resident cassette tapes is already in the tape deck. It’s the Backstreet Boys’ eponymous album from 1997. I crank it up and, with the wind in our hair, we set off through the gates of the Mpala Research Centre to take on another day of ecological field work. 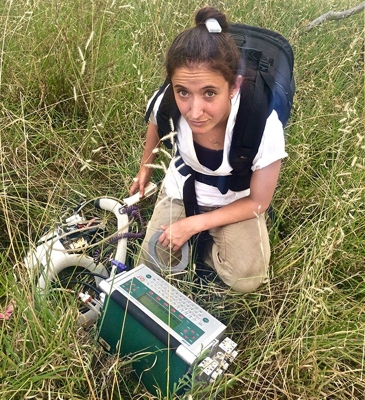 While our lab’s possession of a Backstreet Boys tape might seem like a trite observation of life in the field, it is precisely the kind of thing that makes doing work with a cohesive team such fun. Every day, I recognize how lucky I am to be here in Laikipia County, Kenya: as a PhD student at UC Santa Barbara in the US, I get to explore the savanna alongside friends and colleagues who are as interesting as they are interested in each other’s work. Writ large, the researchers in our lab study the indirect effects of the loss of large wildlife. This is particularly important in the Anthropocene, in which human-mediated wildlife conflict preceded what is now being recognized as our planet’s sixth mass extinction. While the direct effects of the local and global extinction of large-bodied animals are obvious (their absence in the landscape, etc.), the indirect effects are far more cryptic. Researchers in our lab study a variety of these effects, such as disease transmission, responses of small wildlife populations, and interactions with climate change.

My research interests lie at the intersection of large wildlife loss and ecosystem carbon dynamics. Traditionally, the quantification of how carbon is stored and released from an ecosystem does not incorporate the impacts of large wildlife; it’s determined by incorporating the physical properties of the system (nutrient cycling, etc.) with the carbon drawdown effects of photosynthetic organisms (like grasses and trees) and the carbon release of microbial organisms. So, little organisms are “counted”; big ones are not. However, it is clear that large wildlife loss, especially as pervasive a phenomenon as it is today, causes myriad cascading effects on ecosystem structure and function that go far beyond their simple absence. I’m interested in how their loss impacts the way carbon dynamics operate on a large scale: how much is released from the ecosystem into the atmosphere? How much is sequestered above and belowground as plant biomass? Does that change with the presence or absence of large wildlife, and if so, how?

The team of researchers I’ve been working with and I have started to investigate these questions here in Kenya, where you can find some of the last intact communities of mega-wildlife left on the planet. Not only are there large animals, but they are some of the most charismatic ones you can think of: elephants, zebra, giraffes, kudu, lions and all the other animals that you probably read about growing up. (The first time I saw an elephant as I was driving up to my now-field-site, I hung out of the passenger window from the waist up, snapping photos as fast as I could. Fortunately, now I know that the likelihood of seeing one or many elephants on a drive is high... though that doesn’t stop me from the occasional window-hang.) 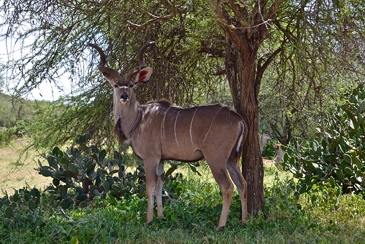 But these charismatic communities are threatened with extinction, on both local and global scales. Human-wildlife conflict is a pervasive problem in East Africa, with poaching perhaps the most high-profile issue. Another danger, however, is quieter and equally insidious: land-use change, from natural landscapes to those used as rangelands for cattle herds. Land-use change is one of the biggest purveyors of large wildlife loss worldwide. That means that not only should we be cognizant of the impacts of wildlife loss, but also of the effects that the subsequent encroachment of managed livestock will have in conjunction with that loss. That’s what I’m interested in studying at Mpala: the impacts of large wildlife ‘loss’ (experimentally accomplished through electric fencing) on the system’s carbon dynamics, as well as the possible compensatory (or compounding) impacts of the presence of cattle. I’ve been doing this by measuring the carbon output that comes from the soils in each of these experimentally manipulated plots of land at Mpala, those with large wildlife and those without. This summer I’ve embarked on efforts to measure those rates in the field, in order to get an idea of what variables are important when it comes to carbon exchange between the ecosystem and the atmosphere.

So, for today, that means the Backstreet Boys blaring on the way to our site. As whatever-his-name-was (the one with the penchant for ribbed turtlenecks, maybe) launches into a highly questionable rhyme between “where” and “fear” (successful only due to the late-90s trend to sing like you’ve got a straw up your nose), I spy a group of zebra out of the corner of my eye: a mixed herd of the rare Grévy’s zebra and the more common Plains zebra. Every time this happens, I slow down so I can stare as we drive by. Observations like this won’t make it into the “methods” sections of scientific papers I write about my work in the future. Similarly, I’m not sure it’s kosher to mention what 90s heartthrobs’ cassette tapes were listened to in the making of my science. But as another scientist said at breakfast the other day, these days in the field are the ones we spend months writing grants for, planning for, buying equipment for and dreaming of. I would happily listen to nothing but the Backstreet Boys for more chances to come out here, interact with large wildlife, dig into the dirt, and work on piecing together the complex and mysterious puzzle that describes how animals structure their environment.

Photos are copyright protected and may not be reproduced without permission. Photos are used with the permission of Elizabeth Forbes.