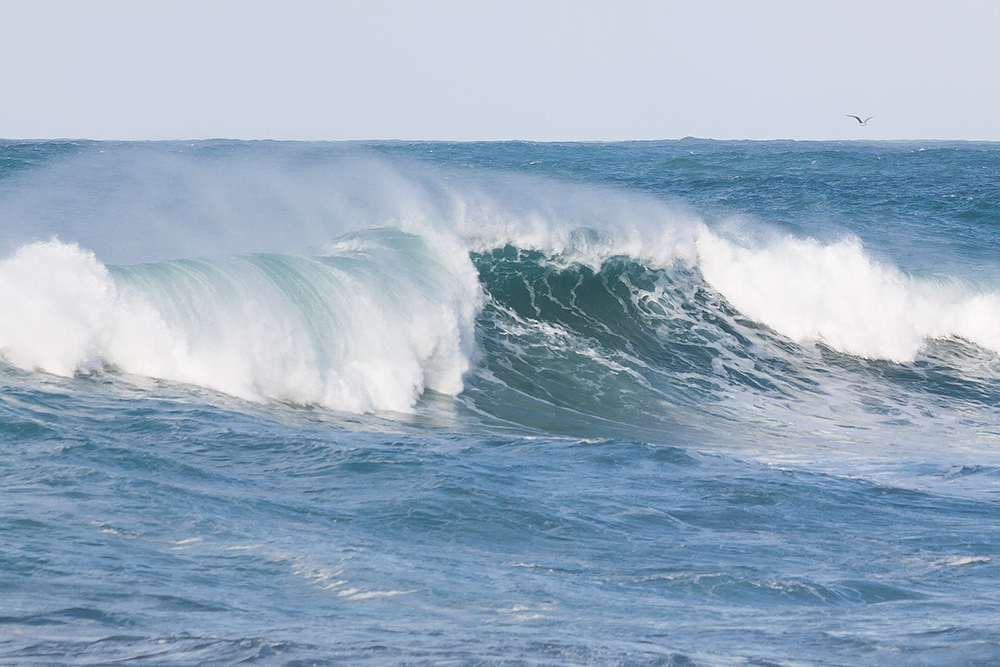 Flooding and storm surges are dangerous threats that became all too real for the entire state of Florida when Hurricane Irma struck on September 10, 2017. Living on the west coast of Florida, I was frantically preparing my home and family for Irma’s arrival. I vividly remember the stress and fear mounting as the storm slowly approached, and the sleepless night as 100-mile-per-hour winds screamed and howled around me. I also remember the relief once Irma had passed and I went out to assess the damage to my home and community. My family was very lucky, but so many others were not. I recall the images on the news of Miami’s Brickell City Center being underwater as Irma came onshore as a Category 3 hurricane, and images of the Alafia River overflowing its banks and flooding homes and businesses several days after the storm had passed. Those images were heartbreaking and distressing.

During times like these, a person’s sense of danger is heighted, and they are more aware of the threats facing their homes and businesses when awaiting a potential 10-foot storm surge on the shore. Yet there is another kind of danger that some people are unaware of: flooding on an otherwise beautiful, sunny day. “Sunny day flooding” is now occurring on a regular basis, and is a sign of what can happen as a result of climate change.

If you follow the news, you’ve probably come across articles written by prominent scientists who emphatically claim that changes are occurring in the Earth’s climate that could lead to devastating effects the world over. While the cause of these changes is a hotly debated issue in political spheres, there is no doubt about them in the minds of the people who are seeing these changes firsthand and having their lives irrevocably altered; to them, climate change and its effects are all too real. The sunny day flooding that is occurring in Miami and other cities across the state is evidence of those changes. Many Floridians live in cities and areas near the coast, areas that could see dramatic changes if sea levels rise as high as many experts are predicting. Florida is perhaps one of the areas in the United States facing the greatest risk. 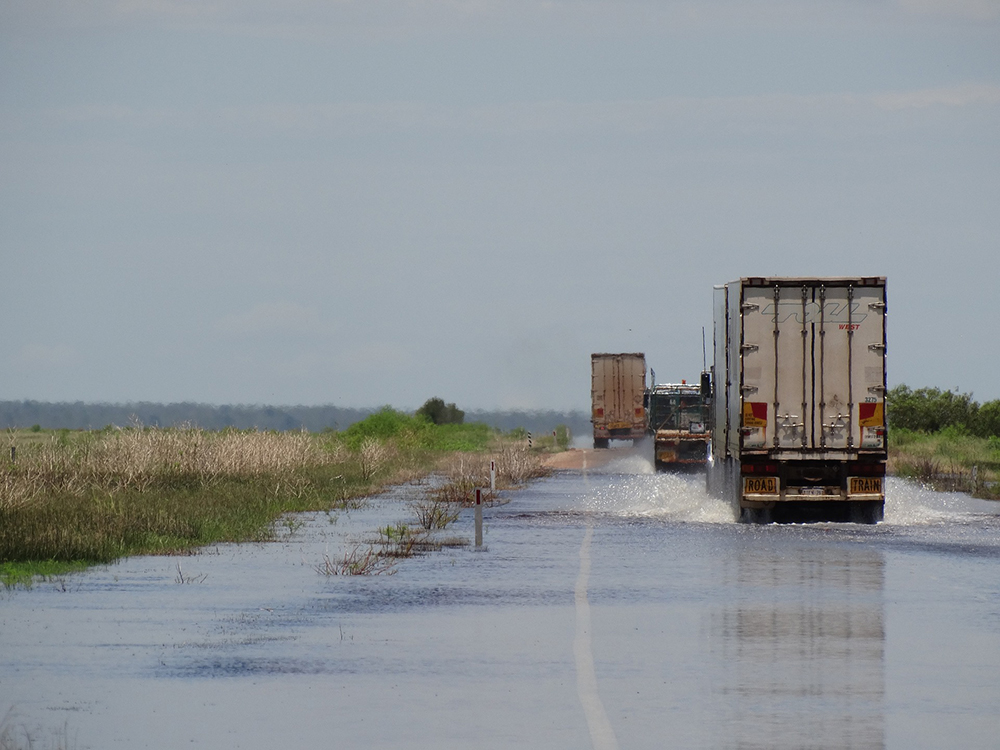 The majority of Florida is at sea level. The highest point of the state is Britton Hill, which is 345 feet above sea level. According to the Florida Ocean and Coastal Council, Florida has 1,350 miles of coastline, 4,500 square miles of estuaries and bays, and 6,700 square miles of other coastal waterways. Miami, where sunny day flooding has become a common occurrence, is only 6.5 feet above sea level. In fact, as described by Joey Flechas in an article published in the Miami Herald, Miami is planning to spend $400 to $500 million to raise the street levels by two feet, and install pumps, new water mains and sewer connections to build barriers against the encroaching waters.

One issue that Miami is facing with this planned construction is dealing with existing construction of homes and businesses that will be impacted by the raised sea barriers. Miami is now working with property owners to reach a compromise, and meetings are underway so that both sides may benefit from the proposed development. The steps Miami is taking to protect the city will have to be taken by other coastal communities throughout the state.

Sunny day flooding is occurring because the local tides are getting higher. Tides are affected by the alignment of the sun, Earth and moon. Due to rising sea levels, high tides are much higher than usual, and are flooding roads, homes and businesses, eroding beaches and causing sewage overflows. This type of flooding happens on days when not a single drop of rain has fallen. Sunny day flooding is especially problematic during high spring tides, or “King Tides”, which occur as part of the natural tidal cycle. King Tides are also getting higher due to rising sea levels. Sunny day flooding happens 10 to 20 times per year in Miami. It can even occur twice in one day, depending on the timing of the high tides. Tidal flooding is also occurring in Sarasota, St. Augustine and Manatee County. Some Florida residents have witnessed portions of the barrier islands near their communities going underwater. Scientists speculate that the cause of increased tidal flooding and rising sea levels is human-made climate change. 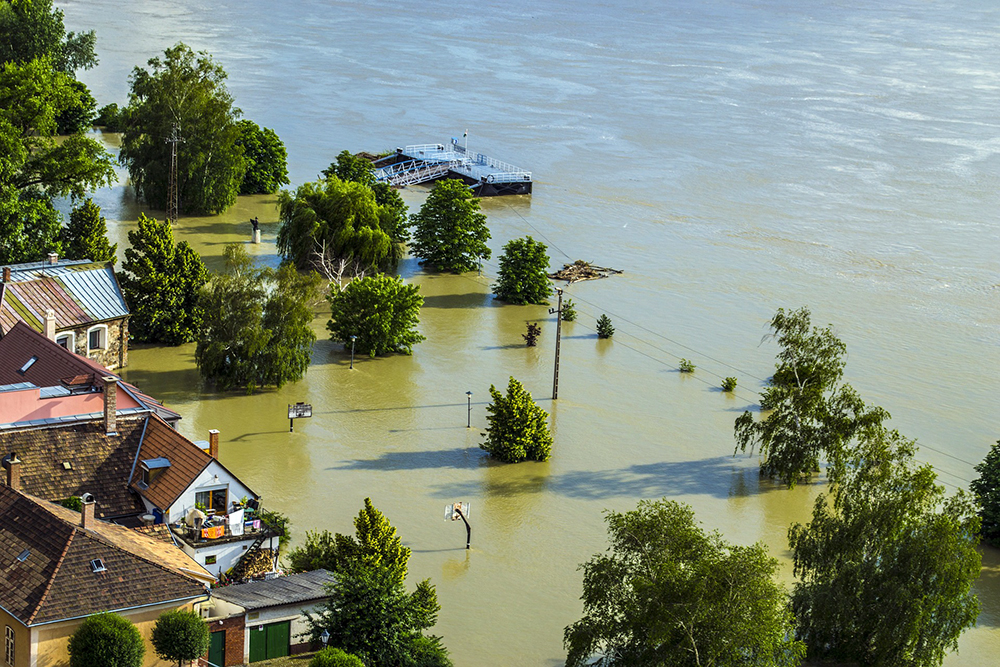 It is common knowledge that most of the water on Earth— 97 percent, in fact — is contained in the oceans. The remaining 3 percent is freshwater, and is found in rivers, lakes, groundwater sources, ice and glaciers. Much of that freshwater— a whopping 99 percent— is frozen in glaciers and ice sheets. Climate change is causing land-based glaciers and ice sheets to melt. It is also causing the thermal expansion of the ocean’s water. Greenland is covered by 660,000 square miles of ice sheets, and Antarctica has 5.4 million square miles of ice. In an article in Popular Mechanics, Avery Thompson describes how a part of the Pine Island Glacier the size of Manhattan broke off from Antarctica and floated out to sea in January 2017. The threat of the ice sheets melting plays a partial role in rising sea levels. Another component is the fact that there is no longer enough white surface at the poles to reflect sunlight back into space, leading to even more increases in temperature.

Due to the increase in the Earth's global temperature, these frozen sources of water will begin to melt and flow into the oceans through rivers and groundwater sources. This will raise the levels of the oceans around the world. Rising sea levels and the associated tidal flooding pose a direct threat to the state of Florida. The National Oceanic and Atmospheric Administration (NOAA) has speculated that Florida will face increasing occurrences of tidal flooding by 2050.

According to NOAA’s gauge stations around Florida’s coastline, the water is rising by a third of an inch every year. If this trend continues for the next thirty years, the effect on Florida will be devastating. The threats of rising sea levels and sunny day flooding affect not only the coastline, but also the rivers, bays, inlets and canals that run throughout the state. Florida’s water supply and water treatment facilities are also at risk. There are estimates that the seas could rise between 8 inches to 5.5 feet by 2070. Even a 3-foot rise in sea level would displace millions of Floridians from their coastal homes and devastate thousands of communities. 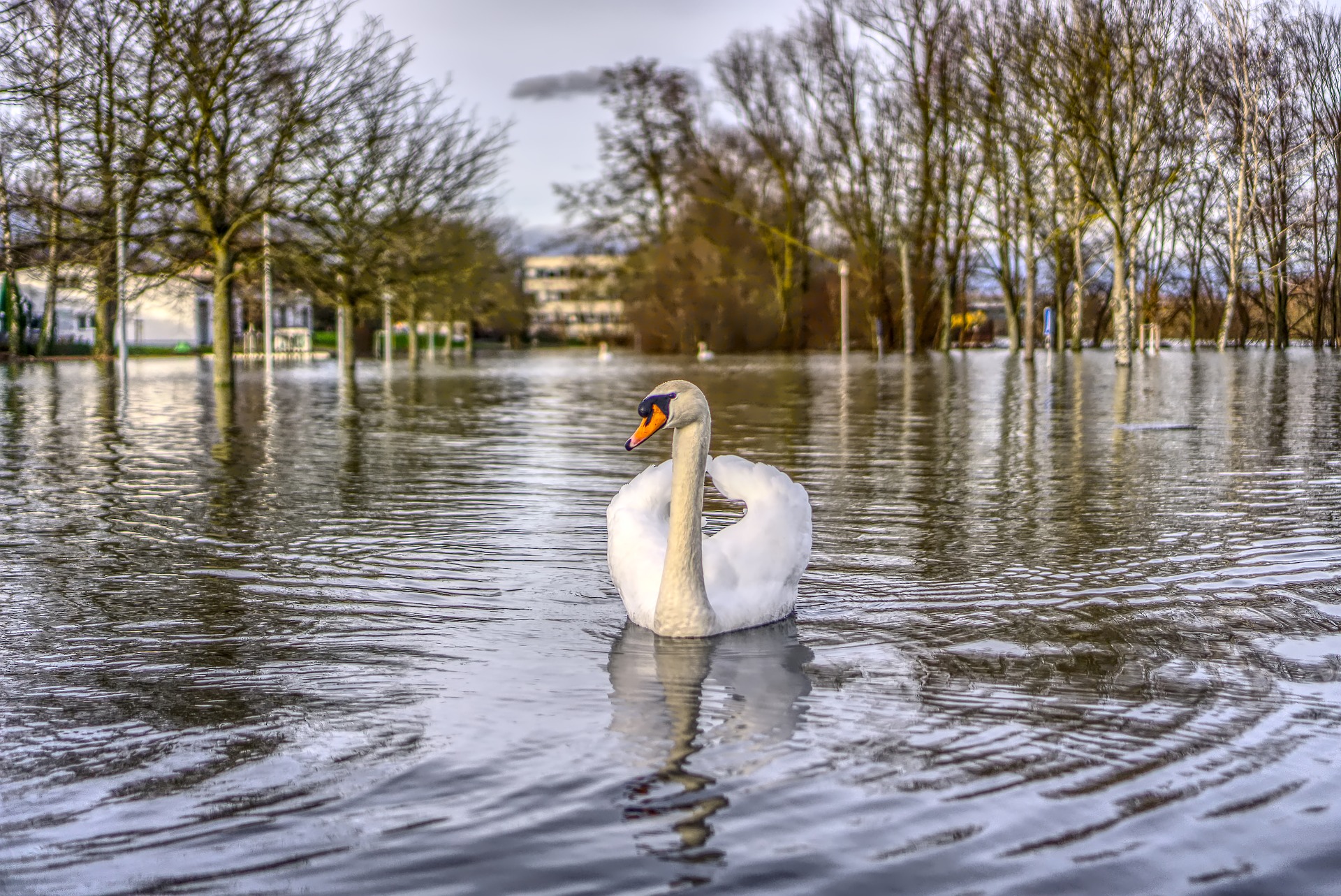 Not only are Florida’s coastal communities at risk, entire ecosystems and all animals are as well. These natural resources play an important role, economically and recreationally, in the state. The expense of property damages associated with flooding and construction efforts to stanch the floods is staggering, yet it must be done. The actions being taken by Miami are realistic, but, in my opinion, they will not stanch the incoming waters entirely. The citizens of Florida must act to protect their homes and businesses. Steps should also be taken to restore Florida's natural environment, such as the mangroves, barrier islands and beaches, to help renew the ecosystems that help prevent flooding.

Another example of the devastating global impacts that climate change and sea-level rise could have was detailed in an article published in The Guardian that described a recent joint study by the US Geological Survey, the Deltares Institution in the Netherlands and Hawaii University. In their review of potential sea-level rise, which also included a study of the effects of wave-driven flooding, they concluded that residents living in low-lying areas, especially the small islands and atolls in the Pacific and Indian Oceans, could be displaced from their homes by the rising sea level and contamination of their freshwater supplies with salt water. Because of this, hundreds of thousands of people in these regions are at risk of losing their homes and having to evacuate for higher ground.

The study is not the first of its kind, nor is it the first warning of the negative impacts that many people will be facing due to climate change. Other evidence was described in a CBC radio interview with Anote Tong, the former president of a small island nation in the Pacific Ocean called Kiribati, where the effects of sea-level rise are already happening. Citizens of the island nation have been forced to evacuate their homes because the water is encroaching onto the island. They are the first “climate change refugees.” Tong has become their voice and is trying to raise awareness of the effects that climate change is having on these small islands that, like Florida, are facing the risk of being completely submerged. Tong is also consulting with various countries, such as the United Arab Emirates and Japan, in developing land-reclamation technologies that could help small island nations in their battle against the rising tides.

People in Florida and around the world need to be realistic about their carbon footprints and take steps to reduce their impacts on the environment. No matter your opinion on the causes of climate change, the Earth's systems are changing, and steps must be taken to adapt and mitigate the threats we are facing. 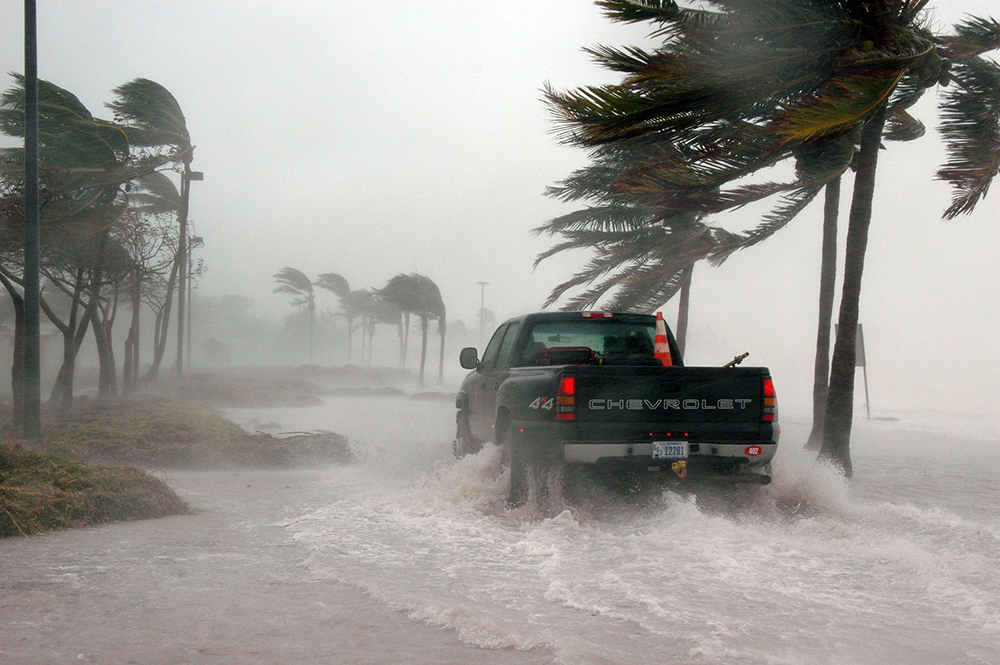 As I stated at the beginning of this article, I became very aware of the potential for flooding and storm surges as Hurricane Irma crawled her way up the state of Florida. Like many people, I was anxious and nervous that my home and family would suffer irreparable harm from the storm’s wrath, not just from heavy wind and rain damage, but from the possibility of a 10- to 12-foot storm surge coming onshore, as was being predicted by local meteorologists. After Hurricane Irma passed, my fear and anxiety, like the flood waters, receded and my heightened awareness of the issue dwindled away; the thought of sunny day flooding and rising sea levels didn’t even cross my mind. However, after reading articles about sunny day flooding in Miami and the devastation that residents of small island nations are experiencing, my awareness of the issues associated with climate change was once again raised.

Perhaps it is human nature to only become concerned about issues when they are right in front of us and having a direct impact on our lives, and I am no exception. If we are to have any hope of helping those who are so adversely harmed by the effects of climate change, however, we must all make efforts to reduce our carbon footprints and support those who are discovering ways to live more sustainable and renewable lives.

The thought of flooding on a sunny day didn’t seem possible to me, but it is now a reality for many. The next time I come across flood waters during high tides in my home state, I will understand that they are evidence that climate change is happening, even when not a single drop of rain has fallen from the sun-filled, cloudless sky.